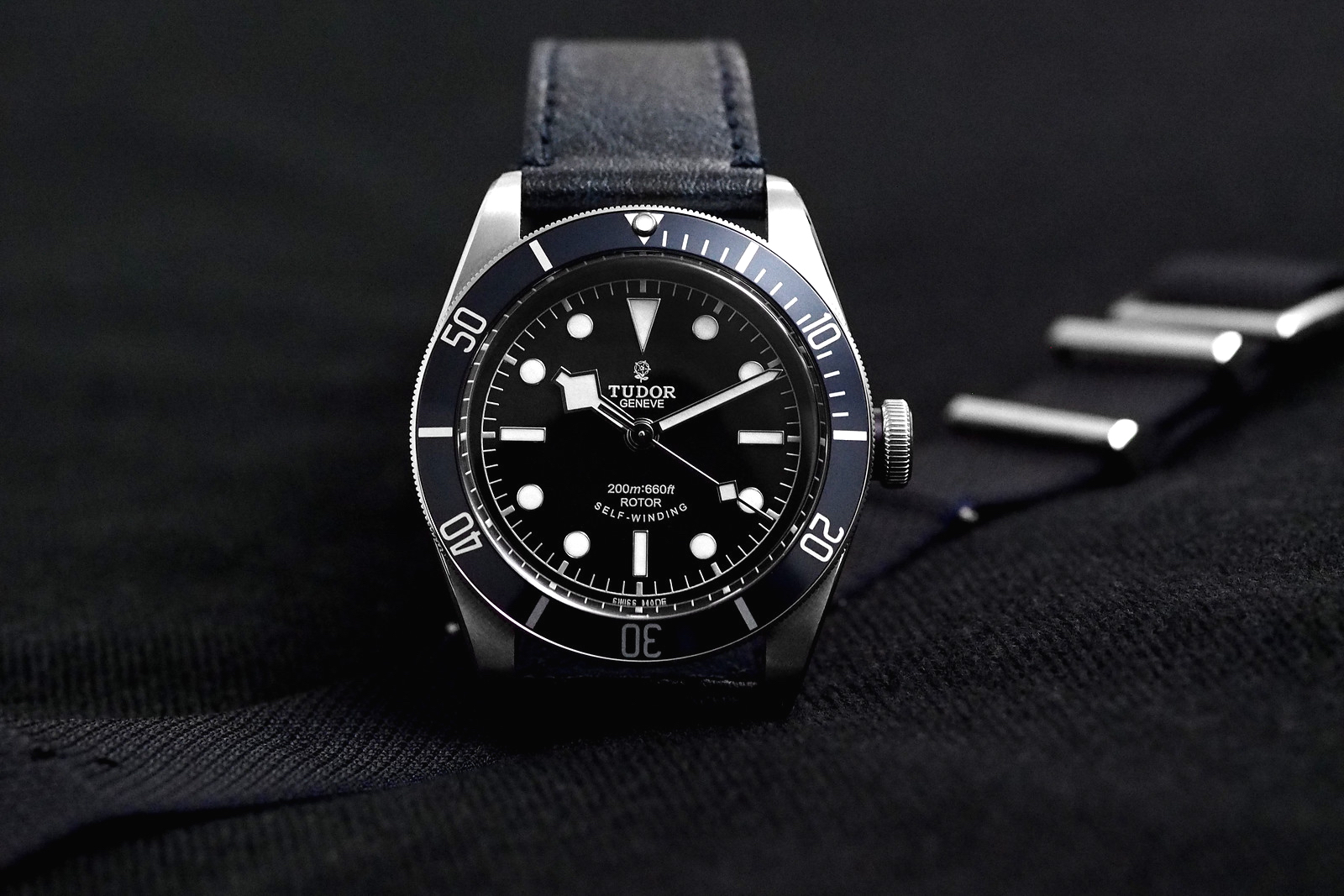 Dating back to the original Tudor Submariner from 1954, the Tudor Heritage Black Bay is a contemporary timepiece, inspired by the first Submariner, as well as taking design cues from virtually all subsequent Submariner models.

Aesthetically, the Black Bay case and hour indexes come from the original 1954 reference 7922 Tudor Submariner. However, it’s the reference 7924 from 1958, dubbed the “big crown,” that inspired the oversized crown seen on the current model. And as for the “Snowflake” hands, they first appeared on references 7016 and 7021 from 1969.

In the second half of the 20th century, the French Navy used Tudor diver’s watches, and they were generally blue. This explains the midnight-blue bezel, the matching blue anodized aluminum ring around the crown, and even the optional midnight-blue distressed leather strap.

As mentioned above, the dial design is based on the original 7922, except the hands, which have the iconic “Snowflake” design from the 7016 and 7021.

It’s a rugged and versatile daily wearer that looks just as good with a pair of board shorts, as it does a t-shirt and jeans, or a suit.

Like the 7922, the new matte dial has a large triangle marker at 12 o’clock, baton indexes at 3, 6 and 9 – and circular indexes for the other eight hour markers. However, while the original hour markers were printed on the dial, the Black Bay has applied indexes, with metal surrounds that are filled with luminous material. Moreover, the surrounds are polished, resulting in a perfect contrast against the matte black background and adding great depth to the dial.

Until the Black Bay, the most recent Tudor Submariners were produced up until the 1980s, and they came both with or without a date. This time around, the date was omitted on all models, which is something that has become in vogue across the industry the past few years. However, it is more than just a trend. By removing the date, which is arguably a superfluous function for a dive watch, the result is a cleaner, more elegant and symmetrical watch face. And most importantly, it makes it easier to read the time, the primary function of any good watch.

Protecting the dial is a domed sapphire crystal, not quite a tall as vintage models (which were thick plexiglass or sapphire, depending on the year), but still tall enough to stand out, and provide a vintage nod.

While Rolex is separate from Tudor, in the 1950s, the Tudor Submariner was launched alongside the Rolex Submariner, which first came out in 1953, reference 6204. Back then, Tudor cases, crowns, and bracelets were all made by Rolex. Tudor watches even came with famous Rolex crown logo relief engraved on the crown.

Modern Tudors no longer use Rolex cases, crowns, and bracelets, however, as we mentioned above, the case is strongly inspired by the vintage designs (they were used by both Tudor and Rolex). And that is a good thing.

The Heritage Black Bay comes in a 316L stainless steel case that measures approximately 41 mm in diameter by 12.75 mm in height and 50.25 mm in length. The width at the lugs is 22 mm. Total weight with the leather strap is 103.2 grams. The matte blue bezel insert features a 60-minute dive scale that rotates unidirectionally (a prerequisite of the ISO 6425 dive standard). A dot at 12 o’clock allows you to keep track of your dive time in low-light conditions. The coin edges of the bezel are polished, which contrasts with the top of the case and lugs which are satin-polished. The case flanks, lug sides, and chamfered case edges, are fully polished, creating the perfect juxtaposition of the two surface finishes.

Similar to the dimensions of the Big Crown (7924), the Black Bay’s large stainless steel crown measures about 7.95 mm in diameter. And there are no crown guards, a nod to both the 7922, 7923 and 7924. A blue anodized aluminum tube sits in between the crown and the case. The crown features a double locking system to ensure water-resistance. It is engraved with the Tudor rose emblem and polished. Operating the crown is very easy to do and one of the advantages of its oversized design. To my surprise, even though the crown is large, I did not find it protruding into my wrist whatsoever.

Just like its predecessors, the Black Bay uses a movement from ETA, as opposed to an in-house movement (such as what is used in Rolexes for instance). The advantage of this is clearly a much more accessible price point. And ultimately, this watch is more about the design than what is underneath.

Not to say what is underneath is bad as Tudor used a top grade ETA 2824-2, which is a robust and reliable workhorse. It’s a 25 jewel automatic that beats at 4Hz (28,800 vph), has hacking seconds and a 38-hour power reserve. The mainplate and bridges are decorated with a perlage finish and the Tudor-signed rotor is decorated with Geneva stripes.

This is not a chronometer movement, however, since it is the top grade it does feature upgraded barrel spring, shock protection system, pallet stones, balance wheel, hairspring, and regulator mechanism. Plus, Tudor has tested made adjustments and regulated it to a higher level at their own workshops.

(Editor’s note: Tudor just launched a brand new in-house caliber at Baselworld 2015 that’s already being used to power the Pelagos and North Flag. This means it will likely be incorporated into the Black Bay collection at some point in the near future, along with an impressive 70-hour maximum power reserve.)

We recently spoke with Davide Cerrato (Head of Marketing & Product Development at Tudor SA) about the Tudor Heritage Black Bay collection, and this what he had to say, “The strongest point on Black Bay to me is the fact that it embodies the most extreme application of the heritage strategic design approach. In effect, it not only refers to a specific past model but “collects” all the best design details in Tudor diving watches history and put all of them together in one watch. Normally this would be the perfect recipe for a Frankewatch. But here through our unique reinterpretation approach, blending past design hints and adding contemporary, ones, it became the most successful watch of our collection to date and the most iconical.”

Weighing in at 103.2 grams with the strap, the watch is relatively lightweight for a modern stainless steel sports watch. For instance, the Omega Dark Side of the Moon, which we reviewed HERE, has a lightweight ceramic case and still weighs only 10 grams less at 90.4 grams.

In comparison to the Tudor Ranger, the Black Bay has about the same dimensions across the face, however, because the Black Bay’s bezel is thicker, the Ranger looks noticeably bigger on the wrist. Not to mention, because the Ranger crown protrudes out far enough to dig into your wrist, whereas I did not notice the flatter crown on the Black Bay digging at all.

The Black Bay comes with a choice of a blue aged-leather strap with pressure folding clasp or a satin-finished steel bracelet with folding clasp. To me, the leather strap is the best option as it looks better and is more comfortable than the metal bracelet, and costs $325 less. That said, the included Nato-style cloth strap (that you get regardless if you pick the leather strap or metal bracelet), is perfect for the beach, pool or on a boat. Oddly, unlike traditional Nato straps that can slide on and off without a tool, it is secured to the case via traditional spring bars (so a tool is required). And if that is one of the only flaws I can find and a minor one at that, it shows how good the Black Bay has been executed.

Reminiscent of classic Tudor Submariners, from the dial to the case to the Snowflake hands – the Heritage Black Bay’s design elicits the nostalgia of iconic Rolex and Tudor dive models from the past. Successfully combines vintage-inspired design cues with modern watchmaking. The result is not a Submariner, but something very close – from the same bloodlines. A contemporary version.

The Black Bay is as aesthetically pleasing as it is comfortable on the wrist, especially with the leather strap. It’s a rugged and versatile daily wearer that looks just as good with a pair of board shorts, as it does a t-shirt and jeans, or a suit. I highly recommend it. 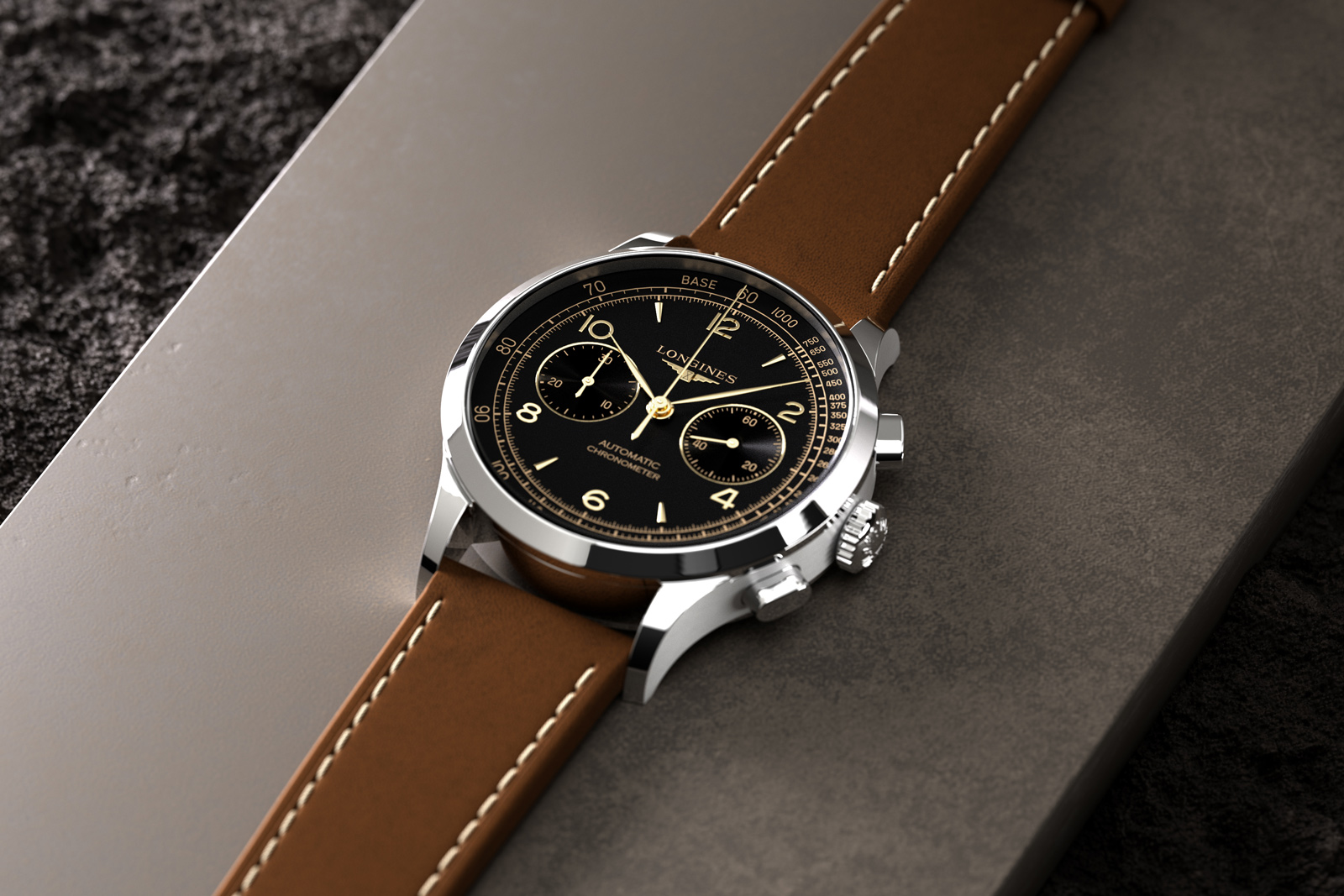