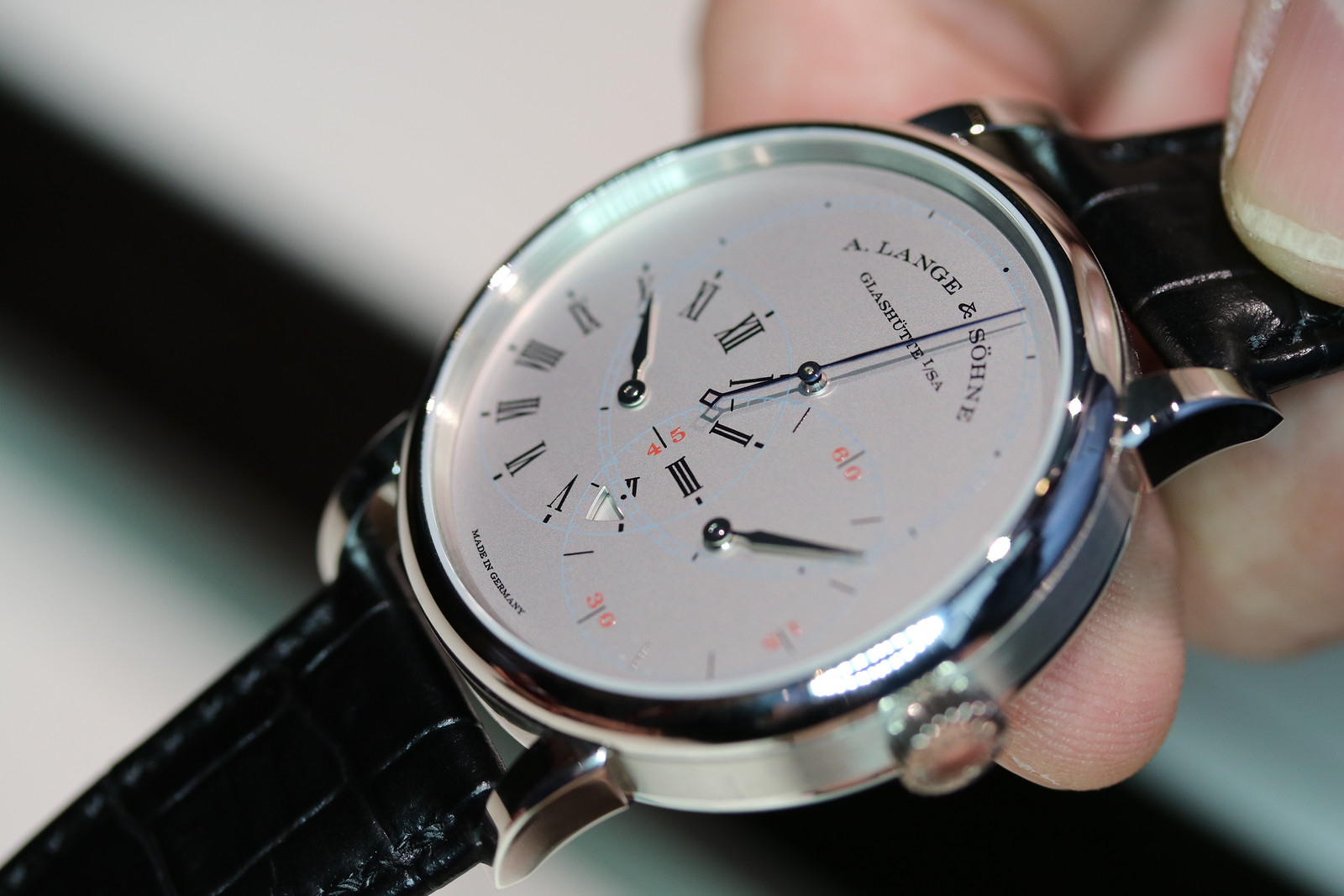 One of the most interesting Lange debuts this year was the Richard Lange Jumping Seconds. Introduced at SIHH 2016, the watch is distinguished by its regulator dial that separates the hours, minutes, seconds on separate axises. Most importantly, the seconds hand, in particular, “jumps” in one-second intervals. At first glance, you might think it is quartz movement that powers the hands, particularly because the seconds hand on a quartz watch also jump in one-second intervals, instead of smoothly sweeping like the majority of mechanical timepieces. But this is far from quartz.

Driven by a one-second constant-force escapement, the so-called “deadbeat” seconds feature, when combined with the zero-reset mechanism, makes it so you can out the crown, instantly causing the seconds hand to jump to 12 o’clock and stop, allowing you to quickly and precisely synchronize the timepiece. And thanks to the constant force, the amplitude is consistent throughout the entire 42-hour power delivery, further increasing the accuracy of the timepiece.

Whether calculating sidereal time, geographical longitude or taking a pulse, it is convenient to be able to read time in full seconds. Further, being able to accurately set the seconds, and view the time (hours, minutes, seconds) in separate dials, allows greater accuracy, which was historically important, and this is why watch factories and scientists alike, used regulator dial timepieces.

“The jumping seconds mechanism has played a pivotal role in A. Lange & Söhne’s history. After all, Ferdinand Adolph Lange developed a “one-second movement with a jumping hand” as early as 1867. Ten years later, the newly founded Imperial Patent Office granted one of its very first patents for his invention to the manufactory,” according to the manufacture.

The regulator layout features three distinct, overlapping displays, with transferred chapter rings on the solid silver rhodié-colored dial. The hours and minutes hands are in rhodium treated gold, with a blued-steel seconds hand. At the intersection of the three displays is a triangular cut-out that

Ten hours before the power reserve is depleted, a red indicator – inside a triangular aperture in the dial where the hour and minute circles intersect – reminds the owner to rewind the watch.

Powering the watches functions is the all new manually wound (caliber L094.1), which beats a 3Hz and has a power reserve of 42-hours. The movement is made up of 390 components, 50 of which are jewels, including 8 screwed gold chatons. The plates and bridges made of untreated German silver and the balance cock engraved by hand. Everything is decorated and assembled by hand.

Furthermore, this caliber is made fully in-house, including the balance spring, and even the remontoir spring for the constant-force escapement.

The Richard Lange Jumping Seconds is presented in a platinum case – with a mixture of polished and brushed surfaces – that measures 39.9 mm x 10.6 mm. A black hand-stitched alligator leather strap with Lange prong buckle in platinum completes the look. Limited edition of 100 watches. (Ref. 252.025)