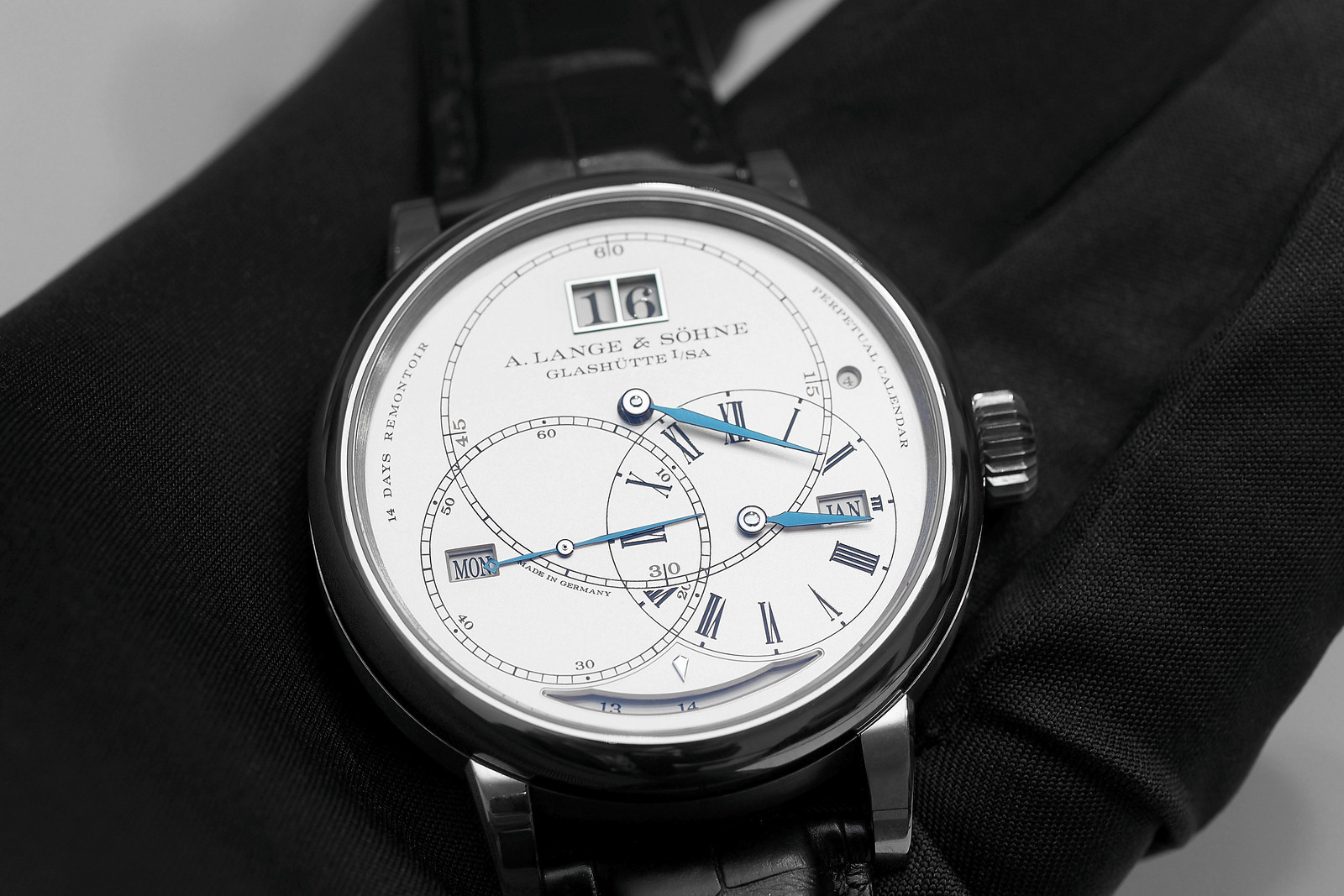 This is the new Richard Lange Perpetual Calendar “Terraluna.” Terraluna means Earth moon, and signifies that this is no ordinary perpetual calendar. In addition to a regulator dial which separates all of the functions into independent displays, this timepiece also has a unique world’s first orbital moon phase display, not to mention an impressive 14-day power reserve. Furthermore, it has a constant force escapement with remontoir spring.

The Terraluna is powered by the new caliber L096.1, which is, of course, manufactured to A. Lange & Söhne’s exacting standards. Every part is hand decorated and assembled. The three-quarter plate in made of untreated German silver, with Glashutte ribbing and circular graining. After being assembled and disassembled twice, the movement is precision adjusted in five positions. The balance cock is engraved by hand, and can even be custom inscribed.

There are 787 movement components in total, including 80 jewels and one screwed gold chaton. The assortment consists of a lever escapement and a shock resistant variable inertia screw balance with in-house Lange balance spring. It runs at 3Hz and can be adjusted with the precision beat adjustment system with lateral setscrew and whiplash spring. Twin mainspring barrels provide an enormous power reserve of 14-days (336-hours), and thanks to the 10-second remontoir, the torque is delivered consistently. The result is unvarying amplitude and high accuracy for the entire two week period.

Regulator dials were historically used at observatories as well as watchmaking factories, because they provided an accurate display of minutes and seconds, which was useful for synchronizing clocks. Like the Pour le Mérite, which was introduced in 2011, this particular regulator dial design was inspired by a Johann Heinrich Seyffert’s 1807 regulator from the world-famous timepiece collection of the Mathematics and Physics Salon in Dresden, Germany.

The timekeeping functions are shown via three individual displays. Minutes are shown at the top of the dial with a train track chapter ring and centrally mounted blued or pink gold hand. Hours are shown in the lower right quadrant with a Roman numeral hour ring and a blued (white gold model) or pink gold hour hand.

Seconds are displayed via the dial in the lower left quadrant with a blued or pink gold hand and train track second ring. The crown is used to wind the watch and to set the time. A power reserve indicator that is operated by a disc sits at the bottom of the dial and reads in days, not hours!

The result is a deep-blue surface studded with no less than 2116 high-contrast, sharply contoured stars on the celestial disc.

The perpetual calendar functions are displayed separately with an outsize date aperture at 12 o’clock. The day is shown at 8 o’clock. The month is at 4 o’clock. The small circular aperture on the right side of the dial is a leap year indicator. Three recessed push pieces on the left side of the case control the calendar displays and moon phase.

According to Lange, “The calendar is mechanically programmed to correctly display the different durations of the months in a year as well as those in leap years until 2100. The mechanism reproduces the synodic month of 29 days, 12 hours, 44 minutes, and 3 seconds so precisely that it takes 1058 years before the display needs to be corrected by one day.”

On the movement side, there is an orbital moon-phase display with day/night indication. “To achieve a vivid and aesthetically sophisticated image of the orbiting moon phase display, Lange’s product developers chose a special coating process. On the celestial disc, for example, interference effects absorb all of the non-blue color spectra of incident light. The result is a deep-blue surface studded with no less than 2116 high-contrast, sharply contoured stars on the celestial disc. The biggest one measures 0.85 mm and the smallest one 0.05 mm.”

The orbital moon phase disc depicts the earth’s northern hemisphere, and the moon’s orbital pattern, with the balance assembly representing the sun. The southern hemisphere is not represented on the actual disc, however, there is a simple hack: just look at the caseback with a mirror.

Lange offers both the pink and white gold version in just one dial, a solid silver, argenté dial. The pink gold version (Ref. 180.032) retails for $229,200 and comes on a reddish-brown hand-stitched crocodile leather strap with matching 18K pink gold deployant buckle. The white gold model (Ref. 180.026) comes on a black crocodile strap and retails for $230,400. This is not a limited edition timepiece, however, production is limited by Lange’s internal manufacturing capacity which is inherently low. Deliveries will begin this Fall.

This is a highly complicated timepiece and accordingly the movement takes up a lot of space, however, the Lange engineers were able to fit it into a very wearable case (45.5 mm x 16.5 mm). The Terraluna is technically impressive, and very elegant considering the substantial feature set. Moreover, in our opinion, it is one of the nicest, and most collectible, perpetual calendars on the market.