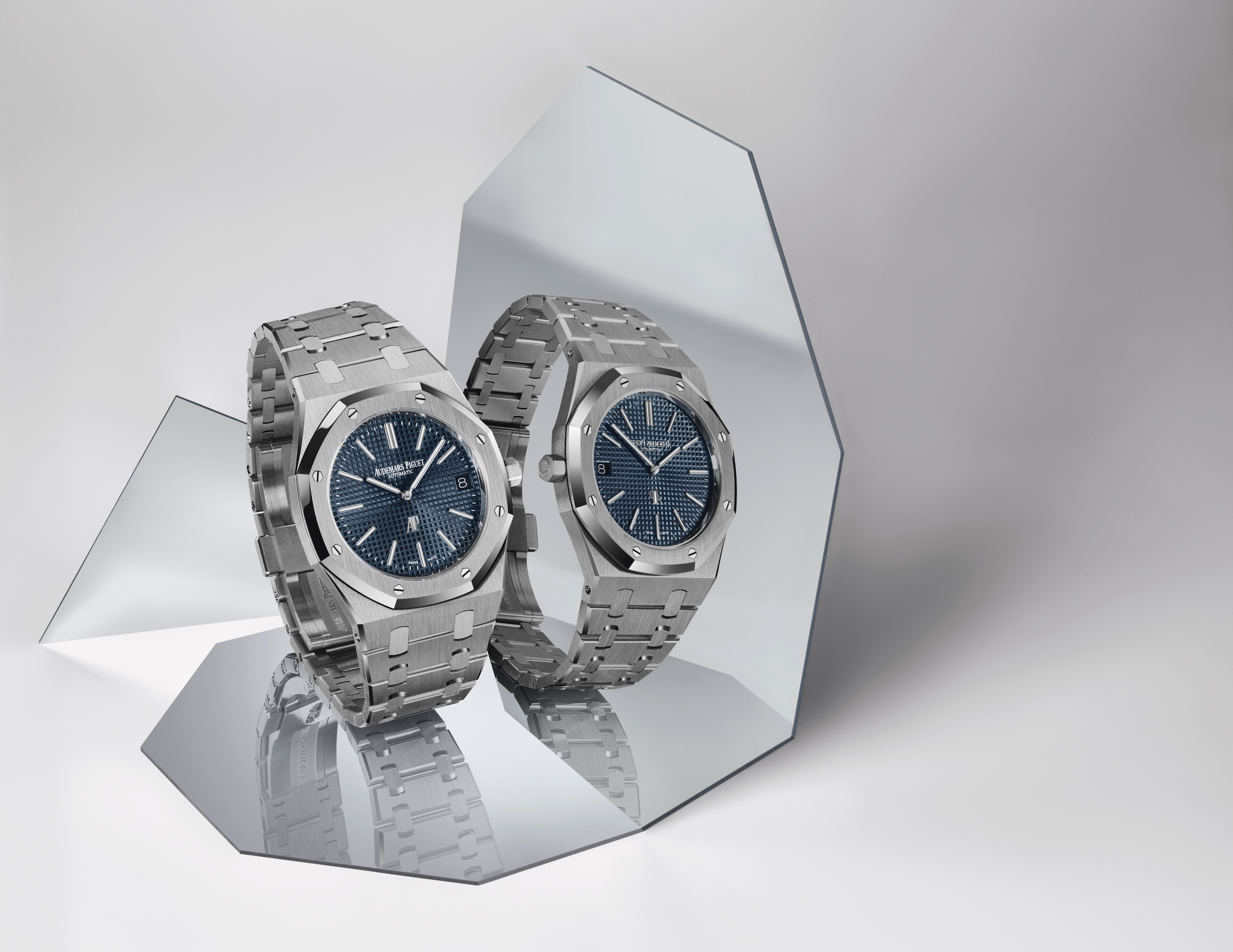 Designed by Gerald Genta in 1972, 50 years later the Royal Oak “Jumbo” is still one of the most recognizable and imitated timepieces ever created.

Arguably Genta’s greatest work of art, when the Royal Oak arrived it was far more revolutionary than the legions of watches that have followed. In that regard, not much has changed. The Nautilus — which was also designed by Genta — arrived four years after the Royal Oak, it currently carries a higher average resale value (the average list prices on Chrono24 are $200K vs $170K). However, the newly announced Jumbo could likely help close that gap or even place the Royal Oak at its rightful place atop the throne.

Introducing the Audemars Piguet Royal Oak “Jumbo” 16202. There are four versions of the new 39 mm Ref. 16202 Royal Oak Jumbo that will be available as part of the 50th anniversary (stainless steel – blue dial, rose gold – gray dial, yellow gold – brown gradient dial, platinum – green sunburst gradient dial), each with a specially designed 50th skeletonized oscillating weight. After 2022, some or all of the references will presumably become part of the regular catalog, sans the 50th Anniversary rotor and designation.

Three of the 16202 references have the traditional “true” Royal Oak tappisserie dial, made on old school lathes virtually the same way as they were 50 years ago. The fourth has a contemporary galvanized green gradient sunburst dial, which first arrived as a Jumbo variation as part of the now-discontinued 15202 collection last March.

The hand-applied AP emblem at 6 o’clock has been retained from the 15202 to 16202, however, it appears that regular non-Jumbo Royal Oaks (including the recently announced 37 mm update, the 15550), will no longer carry the double logos, instead, showing only the printed full “AUDEMARS PIGUET” at 12 o’clock. This helps further distinguish the Jumbo from the regular Royal Oak models. Another differentiator has always been that the Jumbo lacks a second hand — whereas the 15400/15500 and 15450/15550 have a sweeping center seconds hand — and that has stayed the same.

The Royal Oak, and in particular its octagonal bezel and angular case, are often imitated, although the unmistakable case angles, exceptional finishing, and fact that this was the first watch of its kind, will always make it an original design. As you can see in the image (above), the Jumbo even retains its unique pass-through construction which consists of eight perfectly aligned hexagonal-shaped screws, which go through the bezel, the case, and all the way to the caseback, secured on the backside with bolts.

Audemars Piguet’s Royal Oak bracelets are a thing of beauty, and neither the Nautilus bracelet nor any similar timepieces integrated metal bracelet can outdo arguably the best bracelet in the business. The design is just as distinctive as the case, and the way the facets of the hand-finished bracelet catch the light creates a sheen that’s incredible on the wrist.

Audemars Piguet is replacing the venerable caliber 2121, which was originally derived from Jaeger-LeCoultre intellectual property, and which powered the Royal Oak Jumbo for 50 years. The new modern caliber 7121 reportedly took 5 years to develop, and while the original dimensions of 29.6 mm x 3.2 mm were mostly maintained, compared to the 28.4 mm x 3.05 mm measurements of the caliber 2121, the caliber is slightly larger. Although, as mentioned above the external case measurements are the same, so the movement presumably fills in the case better, making the larger movement a positive.

As part of the technical changes, Audemars Piguet engineers upgraded the 2121 oscillation rate from 3Hz to 4Hz for the 7121. They gave the 7121 a 55-hour power reserve, up from 40-hours. The number of jewels has been reduced from 36 to 33, however, the total number of components is now 268 versus 247. This is due to added functionality such as the new rapid-date corrector function, the increased power reserve, dual traversing bridges (one for the mainspring barrel and one for the oscillating system).

The all-new free-sprung balance wheel, which is supported by a traversing balance bridge, instead of the outgoing 2121’s single-sided balance bridge, makes the movement much more robust, and resistant to shocks, while also enhancing the aesthetics. The extra bridge, supporting the mainspring barrel, is another unique innovation, that ensures the caliber 7121 is superior to the caliber 2121, in almost every way.

From luxurious Geneva stripes to the perlage on the mainplate and straight graining on the 22K solid gold skeletonized 50th anniversary rotor to the polished edges — everything about the new movement is the same or better than before. The only thing that is somewhat disappointing is that a movement in this price range has machine beveled and polished edges, which are made using the same CNC machining as used for the case, bezel, and bracelet. With annual production likely expected to exceed 60,000 units this year, Le Brassus presumably only invests in higher-level hand-finishing on lower quantity timepieces, such as the new Royal Oak Openworked Flying Tourbillon which uses similar CNC machining to the Jumbo but also features some hand finishing where required, such as the V-angles on the bridges.

Pricing has been increased, likely due to a mix of inflation, ultra-high demand relative to what Audemars Piguet is willing to produce per year, the resale price which is more than 4 times retail on the secondary market for the discontinued 15202, and the fact that Patek Philippe raised their prices to $30K+ for a Nautilus Jumbo 5711 before that was discontinued at the end of last year.

With the introduction of a watch that effectively maintains all the goodness of the Royal Oak, while simultaneously fixing one of the most neglected areas (the movement), Audemars Piguet has properly updated their Jumbo.