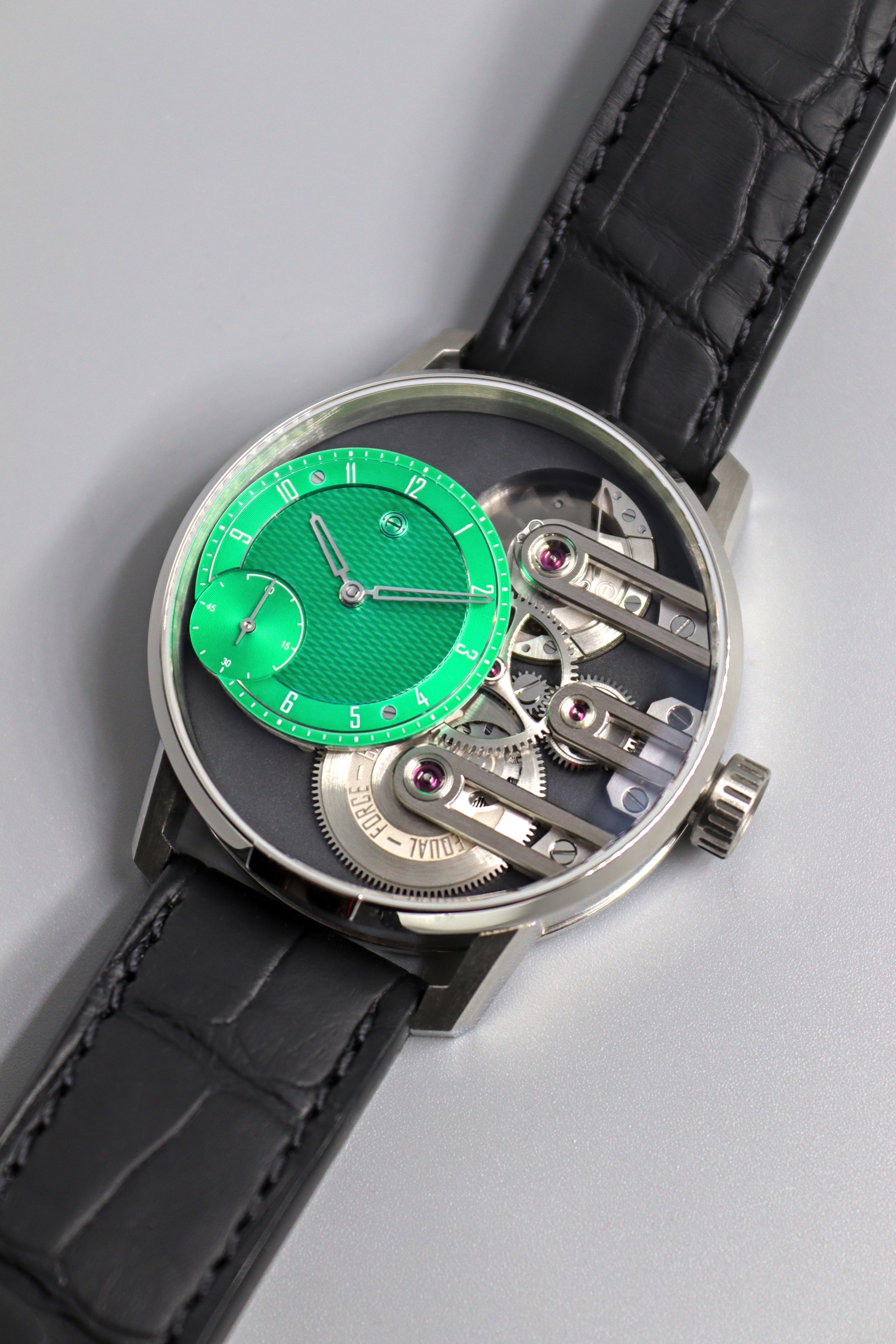 Armin Strom first introduced their Gravity Equal Force watch in 2019 but independent watchmakers are always the last to see this sort of thing. The watch is beautifully crafted, eye-catching, and I would be excited to wear it myself.

As a watchmaker, I try to keep my reviews focused on the technical aspects of the watch and let others expound on the design, wearability, and aesthetics of watches, and this one does have some interesting technical features which prove to give this watch a real advantage.

Despite its striking appearance, most of the watch’s engineering is very traditional. At its core, the watch is an automatic watch with a Swiss lever escapement but the watch is very well designed with isochronism in mind. Isochronism is the ability of a timepiece to maintain a constant rate independent of changes in the amplitude of the oscillator. In a traditional mechanical watch, there are several things which affect isochronism: material changes due to temperature, magnetism, influences of the escapement, influences of the regulating pins, poise of the balance, poise of the hairspring, friction, and external shocks. There are two main strategies for improving the isochronism of a watch. The first is to make design decisions that will minimize the effects of the items listed above, the second is to try and eliminate changes in amplitude. Two factors have the greatest effect on amplitude, the first is the torque delivered by the mainspring which tends to weaken as the mainspring winds down. The second is different amounts of friction present as the watch rests in different positions.

The watch features traditional mitigation techniques for many of the effects on isochronism. It houses a Swiss lever escapement with a flat hairspring and a free-sprung balance. That means there are no regulating pins or regulating arms to adjust rates but rather the rates have to be adjusted using weights on the balance wheel itself. This completely eliminates one of the factors that have an impact on the watch’s isochronism (regulating pins) and is a common strategy employed by many high-end brands. The balance wheel is well poised, reducing positional errors. They went traditional with the hairspring material which means it isn’t completely anti-magnetic but still maintains a high resistance to magnetism and to changes in temperature. It employs traditional shock resistance mechanisms. There is however one aspect of their equal force mechanism that is uncommon and that is the motor barrel. In most watches, the barrel rotates around its arbor as the mainspring unwinds, but in this watch, the barrel turns when you wind it and the arbor turns while the barrel remains stationary as the spring unwinds. This reduces the amount of mass that the spring has to move which allows it to operate with less friction and lower torque. The lower friction forces bring the watch closer to being isochronous and allow the barrel to use a thinner, but longer, spring extending the power reserve. This is not new technology as it was employed by American watch companies 100 years ago in their highest grade movements, but it is extremely uncommon today, especially in automatic watches.

The more exciting innovation in this watch is the equal force mechanism which operates with the goal to reduce the fluctuations in amplitude. As the mainspring in a watch unwinds the torque delivered diminishes. Watchmakers have developed innovations over the years to try and minimize this fluctuation.

The stackfreed was employed as early as the 16th century. It equalized the force of the spring in the least efficient way possible. The stackfreed utilizes an eccentric cam and a spring that applies an extra opposing force to the mainspring that reduces as the mainspring winds down. When the mainspring delivers the most torque the stackfreed applies extra friction to the system “robbing” some of the power. The end result is that a constant torque is delivered to the escapement but it requires a much stronger spring which results in more friction and excessive wear.

The fusee was the logical progression from the stackfreed. The end result is the same as the stackfreed, but without the extra friction. With a fusee the mainspring barrel pulls on a chain which is coiled around a conical sprocket. They are paired together such that when the mainspring is fully wound and has lots of force the chain pulls on the smallest diameter of the cone and as the mainspring unwinds it pulls on larger and larger diameters so that the torque exerted on the gear train and ultimately the escapement is constant throughout the runtime of the spring.

Stop works were often employed in combination with the stackfreed or fusee, and sometimes by themselves. The stopwork limits the unwinding of the spring so that it can never fully unwind. The least powerful and least consistent portion of the spring is unavailable to the operation of the movement.

The most common strategy employed today to equalize the force from the mainspring is to use high-quality metal alloys and a pre-tensioning of the spring with an S-shaped curve, both of which reduce the degree of variation in torque and are used by all brands.

Automatic watches have a distinct advantage over manual watches in this area as well. Instead of the torque decreasing throughout the course of the day as it would with a watch that is wound once in the morning, an automatic watch maintains consistent torque as long as the wearer is active and the energy lost from the running of the watch is restored by the motion of the wearer. Once the watch is set down (at night for example) it behaves like a mechanical watch, but if worn every day the watch doesn’t come close to encountering the end of the power reserve where there is the least torque and worst performance by the watch.

The Armin Strom Gravity Equal Force Mechanism combines the stop works with a modern mainspring and an automatic watch for the first time. Stop works had never been added to an automatic watch before because the traditional design doesn’t allow for the watch to continue winding beyond full wind as is necessary for an automatic watch. Previously, nobody had tried to solve that problem for the simple reason that if you wear them all the time the bottom end of the spring never gets used anyway. In today’s world where watch enthusiasts own many watches, automatic watches aren’t worn all the time, they do run down, and are sometimes placed on the wrist after having sat for 2 days at the point where they are barely running. The Gravity equal force mechanisms combination of a stop works with an automatic watch is clever. By combining the basic mechanism you would find in a power reserve indicator and the maltese cross you would find in a stop-work, Armin Strom has created a stop-work mechanism which allows the mechanism to declutch when fully wound while controlling the unwinding to limit it only to the most consistent part of the mainspring power delivery. As an added bonus the same mechanism can be used to indicate the power stored in the mainspring. The end result is a watch that keeps excellent time and starts running with great amplitude and consistent rates from fully wound until the minute it stops and comes right back to life with the first turn of the crown.

Most brands do a very poor job of describing their technical features, but Armin Strom put out an excellent video that describes the constant force mechanism.

I’m not one to accept a brand’s claims at face value so I developed a very practical test to test the brand’s claims and to examine the watch performance. The test was simply to wind the watch and take multiple timing and amplitude checks over 3 days across multiple positions. The watch was tested in 6 positions at full wind, after 24 hours, after 48 hours, and after 70 hours. The watch had an average daily rate of +3 seconds at each testing point with a total delta across all positions and 48 hours of just 9 seconds and a more incredible delta across all positions and 70 hours of 10 seconds. The average daily rate after 70 hours was +1 seconds per day. The average change in amplitude between full wind and after 70 hours was just 35 degrees. To add some perspective I tested an automatic watch from a similarly priced and well-respected luxury brand with a 52-hour power reserve and found that the average daily rate changed from +2 to +4 after 24 hours and to +8 after 48 hours with an average decrease in amplitude from full wind to 48 hours of 95 degrees. The results were very competitive for the first 24 hours but the Gravity Equal Force watch outperformed the traditional automatic movement as the watches continued to run.

The chart shows the result of the tests with the Armin Strom watch in blue and the standard modern automatic movement in green. Actual values are light-colored with a smooth curve overlaid in the darker color. You can see that with the standard automatic watch the amplitude starts dropping off sharply after about 30 hours and the rates consistently increase over the entire cycle of the watch. With the Gravity Equal Force mechanism, the Armin Strom watch maintains much more consistent amplitude and rates. Whether you just wound the watch or it has been sitting for 2 days you can count on the Armin Strom Gravity Equal Force watch to run with the same consistent accuracy whereas the other watch will need to be worn or consistently wound to deliver the same level of performance.

In a world where many “innovations” are made so that the marketing department has something to sell, this is a very practical development by Armin Strom that really does improve the functionality and usability of the watch. The Gravity Equal Force complication improves timekeeping without unnecessarily overcomplicating the mechanism. The way the watch starts running (and maintaining excellent timekeeping) with the slightest wind means that active individuals don’t need to worry about putting it on a winder when not wearing it, or even fully winding it before placing it on the wrist.