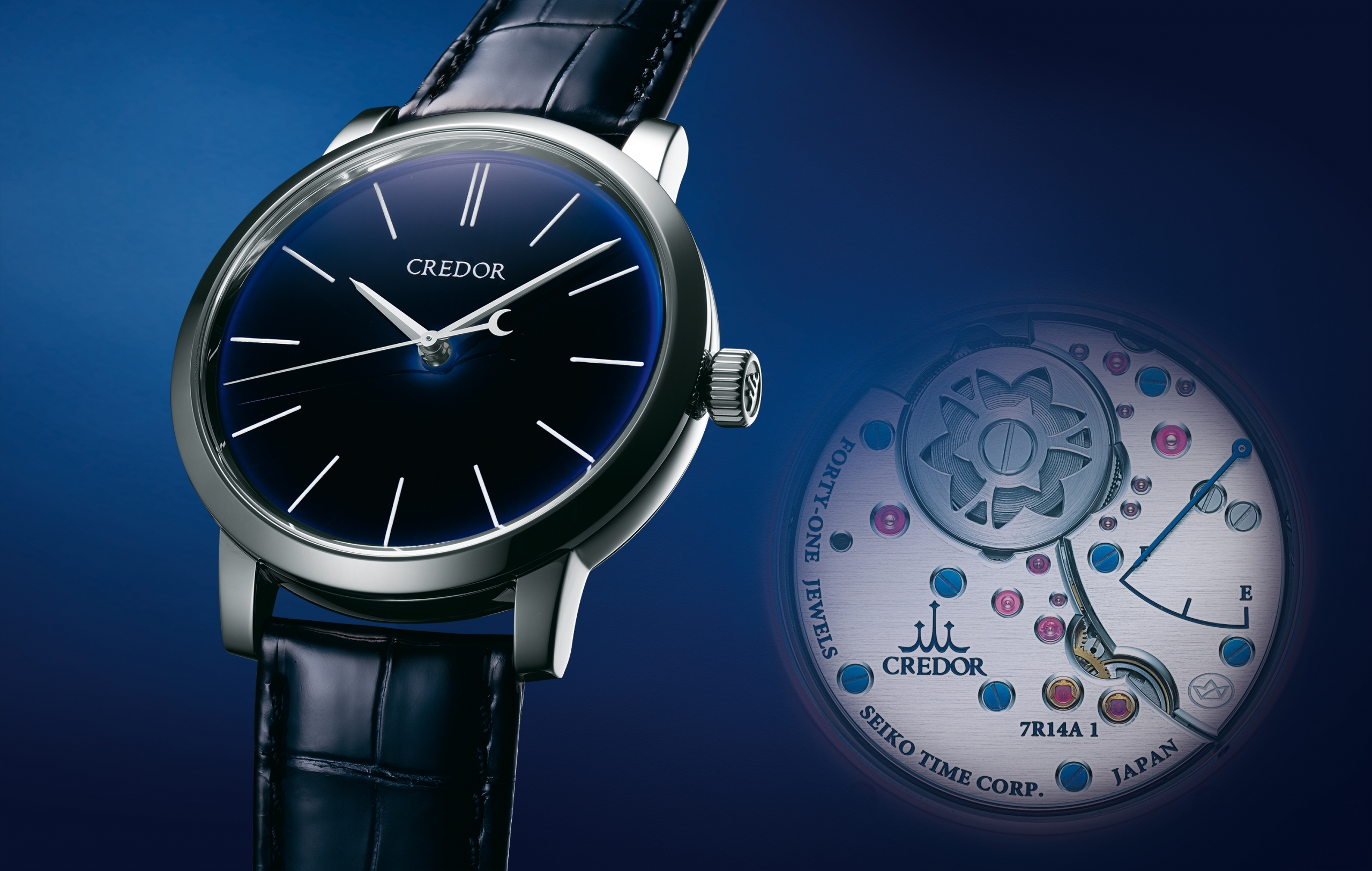 A new version of the Credor Eichi II has been created with a platinum case and a very special blue porcelain dial.

Credor is a luxury dress watch brand created in 1974 by its parent company Seiko and positioned at the ultra-high-end of the Japanese watchmaking giant — even above Grand Seiko. Each Credor is produced by master watchmakers, ensuring the highest quality. “Now in its 20th year, the Micro Artist Studio created not only Eichi (2008) and Eichi II (2014) but also many others including the Credor Spring Drive Sonnerie (2006) and the Credor Spring Drive Minute Repeater (2011),” according to Seiko.

To begin a year of celebration of the 140th anniversary of the establishment by Kintaro Hattori of the company known today as Seiko Watch Corporation, a new deep blue porcelain dial version of the Eichi II. The Credor Eichi II GBLT997 measures 39 mm x 10.3 mm, and is a basic time-only timepiece but with a level of detail that could be compared to a Patek Philippe Calatrava, and with a price tag that’s more than twice as much. Each Eichi II watch is manufactured, assembled, and finished by hand. And for this special variant, the indices and the “Credor” logo are hand-painted onto the Ruri blue porcelain dial by one of the studio’s in-house craftsmen — which as you can see from the rendering, produces a distinctive three-dimensional look, despite being completely flat.

“Known as Ruri in Japan and elsewhere as lapis lazuli, this deep blue color has entranced makers of jewelry and other objet d’art for centuries because of its intensity and its richness. It perfectly suits the simple, clean layout of the Eichi II dial and provides the ideal contrast to the white indexes and hands. It took over two years to develop this particular shade of Ruri blue and to achieve it requires each dial to be fired repeatedly.”

“The dial has a gentle curve thanks to the careful application of the porcelain glaze which creates a surface tension, giving it a slightly domed shape. The very nature of porcelain lends to the glaze being slightly thinner at the edge and center of the dial so that, as light plays across each dial, it reveals its own particular shades and tones.”

An incredibly ornate version of Seiko’s proprietary Spring Drive movement technology powers the hours, minutes, and center seconds. Most noticeably, the white lacquered seconds hand — with its unique crescent-shaped counterweight — sweeps the dial every 60-seconds with the utmost level of smoothness, thanks to the Spring Drive movement.

The manually wound Spring Drive caliber 7R14 movement is a higher-end version of the same proprietary technology used on Seiko and Grand Seiko timepieces bearing the “Spring Drive” name. Featuring 41 jewels, and 60-hour of power reserve, the movement is reminiscent of a highly adjusted Swiss caliber but even more accurate with a standard rate of -/+ 15 seconds per month.

Credor caliber 7R14 has a two-piece bridge for strength and stability but also to show off the hand craftsmanship of the company’s most skilled watchmakers. The edges of the bridges are perfectly handed beveled and then polished. The jewel sinks are hand polished to a mirror finish. Each screw is tempered to a blue color, by hand. Symbolism is apparent throughout the watch and the barrel has the shape of the bellflower represents the city of Shiojiri. Further, a  tempered blue hand, visible on the movement side, indicates the amount of power reserve remaining. Unique to the Spring Drive is a “Torque Return System” which uses excess energy to rewind the mainspring which increases the power reserve.