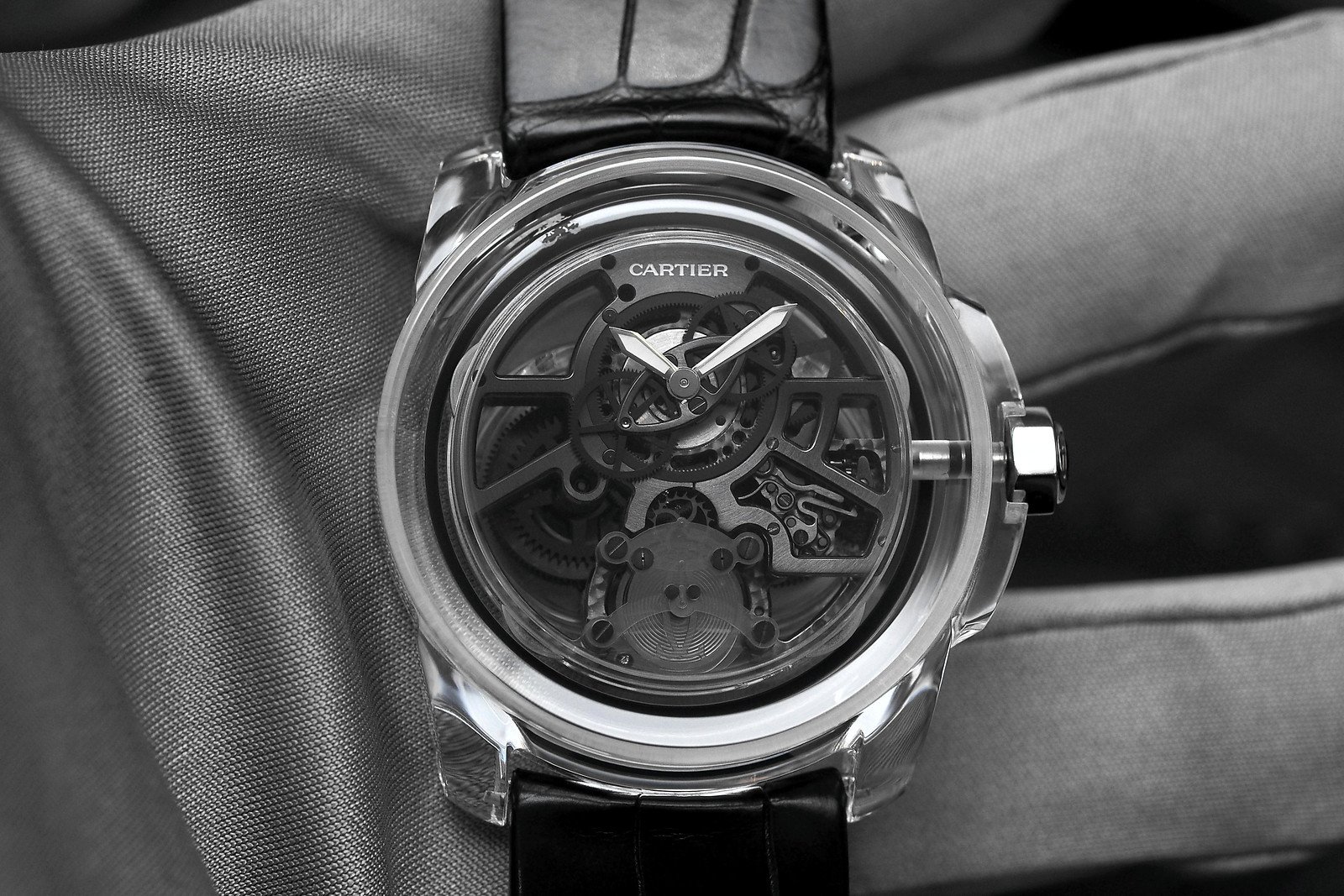 In 2009, Cartier introduced the ID One, the first adjustment-free watch — it is lubrication-free and insensitive to shocks, temperature, and magnetic fields. The Cartier ID Two builds on the original concept — and takes it to another level.

The “ID Two” concept is simple: by reducing energy waste inside the case, the efficiency of a watch can be greatly increased. While the idea is simple, implementing it into a functioning timepiece, is an entirely different story. Within Cartier’s independent think tank (the ID “Innovation and Development” team), the ID Two was developed over of period of 5 years. The resulting technologies are by far, some of the most advanced ever used in watchmaking.

According to Cartier, inside a watch case, 75% of its energy is wasted through various friction and from air resistance. “The case may be airtight but inside it, each moving part, however small, undergoes aerodynamic pressure which dampens its movement.” To reduce air resistance, automakers design sleek aerodynamic cars with low drag coefficients (Cx).

This improves efficiency by reducing the air drag and therefore the energy consumption needed to operate. Along those same lines, Cartier essentially decided to reduce the drag coefficient, within the watch case. By removing the air inside the case and by making sleeker and lighter components, with improved designs — they were able to produce a more efficient watch.

The Cartier ID Two consumes 2 times less energy than a typical modern timepiece. Apart from the performance advantages that were carried over from the ID One’s technology — regulation and lubrication-free operation and insensitivity to shock, temperature, and magnetic fields — the ID Two’s main performance advantage is its massive 32-day power reserve.

How specifically did Cartier achieve such a feat?
First off, to create an airtight case without the risk of leaks, the engineers had to design the case in just two parts, without any screws. The seals between the single case block (which makes up all of the case except for the back) and the back, as well as those surrounding the crown, have been made more airtight by the addition of nanoparticles. Inside the ceramic case, the movement beats inside in an absolute vacuum, with its beautiful state-of-the-art mechanics visible through the entirely transparent case.

Below are the six core technologies — which are the subject of 6 patent applications — that were used to make the Cartier ID Two concept a reality.

1- Vacuum case
To shield the oscillator from air resistance as it beats, the interior of the 42 mm Ceramyst transparent ceramic single-block case (front glass part of the case) is a vacuum. Caseback is attached without any screws. Airtightness is reinforced by using gaskets doped with nanoparticles.

2- Barrels with double fiberglass springs
For the first time in watchmaking history, the springs providing energy to the watch movement have been made not in metal, but in glass microfiber. Microfiber is far more flexible, and can, therefore, provide much greater energy, with less effort, giving a considerable increase in power.

3- DRIE technology
DRIE technology (Deep Reactive Ion Etching) allows micromechanical components to be made with extreme precision (1 micron or 1/1000th of millimeter tolerance can be achieved for some movement components) and this process works particularly well with carbon crystal.

5- ID Escapement
Cartier ID Two reuses the solution explored in Cartier ID One: components made using DRIE technologies, oscillator and escapement bearing in carbon crystal, and pivot axes in black ADLC- coated titanium. This greatly reduces energy consumption, which in turn significantly increases energy efficiency (especially because these are the components of a watch that require the most energy.)

By combining the innovations from the ID One, with the new innovations developed for the ID Two, Cartier has created a futuristic super timepiece. Last week, I spoke with the CEO of Cartier North America, Emmanuel Perrin, and he expressed Cartier’s intentions for the ID Two. Perrin said, the ID Two both gives Cartier serious credibility as a watch manufacture, as well as providing the brand a platform to develop and test cutting-edge watchmaking technologies that can be implemented into production timepieces — now — and in the future.

This is a concept watch and is not available for sale.