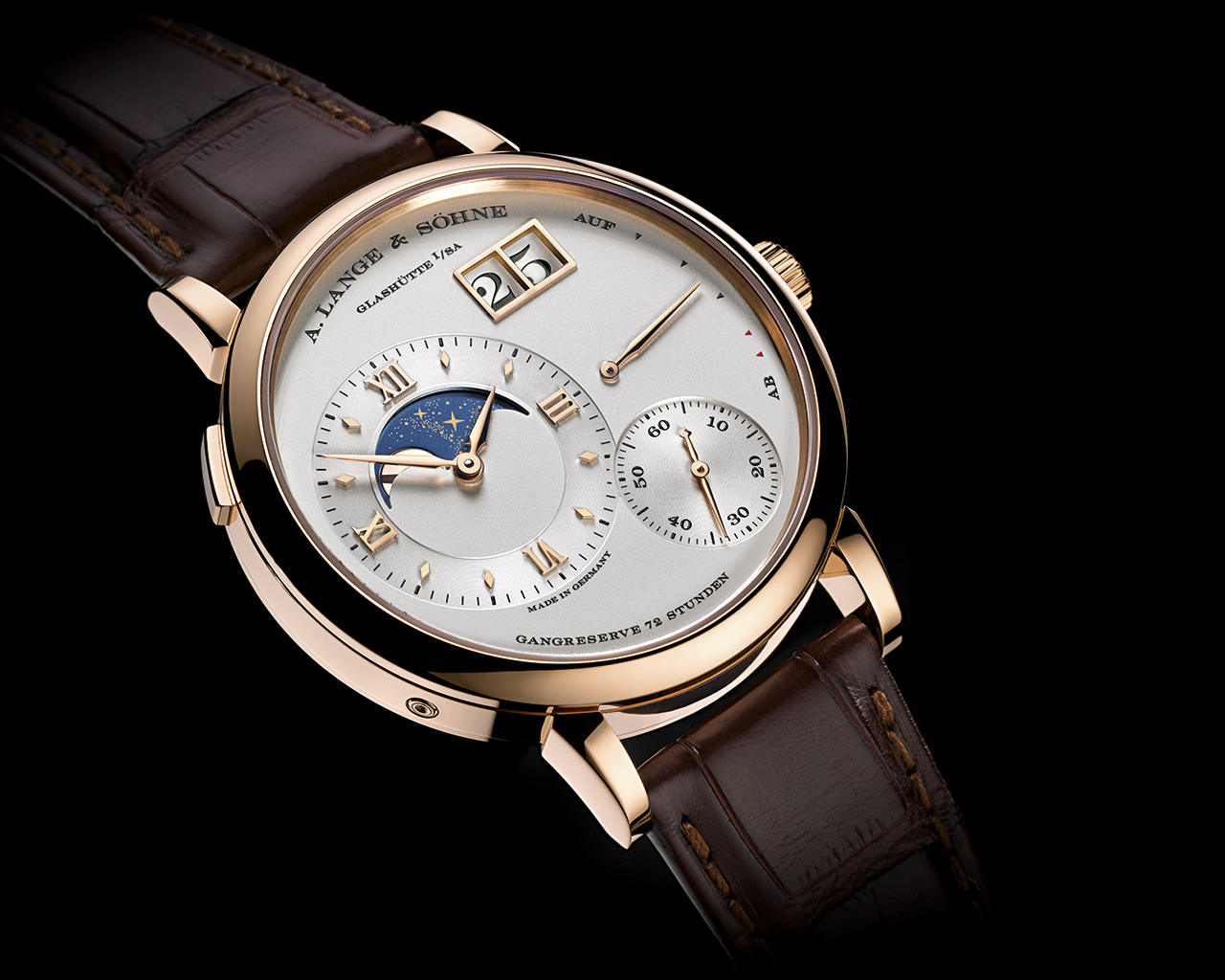 The new Grand Lange 1 Moon Phase from A. Lange & Söhne in yellow gold, pink gold, or platinum — helps track the lunar cycle in style. The solid-gold lunar disc of the watch depicts the moon, not only one of the most discussed and popular celestial bodies, but also a powerful planet that influences the rhythms of numerous flora and fauna on earth.

The distinctive prominence of this lunar disc on the dial coupled with the patented coating process breathes life into it. Furthermore, the dial of the moon phase display depicts the nocturnal sky as magnificently as possible, with a miniaturized image of the galaxy comprising more than 300 stars of different sizes with extremely sharp contours that have been laser cut.

Lange, a Saxony based manufactory has released 12 models along the same lines, but this is the only watch that showcases the moon phase so distinctly and prominently. It is all the little details that will likely make the new Grand Lange 1 Moon Phase one of the most sought after watches of its kind amongst serious watch collectors.

Only one mainspring barrel is responsible for the considerable 72-hour power reserve of this sleek 4.7 millimeter high movement. Cased up, the total thickness of the watch is 9.5 mm, with a diameter of 41 mm.

The off-center dial with a moon phase display is designed to remain accurate for 122.6 years. In addition, time lapses between new moons are indicated by the display with an accuracy of 99.9978%, thanks to the seven-gear transmission of the Grand Lange 1 Moon Phase. Lange’s press release reads. “The average synodic month lasts 29 days, 12 hours, 44 minutes, and 3 seconds.

For the sake of simplicity, most classic moon-phase displays round this cycle down to 29.5 days. The resulting deviation of 44 minutes and 3 seconds per lunation adds up to one day in merely two and a half years. The much more precisely calculated seven-gear transmission of the GRAND LANGE 1 MOON PHASE reduces the deviation per cycle to less than one minute.”

The easily recognizable and popular astronomical indication – offers clear-cut proof of how the actual orbit of the moon is tracked. The hour-wheel continuum that the display is connected to makes this possible. Akin to the moon, the wheel is constantly in motion, however the increments are so small that they’re virtually microscopic.

Powering the Grand Lange 1 Moon Phase is manufacture caliber L095.3, a manually wound movement, decorated and assembled by hand, precision adjusted in five positions, with plates and bridges made of untreated German silver and a balance cock engraved by hand. There are a total of 446 components, 45 of which are jewels and 7 of which are screwed gold chatons. It runs at 3Hz and features a precision beat adjustment system with a lateral setscrew and whiplash spring. Functions include: hours, minutes, subsidiary seconds with stop seconds, power reserve indicator, outsize date and moon-phase display.