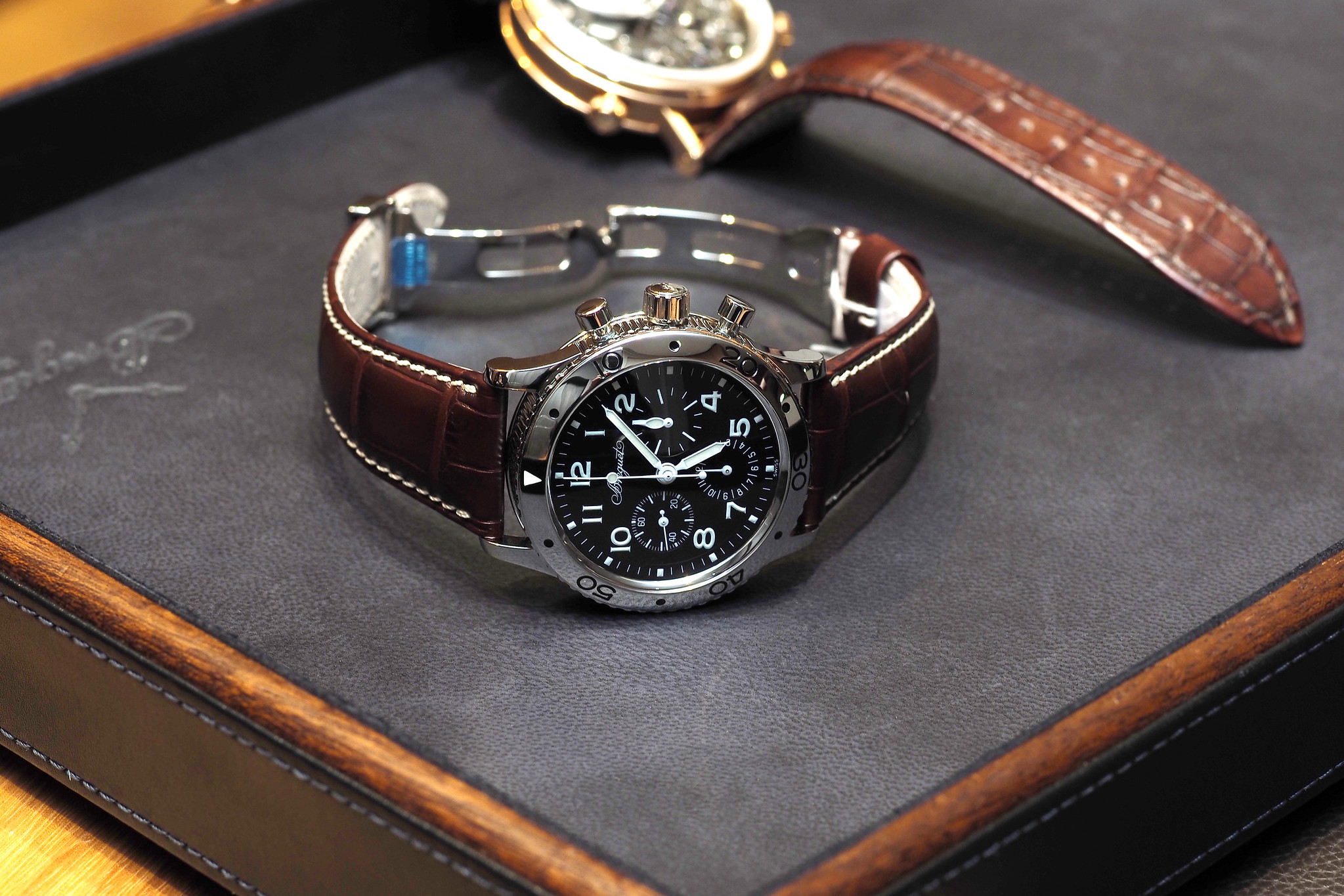 The History of the Breguet Type XX

Wristwatches have a rich history in aviation, and by the time World War II started (1939), soldiers and aviators used wristwatches – more than pocket watches – to calculate everything from flight time to artillery distances to longitude to troop movements.

In (1941), Lange & Sohne, who was the primary supplier of wristwatches to German combat pilots, could not deliver enough watches to fill the demand. So, the German government demanded five manufacturers to build B-uhr (“Beobachtungs-uhr” or “Pilot”) watches which were anti-magnetic, highly legible, and able to be chronometer certified. The five companies that produced the original pilot watches are IWC, Lange & Söhne, Laco, Wempe, and Stowa.

Over a decade later, Breitling launched the Navitimer in (1952), with the now-famous slide rule bezel designed for pilots to make crucial in air navigational calculations.

By (1954), at a time when long-haul transatlantic flights were becoming more prevalent, Rolex launched the GMT Master designed in collaboration with Pan AM Airways. The key feature of the watch was that the wearer could easily track different time zones simultaneously.

Breguet developed its first prototype chronograph Type 20 wristwatches in the 1950s. And in (1958) the French Aéronavale, which was the naval air arm of the French Navy, commissioned Breguet to create a series of 500 numbered pieces, all with “BREGUET MARINE NATIONALE AERONAUTIQUE NAVALE” engraved on the solid caseback. Five other watchmakers were also commissioned to create Type 20 and Type 21 watches for use by French Navy pilots.

The five other brands were Mathey Tissot, Airain, Vixa, Auricoste, and Dodane (Auricoste and Dodane are the only two of these companies still in business).

The Type 20 watches, similar to the aforementioned B-Uhr pilots’ watches commissioned by the German military, needed to meet some basic prerequisites, including a having a 38 mm diameter stainless steel case, a chronograph with “flyback” function, a rotating bezel engraved with a 12-hour scale, a power reserve of 35-hours or more, luminescent material on the hands and dial, and an accuracy of 8 seconds +/- per day.

As mentioned above, Breguet is one of three brands out of six that is still in operation that was originally designated to create Type 20 and 21 chronographs.

Breguet still produces the modern, third-generation “Type XX” that pays homage to the vintage “Type 20.” Breguet also currently makes the Type XXI and Type XXII chronographs, which in contrast to the retro styling of the Type XX, has a contemporary design.

The third-generation Type XX, known as the Breguet Type XX Aéronavale Chronograph (ref. 3800ST/92/9W6) was launched in 1995 and is still sold today. It is powered by automatic caliber 582, based on Lemania caliber 1350, with a flyback module added on top. The movement beats at a modern rate of 4Hz and has a 48-hour power reserve.

(Editor’s note: Breguet owns all Lemania intellectual property and is headquartered in the original Lemania manufacture located in the heart of the famous Vallée de Joux watchmaking region.)

Compared to the Lemania caliber 1350, the components are decorated to a higher standard, with embellishments such as Geneva stripes on the rotor, circular graining on the mainplate, and straight-grained bridges and levers. While the finish is not comparable to what you would expect from an haute horology Breguet movement, there is none of the signature Breguet hand guilloché-work, which is found on every other Breguet collection, for example. Moreover, the chronograph is actuated using a cam and lever configuration, as opposed to a more premium column wheel and vertical clutch system.

The Type XX is not strictly a professional watch, per se, but it has a 39 mm stainless steel case, a solid caseback, a flyback function, luminescent hands, and luminescent printed numerals, like the original (although the bezel has a 0-60 scale instead of a 12-hour scale, and the case is 1 mm larger).

For reference, below is a selection of superb Type 20 timepieces, as well as a Type 11/1 aviation pocket watch, and a Breguet airplane gauge, that we shot in December 2016 at the permanent exhibit at the Breguet Museum, housed in the upper level at the Breguet Boutique at 6 Place Vendôme, Paris. There are of course numerous other Breguet treasures inside the museum which it is also worth noting is curated by Emmanuel Breguet, a seventh-generation direct descendant of Abraham-Louis Breguet.

In 1999, the Swatch Group bought Breguet, which included the Lemania manufacture – and has significantly modernized the factory since that time – yet surprisingly, the movement powering the Type XX has remained the same for more than two decades.

Which brings me to my concluding thoughts.

The current third-generation Type XX is a great watch that meets almost all of the original Type 20 specifications and is accessibly priced at $9500, considering the brand name.

However, I would genuinely love to see Breguet make a fourth-generation Type XX in a similar steel case, although preferably a bit thinner, fitted with a modern Breguet chronograph movement such as caliber 589F that beats at an incredibly high rate of 10Hz (72,000 vph), has a second time zone, and is currently used in the Type XXII. Or even just an updated Lemania caliber would probably do the trick.

The key element to a homage piece like this is to preserve what makes the older model look so good aesthetically. And in this case, I love the second generation Type 20s (two are shown above) with black rotating bezels – one with a bi-compax and the other tri-compax layout – which are the most attractive of the Type 20s, in my opinion. Make a re-edition of one of these and that would be perfection in my mind.