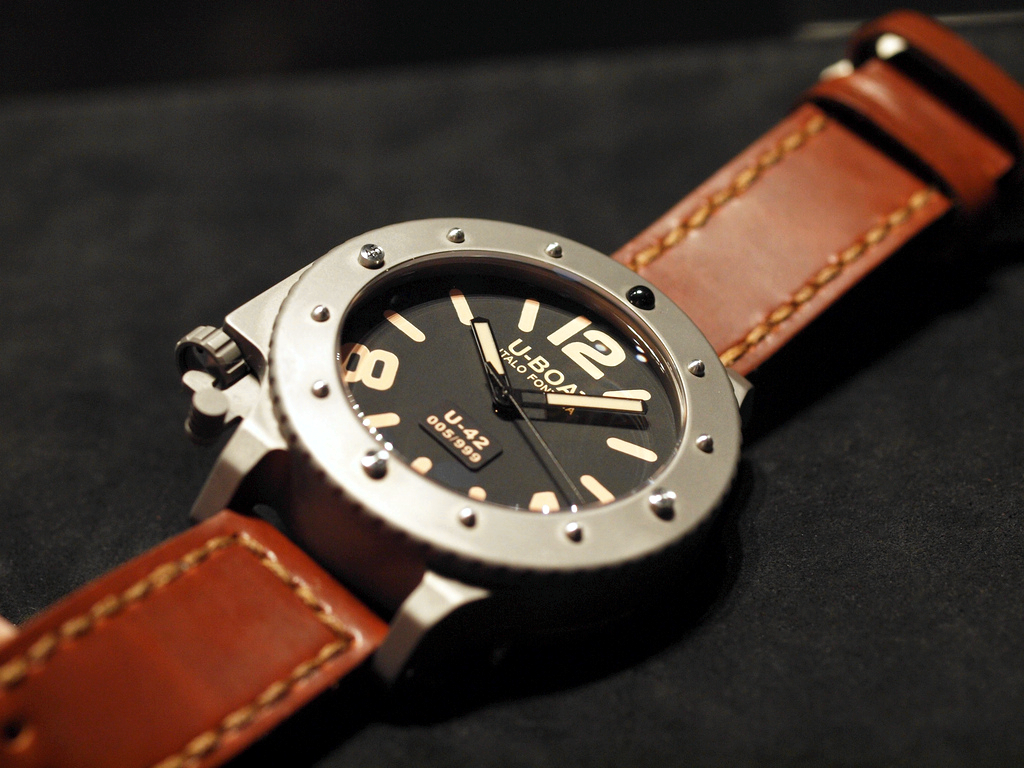 U-Boat watches are professional instruments and in a meeting with Italo Fontana, founder and designer of U-Boat watch, I learned that much of his inspiration comes from machines like racing cars, or jet fighters and the instrumentation found inside them.

The successful Flightdeck collection and the lesser-known Thousands of Feet series are examples of U-Boat watches that spawned from this passion. A second important source of inspiration for Italo’s watchmaking career is a concept that his grandfather had proposed to the Italian Navy in 1942. The numerals and left-handed configuration of U-Boat watches spurred from these drawings and were originally revived in 2009 by the giant, 65mm, U-1942. The limited-edition U-42, unveiled in March 2010, is based on the U-1942 but scaled down to a 53mm size and to a more accessible price range.

Italo Fontana’s grandfather, Ilvo Fontana, submitted his watch idea to the Italian Navy at the same time that Panerai was producing their pieces for the Marina Militare. While not associated in any way with the Panerai family business, Mr. Fontana’s watch was based on the same principles of high legibility, water resistance, and reliability.

A few notable differences occurred, where the most obvious was an intricate crown system on the left of the case. The left-handed configuration, which achieves a more comfortable fit on the wrist as well as better protection for the crown, has become one of the signature characteristics of Italo Fontana’s U-Boat watches.

Italo’s U-42, like his grandfather’s concept, had to be, is highly water-resistant. Its structural specifications read exactly like a professional-grade diving watch. Each watch is tested at the manufacturing stage to ensure that it can withstand 40bars of pressure, which reaches beyond the official rating of 300 meters. The numerals are large and bold and coated with a healthy dose of phosphorescent paint in order to be clearly legible underwater.

The bezel rotates freely in both directions when released by way of a lever, the type of functional and peculiar feature that many watch enthusiasts look for. The lever is tucked into the right side of the case. When this lever is pulled the bezel is unhinged and the user is able to set it. Like most, if not all luxury dive-inspired watches the U-42 is obsolete for use in real-life, deep-water dives. Lacking photo-luminescent markings on the rotating bezel is the U-42’s specific shortcoming. It can, however, serve a purpose in shallow dives where a dive computer is superfluous and light is still available to see the markings on the bezel.

The case of the U-42 is 53mm in diameter. This is equal to the size of the popular U-Boat Classico models. The U-42 is 3 mm thicker and things like the bezel are beefier, giving the impression that it is larger. Grade 5 natural titanium is used for the manufacturing of the case, which in my opinion is indispensable to large watches. Titanium is light and tough. It is always surprising to adorn such oversize models as the U-42 and feel a very comfortable weight. Large watches are easy to be hit against things like door frames and tables, so titanium’s toughness offers an advantage over steel or ceramic. It scratches roughly as easily as steel, but it is difficult to put big dents on it and as good as impossible to chip, as can happen, albeit rarely, with ceramic.

On the left of the U-42 is the very specialized crown system. The philosophy behind the large, protruding crown is the ease of use in all conditions. Even with thick gloves, one can release it from its resting position and get a hold of it. To release the crown, a trigger-like piece is placed at seven o’clock. Once unfolded, the crown protrudes considerably and can be pulled out like any other crown with positions for winding and setting. Once returned to its folded position, the whole crown system plays into the rugged style of the case.

Because it is inspired by a design from 1942, it is natural that the U-42 offers a vintage-like look. The dial plays an important role in achieving this style. The hour markers are bold and display a beige hue that recalls the spent, and discolored white luminescent paint on old watches. The beige paint on the U-42 is phosphorescent and is also applied to the hands. These thick, baton hands are made of sterling silver. The strap is cut and stitched by hand using thick, brown leather and beige thread. It is manufactured in the same way as traditional leather goods. The grain of the leather is left untouched on the underside of the band and is only marked by the U-Boat logo that is burnt into it.

The U-42 is an automatic-winding watch. It runs on “Meccanica Svizera” or Swiss mechanics. The movement that the watch runs on is dubbed the U-28 caliber. It is the first movement to be given a U-Boat caliber denomination. It offers a 40-hour power reserve. Undoubtedly it is provided by one of the major manufacturers of high-grade movements in Switzerland, probably ETA or Sellita, and is reconfigured to accommodate the left-handed crown configuration and the added torque provided by the huge crown.

999 or less of each variation of the U-42 will be manufactured. Several models are projected, including versions clad with gold elements, but thus far only the black dial with beige numbers is confirmed for release in the near future. As mentioned before the U-42 fits in a more accessible price range than its big brother, the U-1942, of which only 28 were manufactured and offered at US $40K. The U-42 will be available in the US and Canada for under $7K in either currency.

The scope of Nonno Ilvo Fontana’s 1942 design was to build a strong, impermeable, and highly legible timepiece for specialized navy commandos. This is what is captured in the U-42. The difference is that, rather than for Italian Frogmen, it is destined for the wrists of watch enthusiasts with a sweet tooth for size. The 53mm, titanium case is rigorously engineered and true to military design principles of the forties. Originally the design offered unparalleled visibility in dark waters, and now a remarkable and unique look.