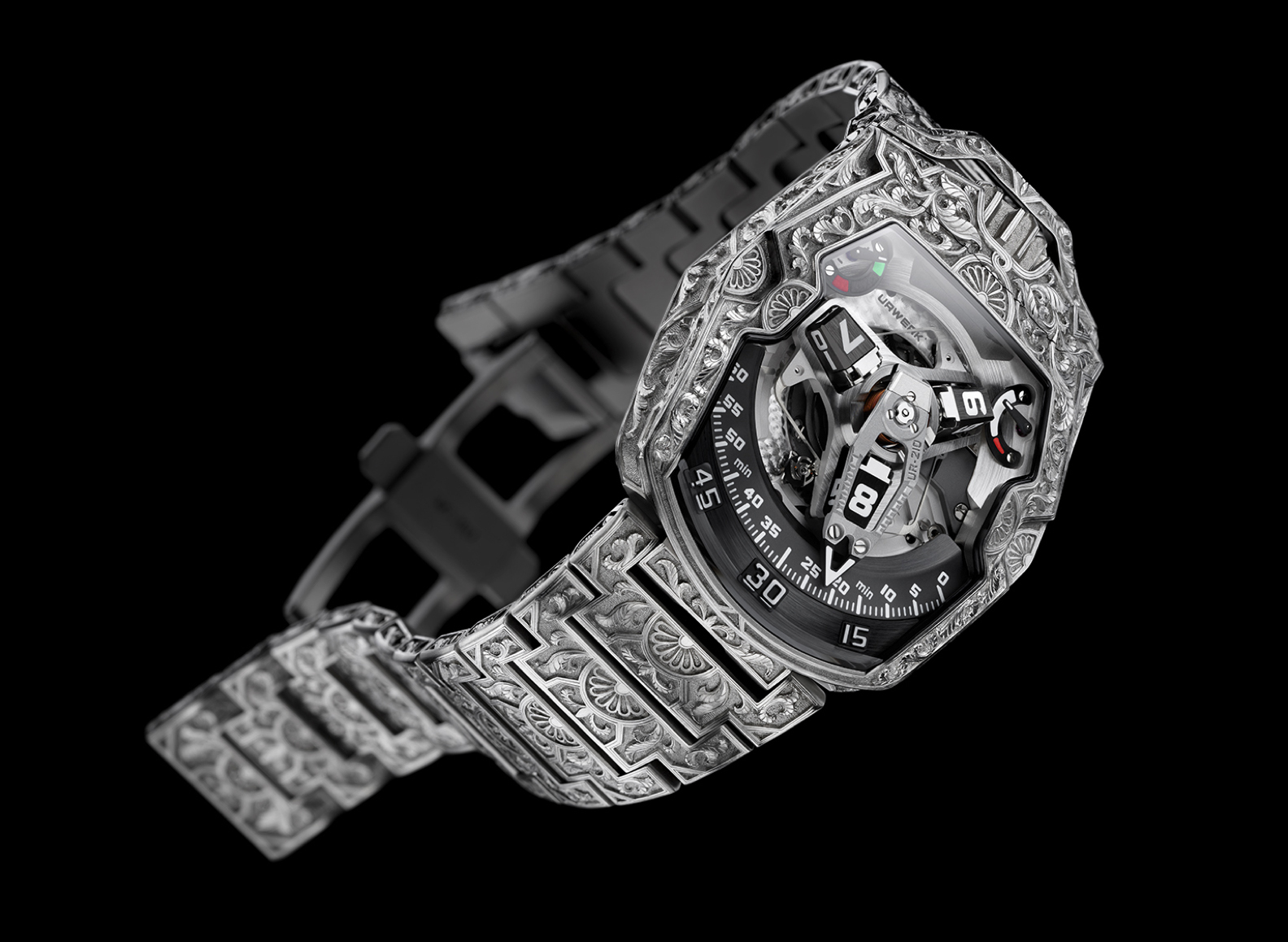 The UR-210 Dubai is a unique watch engraved by the expert hands of Florian Güllert. The artwork will be unveiled at the now established Dubai Watch Week hosted by Ahmed Seddiqi & sons, retailers. This one-of-a-kind UR-210 is themed on the spellbinding superlatives of Dubai, the maddening, yet tantalizing megacity. For all its wealth and display, Dubai is also rich in sophisticated traditions. The cocktail of emotions stirred by the first experience of this breath-taking city is engraved forever in the metal of this timepiece.

“I landed Dubai for the first time in 2007 after a seven hour flight from Geneva. The first shocking impression as you step out of the plane is the wave of heat than engulfs you — a hot dry breath that tells you immediately that you’re in a different latitude,” recalls watchmaker Felix Baumgartner, co-founder of Urwerk. “Then a welcome that you experience nowhere else. You dive into an extraordinary city of skyscrapers, highways and huge cars — extravagance as far as the eye can see. Dubai is a city that is in a perpetual process of transformation. Like New York in the eighties, it’s the city that never sleeps. After several hectic days, sudden calm and silence —my first encounter with the desert. Endless sand and a complete absence of sound in a world apart from the urban frenzy. I’ve tried to translate these strong and often contradictory sensations in the UR-210 Dubai — a watch dedicated to this exceptional city. It’s one of our most stunning creations, a state-of-the-art machine with the human touch of Florian Güllert’s hands. Carving arabesques and scrolls took almost 300 hours. “I immersed myself in art books on engraving and Middle Eastern decorative styles before embarking on this daunting project. But what joy!” declares Florian Güllert. “I’m used to the classic motifs you see on sporting guns, so I had to reappraise my working methods,” he admits.

On the watchmaking side, the satellite indication with retrograde minutes is both original and astonishing. The prominent role is played by the three-dimensional minutes indicator — a high-tech structure that grips the hours cube and transports it from 0 to the 60th minute on the scale. This hourly journey through time takes place with smooth regularity along an arc of 120°, but at the end of the 59th minute, the UR-210 shows what it is capable of. With a sharp click, the structure jumps back to its starting point in less than a tenth of a second to take control of the next hours satellite.

1- A central shaft ensures the system’s stability. Pivoting on rubies, it is the rock on which the entire complication is constructed. A marine-chronometer spring along this axis provides the tension for the retrograde action.

2- The unconventional minutes hand, that acts like a kind of fairing around the satellite, frames the outsize hours numerals. It has been very precisely cut to tolerances of three microns. Forged out of aluminum, its total weight of 0.302 grams is perfectly poised by a brass counterbalance.

3- A double coaxial star cam governs the retrograde action. Its gearing and then its rotation will determine the trajectory of the minutes hand.

The dial of the UR-210 displays a conventional power-reserve indicator at 1 o’clock. On the opposite side at 11 o’clock is the first-ever indication of the winding performance of the watch during the past two hours on your wrist. Instead of showing the torque or the tension in the mainspring, it shows the winding efficiency by calculating the ratio between the energy generated to wind the watch and the energy used to keep it going.

Knowing the winding efficiency of your watch enables you to adjust the winding rate. If your UR-210 shows that not enough energy is being generated, you can turn the winding rate adjuster on the back of the watch to FULL. The winding rotor then becomes sensitive to the slightest motion, converting it into pure energy. The rotor is connected to a turbine that ensures an optimum winding rate while dampening shocks. If your activity creates too much energy, turning the adjusting wheel to REDUCED absorbs some of that energy to prevent unnecessary stress on the mechanism. A turbine mounted on ruby bearings starts to spin, acting as an air compressor and creating a resistance that slows down the winding rotor. In the STOP position, the self-winding system is disengaged and the UR-210 becomes a manually wound watch.