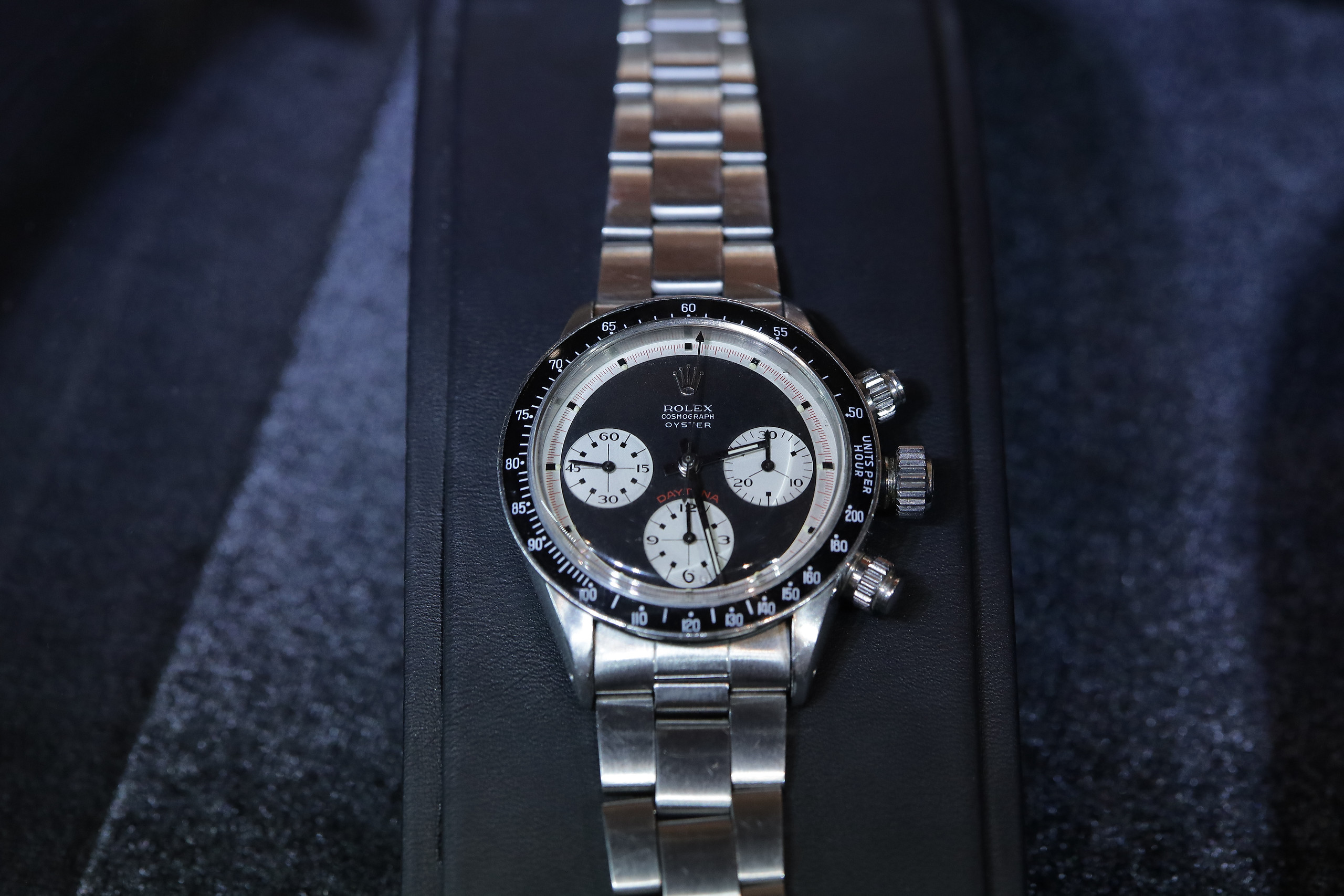 During a recent visit to Phillips New York, I previewed the timepieces from the upcoming Geneva Watch Auction X, that takes place on November 9th and 10th.

For this field report, I chose four lots: two Rolexes, one Audemars Piguet, and a Zenith to highlight. Not to say that these watches are the marquee watches of the auction, as there are so many collectible timepiece lots (184 in total) to choose from. However, it’s worth noting that the rare oversized Rolex Ref. 4113, with a presale estimate at over a million dollars, is expected to bring in the most at the auction.

First, is a 5402ST A-Series Royal Oak, which is the original 39 mm stainless steel Royal Oak, designed by Gerald Genta. Today, the modern 15202ST, like the original, is also highly coveted, along with the 5711 from Patek Philippe. All the early and modern references of these Genta-designed legends are commanding insanely high prices currently. Needless to say, this category of steel wristwatches with integrated bracelets, which Audemars Piguet pioneered, is on fire, both new and pre-owned. (Estimate is $40,300-80,600.)

Second, is a Zenith El Primero Ref. A386 from 1969, one of the earliest El Primero references, not to mention one of the earliest automatic chronographs ever made. Three automatic chronograph movements came out in 1969, one from Seiko (caliber 6139), one from Zenith (caliber 3019 PHC), and one from a consortium made up of Breitling, Dubois-Depraz, Hamilton-Buren, and Heuer (caliber 11). The Zenith was announced first but the other two aforementioned movements actually made it to market first. That same year, Zenith introduced the A384, A385, and A386 watches, all with the caliber 3019 PHC inside. So this example is from the original debut year but is a later reference.

Unlike the A384, which Zenith remade this year in conjunction with the 50th Anniversary of the El Primero, the A386 has the typical case style you see on modern El Primeros. The vintage case is 37.5 mm, which is not as large as the modern references of El Primero but is still large enough to look good on a variety of wrists. And the dial features the multi-colored layout that the Zenith El Primero is known for.

Phillips states that this watch came from the family of the original owner and believes the watch has never been polished. (Estimate is $5,000-8,100.)

Third, is the Rolex Ref. 4113, an “oversized” split-seconds chronograph from 1942. The importance of this watch is underscored by the fact that it was the first watch to break the one million dollar barrier at auction. According to Phillips, it was literally this exact reference 4113 (case number 051’318) that sold for (CHF 1,035,000) in 2011.

Additionally, it looks like nothing Rolex has ever produced, and only twelve examples of reference 4113 were ever thought to be made, all in stainless steel, represented by case numbers that range from 051’313 to 051’324.

Furthermore, this is the only split-seconds chronograph Rolex has ever made, and at 44 mm in diameter, it’s the largest diameter watch created by Rolex. Although, it’s worth noting that Rolex does have a few 44 mm diameter cases in their current catalog as well, such as the Deepsea and Yachtmaster II. (Estimate in excess of $1.5 million.)

Purchased at a retailer in Canada in 1974, this 37.5 mm stainless steel watch has remained with the original owner ever since, according to Phillips. Referred to as the “Paul Newman Oyster Sotto” this reference 6263 is a rare variation of Rolex’s famous chronograph that Phillips says “less than two dozen are known overall.” The reference was made during the last leg of the production of the Paul Newman dial.

Phillips says that this variation was possibly one of a number of Paul Newman dials made for non-Oyster (without screw-down pushers) models that were repurposed to be fitted in (water-resistant) Oyster cases. This is why the word Oyster was added under – “sotto” in Italian – the “Rolex Cosmograph” print and these dials read “Rolex Cosmograph Oyster” rather than the usual “Rolex Oyster Cosmograph.”

This Oyster Sotto Paul Newman is a very rare MK 1 version, and is highly coveted, even within the already incredibly collectible Paul Newman Daytona family. (Estimate is $351,000 to $702,000.)