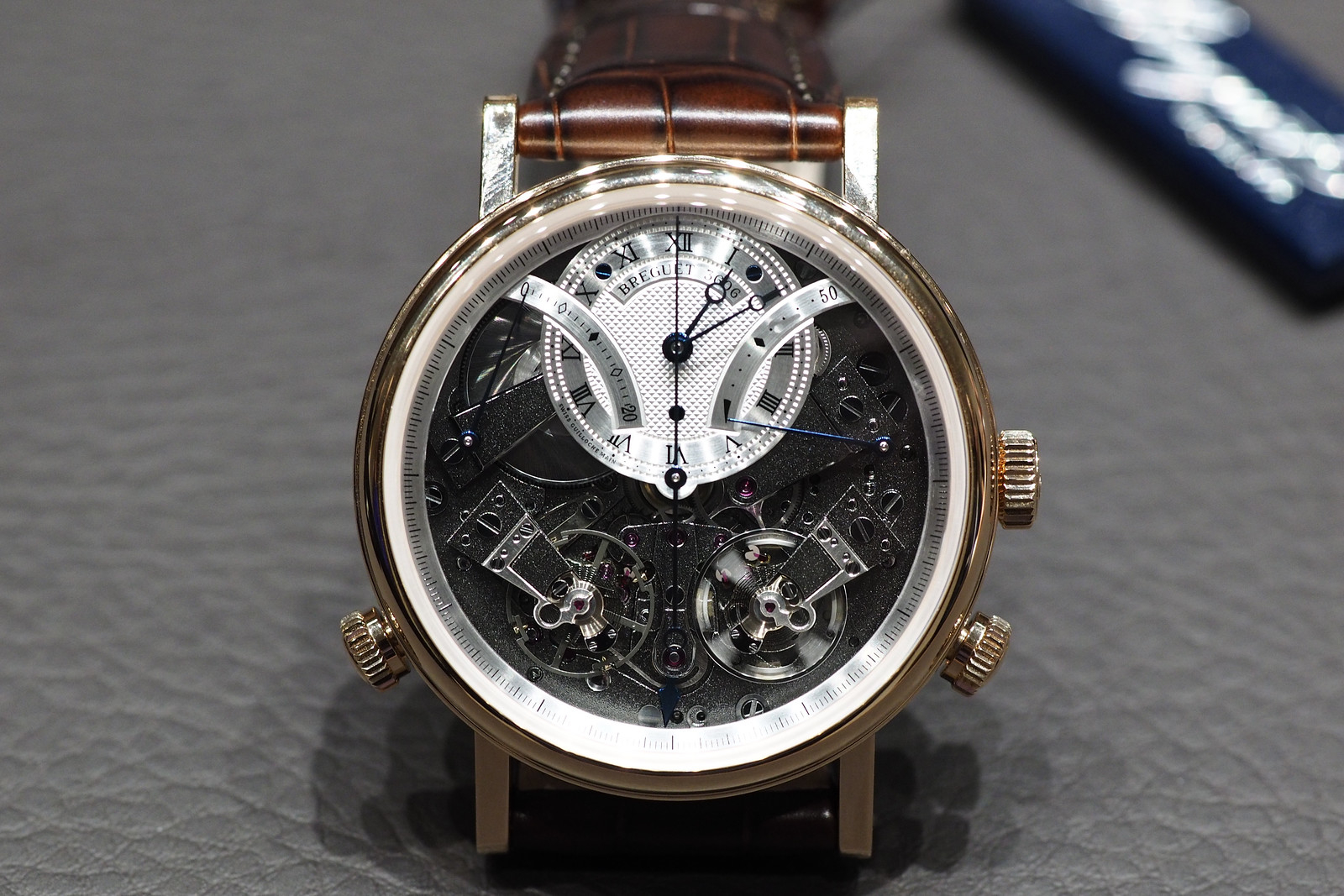 Breguet recently debuted an incredibly cool new chronograph that will likely appeal to chronograph lovers, as well as those of you who appreciate highly technical timepieces.

The Tradition Chronograph Independent 7077 was introduced at Baselworld last month and represents a mixture of modern and historical horology, resulting in something truly innovative. Utilizing specifications and know-how from Breguet historical reference 4009, the watchmakers in L’Abbaye developed a modern chronograph using two separate gear trains to improve the timekeeping (chronometry), specifically when the chronograph is being used.

Each gear train has its own balance wheel, spring and escapement. And each is visible on the dial side of the watch (a hallmark of the Tradition line) that we love. The chronograph balance assembly is on the lower left and the timekeeping balance is on the lower right. Notably, the chronograph regulator beats at 5Hz and the timekeeping regulator beats at 3Hz.

Why is the frequency for the chronograph higher than the movement? Breguet has found that in the context of chronographs, higher frequencies (such as 5Hz) improve the stability of the rate since any disturbances are corrected more quickly.

Normally, adding a second gear train requires a second mainspring barrel to power it. An extra barrel, of course, takes up more space. Not to mention, the wearer must wind up both the chronograph barrel spring as well as the going barrel, just like on the Jaeger-LeCoultre Duometere.

Instead, Breguet took a slightly different approach and developed a new type of spring (based on the historical reference 4009 – pictured) that generates the energy required to drive the chronograph from the user simply operating the reset-to-zero function, eliminating the need for a second mainspring barrel. Once the reset button (on the left side of the case) is pressed, the special flexed blade spring is flexed, and thereby armed. Historically, this type of spring was good for only 20-minutes, and this is exactly how long the chronograph counter goes for.

According to Breguet, “The application of the blade spring principle by Breguet’s watchmakers has given rise to a number of innovations. A non-concentric going train has been associated with the blade spring so as to even out the torque and achieve constant amplitude and rate of the chronograph. A patent has been filed for the entire spring and train assembly. Instead of following its usual curve, the shape of the train has been calculated to transmit constant force to the chronograph.

In addition, the reference 7077 is fitted with a patented chronograph balance wheel in titanium ensuring perfect symmetry with the movement balance wheel. The use of a heavier material for the balance wheel would have meant making it smaller. The overall appearance would be affected, especially since one of the features of the Tradition collection is to make the main parts of the movement visible on the baseplate. The two balance-wheels are thus the same size, despite their different frequencies, and their position is in tune with aesthetic considerations.”

Contrary to the typical configuration on a chronograph – that uses one button for start and stop and one for reset – this watch has one pusher to control the start of the chronograph, and the other pusher controls stop and reset to zero. The chronograph is controlled by two screwed pushers. “Start” is on the right at 4 o’clock and “Stop/Reset” is on the left at 8 o’clock.

The Tradition Chronograph Independent 7077 comes in a 44 mm case, in white gold (Ref. 7077BB/G1/9XV) or rose gold (Ref. 7077BR/G1/9XV). The caseband is finely fluted and has welded lugs with screwed bars. The water-resistance rating is 30 meters.

Prominently displayed at twelve o’clock is the main dial with hours and minutes on a silvered 18K gold background with intricate engine-turned guilloche-work. The chapter ring has a brushed silver finish and printed Roman numeral hour markers, along with blued steel open-tipped Breguet hands. On the left, is a silvered, retrograde display the indicates elapsed minutes from 0-20. On the right, is a retrograde power reserve display indicating up to 50-hours. There is also a chronograph running indicator at 6 o’clock.

In-house-made hand-wound caliber 580DR has 62 jewels and a symmetrical inverted in-line lever escapement with silicon pallets. Bridges and mainplate are decorated with a dark grey frosted finish. Breguet balance wheels and Breguet silicon springs. Both oscillators are adjusted in six positions. Bridges are decorated with a darkened frosted finish.

Breguet has always done an excellent job with the Tradition collection in general. Aside from the chronograph counter being limited to 20-minutes, which is a very small amount of time for a chrono, there’s a lot to like about reference 7077. It is definitely a welcome addition to the Tradition line – with its signature dial side movement, sophisticated chronograph design, and standout finishing. 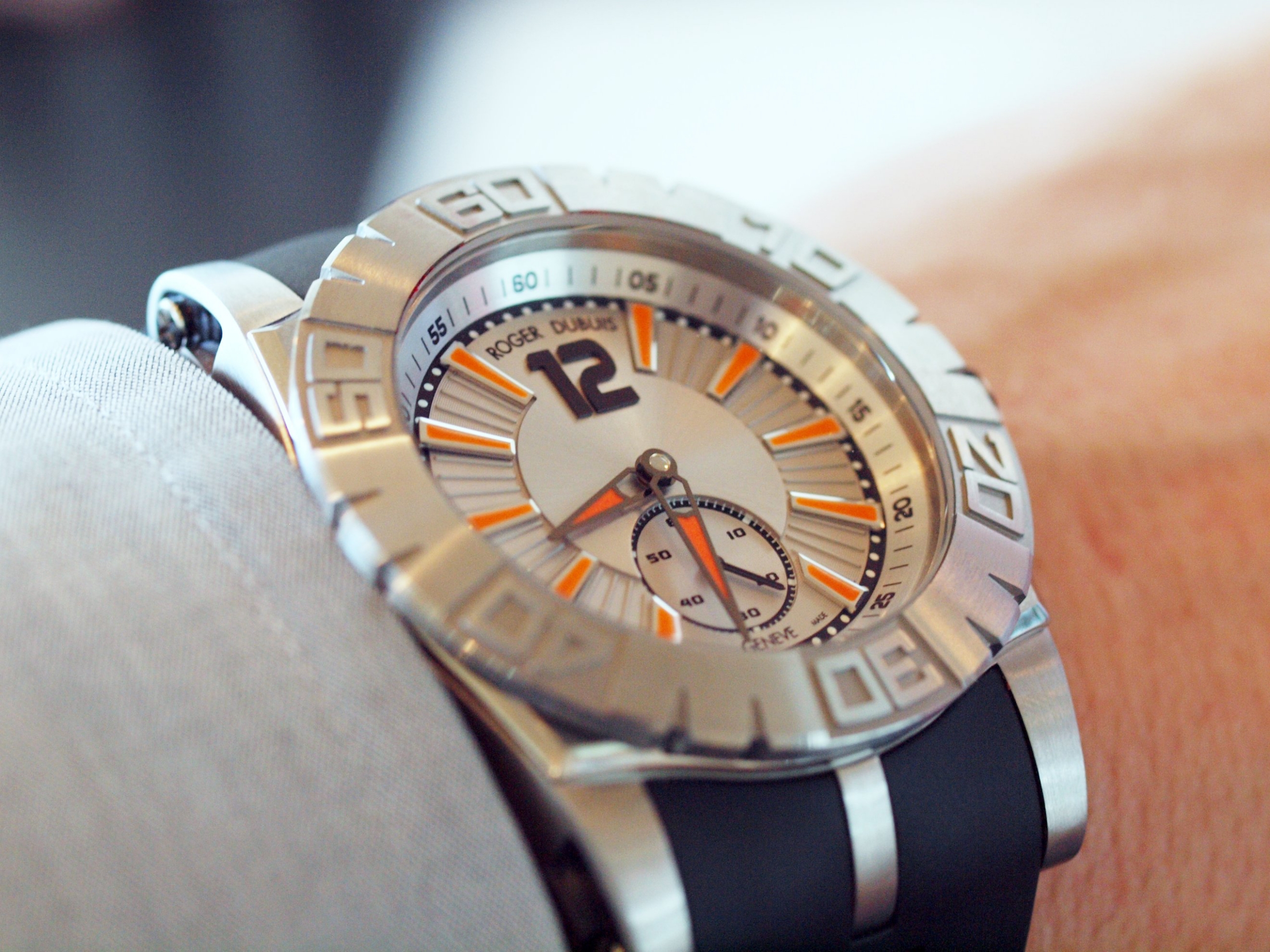