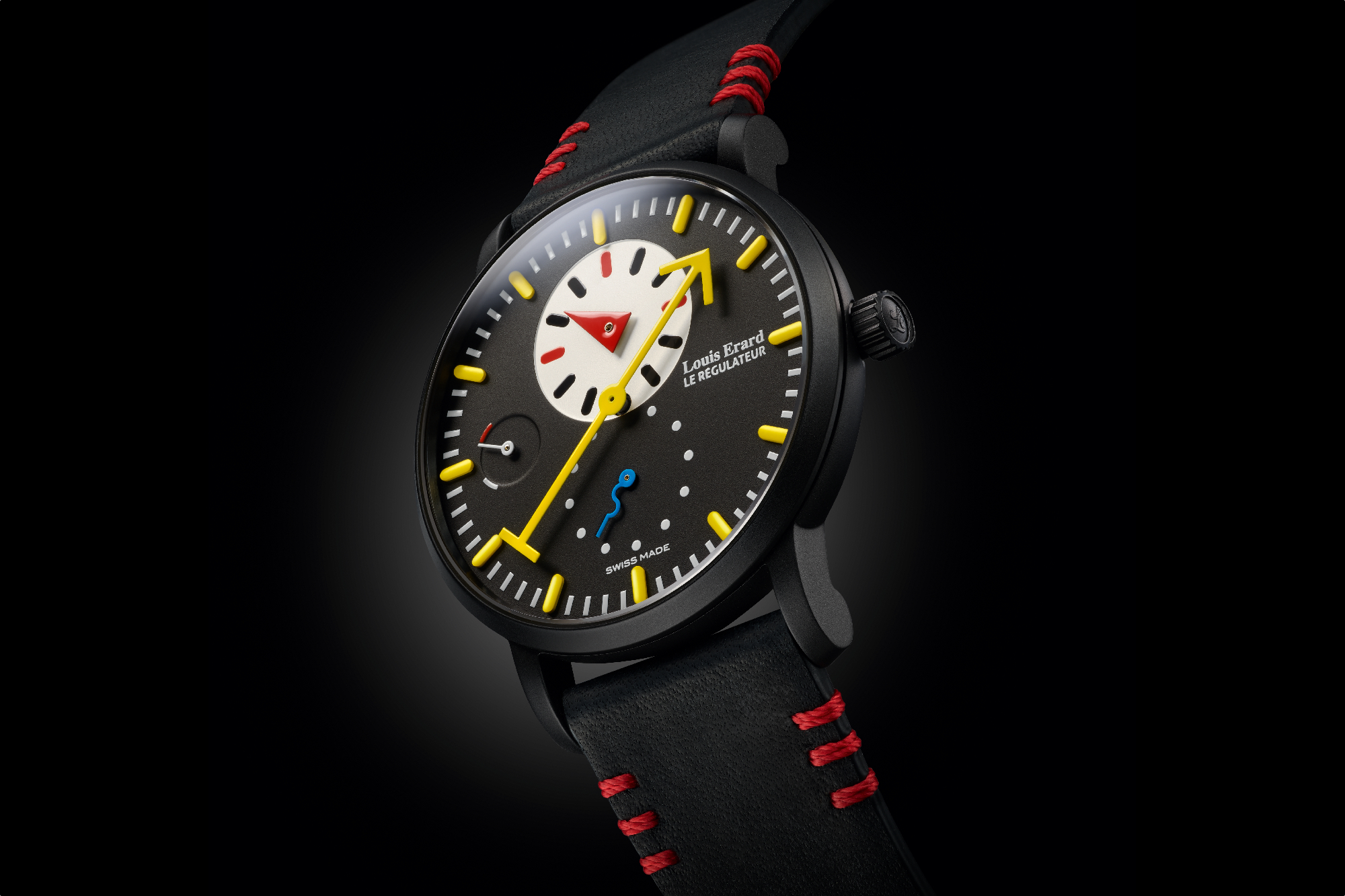 Louis Erard and Alain Silberstein have collaborated to produce a limited edition timepiece with Silbertein’s signature colors and aesthetic.

Despite disappearing in 2012 after the company went out of business, Alain Silberstein, the namesake founder, has worked with at least a few other watchmakers to infuse his hard-to-miss style into timepieces from watchmakers such as Romain Jerome, and in 2016 he worked with MB&F on this piece.

Presented in a 40 mm steel case, the Louis Erard Alain Silberstein Regulator comes in two variations: black PVD with a black dial or an untreated steel case with a white dial. Silberstein was clearly able to use even more of his signature design language in this timepiece than the aforementioned MB&F. The result is quite nice actually, a conservative-sized case with anything but conservative colors and shapes.

In addition to the look, the other unique aspect is that the watch is a regulator, meaning all the time functions distinctively separated on the dial. The hour display sits in a white subdial at 12 o’clock and is indicated by a large lacquered red triangle-shaped hand with red and blue indices. The giant bright yellow lacquered minute hand (on black version) is bonkers, with its arrow-shaped tip and counterweight that actually slightly longer than the tip, the effect is cartoonish, and will surely be attractive to buyers wanting something unusual.

The small seconds subdial continues the eccentric goodness with a squiggly-shaped hand in lacquered blue or yellow, depending on which version, and dots for the graduations. Lastly, there’s a power reserve indicator at 9 o’clock, which when pointing to red confirms you need to hand-wind it.

Driving the functions, and visible through a screwed sapphire crystal caseback (with a specially-decorated case back crystal: Alain Silberstein X Louis Erard 1 of 178), is a manual wind ETA Peseux 7001 movement that’s been modified with Louis Erard’s RE9 complication. The add-on module increases the 26 mm x 2.5 mm movement thickness to 4.7 mm and adds a power reserve indication. The movement beats at 3Hz, has 17 jewels, and a 42-hour power reserve. It’s a top-grade movement with a Côtes de Genève decoration, blued screws, and Louis Erard engraving.

The regulator, says Alain Silberstein, “transports him far away to the clocks on buildings which historically told the time with just one hand, or to train station clocks. This is what inspired his regulator.”