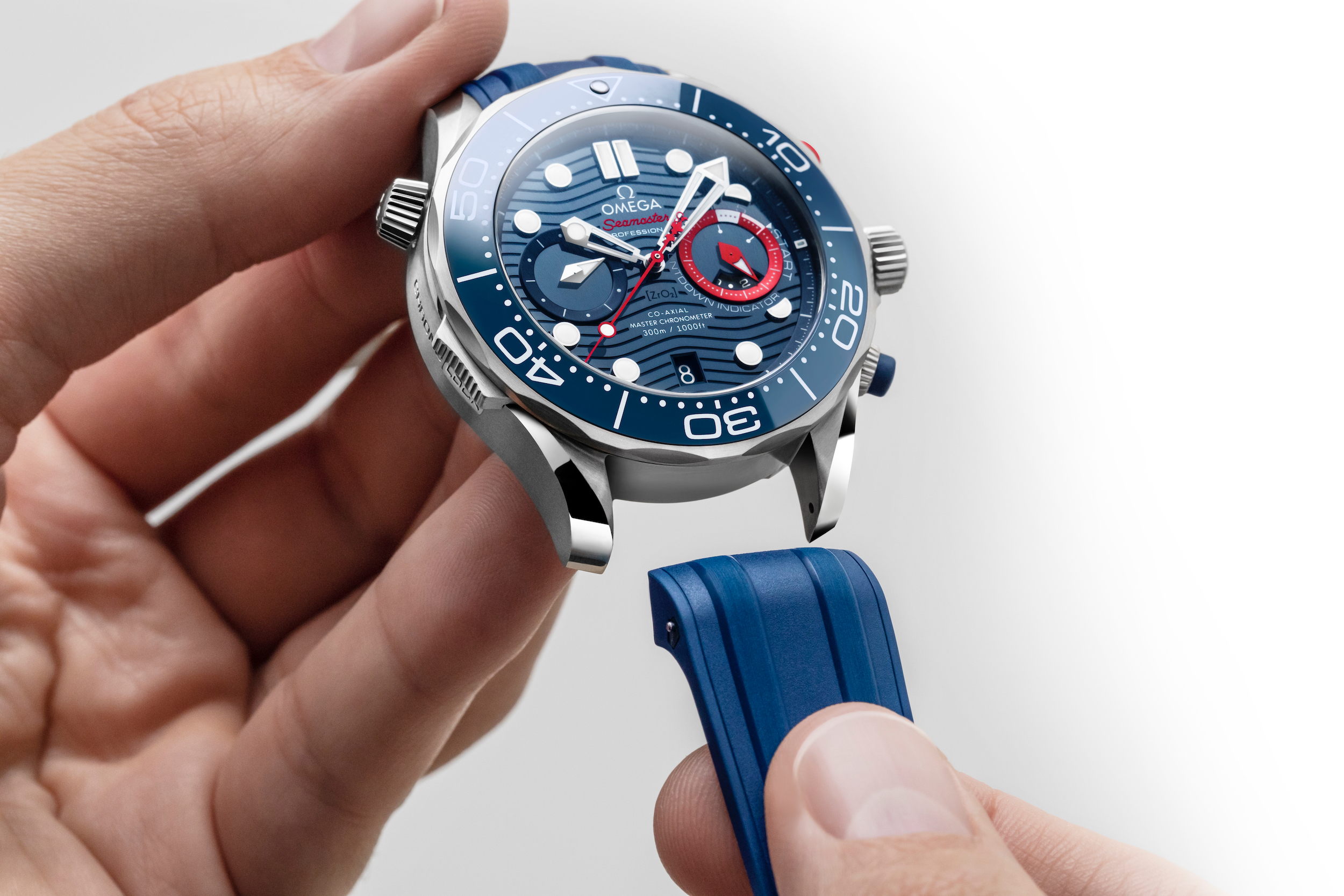 The Seamaster Diver 300M America’s Cup Chronograph comes in a 44 mm stainless steel case with a blue ceramic dial and a steel bezel with a blue ceramic insert that matches the dial. A laser-engraved wave pattern distinguishes this as a dive watch made for the ocean, and in this case specifically for competitive sailing.

As usual, with America’s Cup Chronographs — that Omega has been making for the past 20 years — the dial features a regatta countdown timer which counts down the time before the start of a regatta race, allowing the sailboat to optimally move into position at the starting line, precisely by the start of the race, without crossing the starting line.

The regatta countdown timer uses a standard chronograph but displays minutes, via a bright red anodized aluminum ring at 3 o’clock, so as to countdown, not up like a typical chronograph minute indicator. The first ten minutes are specially marked, with the last five minutes representing five minutes before the race starts. The word “START” is marked in white right where the ten-minute mark ends.

Underneath the same subdial, is a chronograph minutes disc that indicates the elapsed amount of hours counted by the chronograph. A running mall seconds display is visible opposite the chronograph subdial at 9 o’clock. Both subdials feature short, wide Dauphine-shaped luminous hands (inspired by the shape of a boat hull).

The primary dial displays the time via oversized applied circular indices, except at 12 where there are double baton indices, and at 6, where an aperture indicates the current date (which is something Omega probably should have removed to declutter the dial). At 3 and 9 the subdials take up so much space that the hour markers are represented by small white rectangles, printed on the chapter ring/flange instead of being applied to the dial. Extra-large skeletonized sword-shaped luminous hands indicate the hours and minutes. A red lacquer center second chronograph hand, with an America’s Cup counterweight, can display the chronograph seconds when the chrono is running.

Omega enhanced the utility of this professional watch by making the chronograph pushers with a soft touch rubber surface that are color-matched to the dial, in blue and red, and which are designed to enhance grip, even when wet.

Further adding to the usefulness of the watch, is a new Chrono-Lock system which has a slide lock on the left case flank that can lock out the chronograph functions to mark a specific time (or lap) without the chance of inadvertently activating the chronograph.

This a. commemorative watch and the caseback reflects this with the event and year clearly marked and highlighted in bold and engravings filled with blue lacquer that spell out “36th America’s Cup” and “Auckland 2021.”

Omega’s Co-Axial Master Chronometer caliber 9900, visible through a sapphire caseback, drives the time, chronograph, and date. On the left flank, above the Chrono Lock, is a helium escape valve, making this suitable for saturation diving. As the watch name suggests, it’s water-resistant to 300 meters.

The Seamaster Diver 300M America’s Cup Chronograph comes with both a rubber strap and a stainless steel bracelet and each comes with a new Quick Change system that allows one press removal of each strap, without tools. (Ref. 210.30.44.51.03.002) Retail is $10,700.