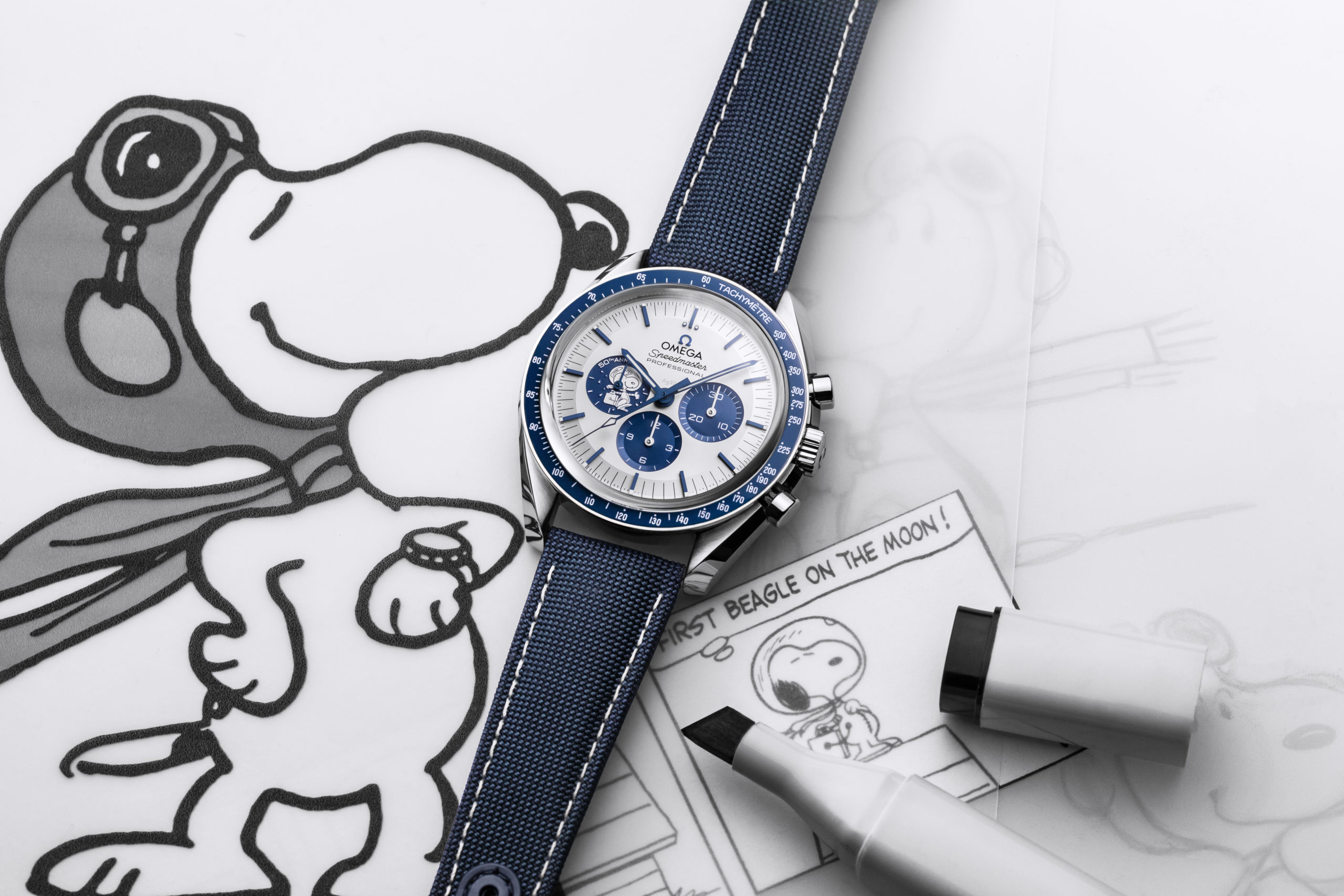 In 1970, Omega received the “Silver Snoopy Award” from NASA, which recognized the company’s contributions to space exploration, during the 1969 Apollo 11 moon landing, and during the rescue of Apollo 13 which utilized an Omega Speedmaster to manually time the re-entry due to onboard systems failure.

Fifty years later, those two space flights are still amongst the most historic in NASA history, and a Speedmaster is also still the standard-issue watch for NASA astronauts. Introducing the 2020 Speedmaster “Silver Snoopy Award” 50th Anniversary Edition.

Presented in the standard 42 mm stainless steel Speedmaster Professional case, the latest Snoopy Speedmaster has a silver dial laser engraved with “Ag925” in the center (just above the handset), blue PVD angled baton-shaped hour markers and pencil-shaped hands, three blue subdials including and an embossed silver Snoopy motif appearing on the small seconds register at 9 o’clock.

Driving the hours, minutes, small seconds is Omega’s latest Co-Axial Master Chronometer caliber 3861, which for this special edition is covered by a solid screw-in caseback with the company’s NAIAD lock system which ingeniously keeps the engravings in the upright position.

In this instance, the perimeter of the caseback in encircled with “April 1970” (the date of Apollo 13), “October 5, 1970” (the date NASA presented Omega the Snoopy award), and “APOLLO XIII.”

Most notably, in the center is a depiction of the lunar module, with a Snoopy image on it, orbiting the moon. Interestingly, the black and white Command Service Module (CSM) on the caseback is animated, via what Omega refers to as a “magical hand.” When the chronograph seconds hand is in use, Snoopy takes a trip around the mysterious far side of the moon — just like the Apollo 13 crew — with the lunar surface being decorated on the sapphire crystal using a unique micro-structured metallization. There’s also an Earth disc that rotates once per minute, in sync with the watch’s small seconds hand. The iconic quote, “Eyes on the Stars,” is written out in space above the animation.

The 2020 Omega Speedmaster “Silver Snoopy Award” 50th Anniversary comes with a blue nylon textile strap that features the trajectory of the Apollo 13 mission, embossed on the lining. Further, the tachymeter scale has the iconic “Dot over Ninety,” which is shown in white enamel on the blue ceramic [ZrO2] bezel insert.

Retail is $9,600 and for the first time, this Snoopy Speedmaster will be a regular production model.