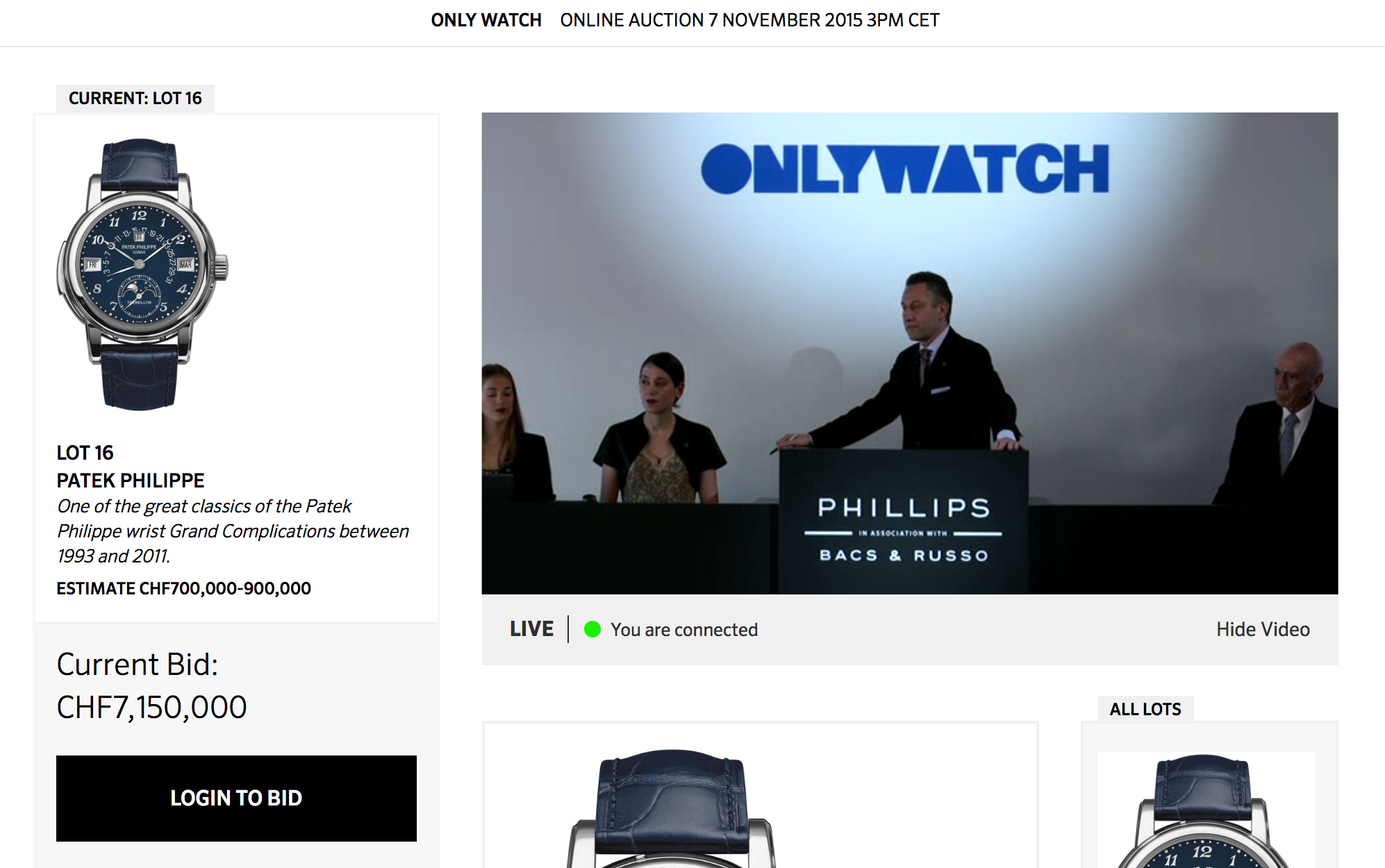 Only Watch 2015 Highlights and Results

The 6th edition of Only Watch just concluded in Geneva. Read on for a quick recap.

Only Watch is a charity auction, managed by Phillips auction house, under the scholarship of the world’s most renowned watch auctioneer, Aurel Bacs. And as expected, the results were quite impressive. With a total of 44 lots, Only Watch 2015 brought in 11.293 million CHF. Best of all, only about 2% of that goes to costs, the other 98%, approximately 11 million CHF, goes directly to fund research to find a cure for Duchenne Muscular Dystrophy.

Not surprisingly, the *belle of the ball* was the Patek Philippe timepiece, which hammered at an astonishing 7.3 million CHF! Currently, the most ever paid for a timepiece at auction. But there were a number of other pieces that exceeded expectations as well.

Tudor’s unique Black Bay One skyrocketed over estimates and hit 375,000 CHF, or over 100 times higher than the low estimate. Pretty impressive for a watch that would normally retail for about $3,200.

The Louis Vuitton Escale Worldtime Only Watch 2015 “The World is a Dancefloor” sold for 130,000 CHF, practically double the high estimate.

Interestingly, LeRoy offered a unique watch with a unique movement that will not be seen in future production models. Yes, even the movement was unique to Only Watch, which is a first. Accordingly, it sold for 75,000 CHF, more than double the low estimate.

Ulysse Nardin offered a special musical piece that plays “We are the champions” which sold for a commendable 120,000 CHF, exceeding estimates. Vacheron Constantin’s unique skeleton piece sold for 140,000 CHF, also well over estimates. Voutilainen’s unique timepiece hit 145,000 CHF, at an estimate of 90,000-100,000 CHF. And right at the end, lot 44, a unique URWERK timepiece, hit 90,000 CHF, after a long (and entertaining) back-and-forth bidding war.

Again, every watch entered resulted in many thousands of dollars being generated for Duchenne Muscular Dystrophy, so every brand who participated is a winner. And for those brands that did not, hopefully, you will participate in 2017!