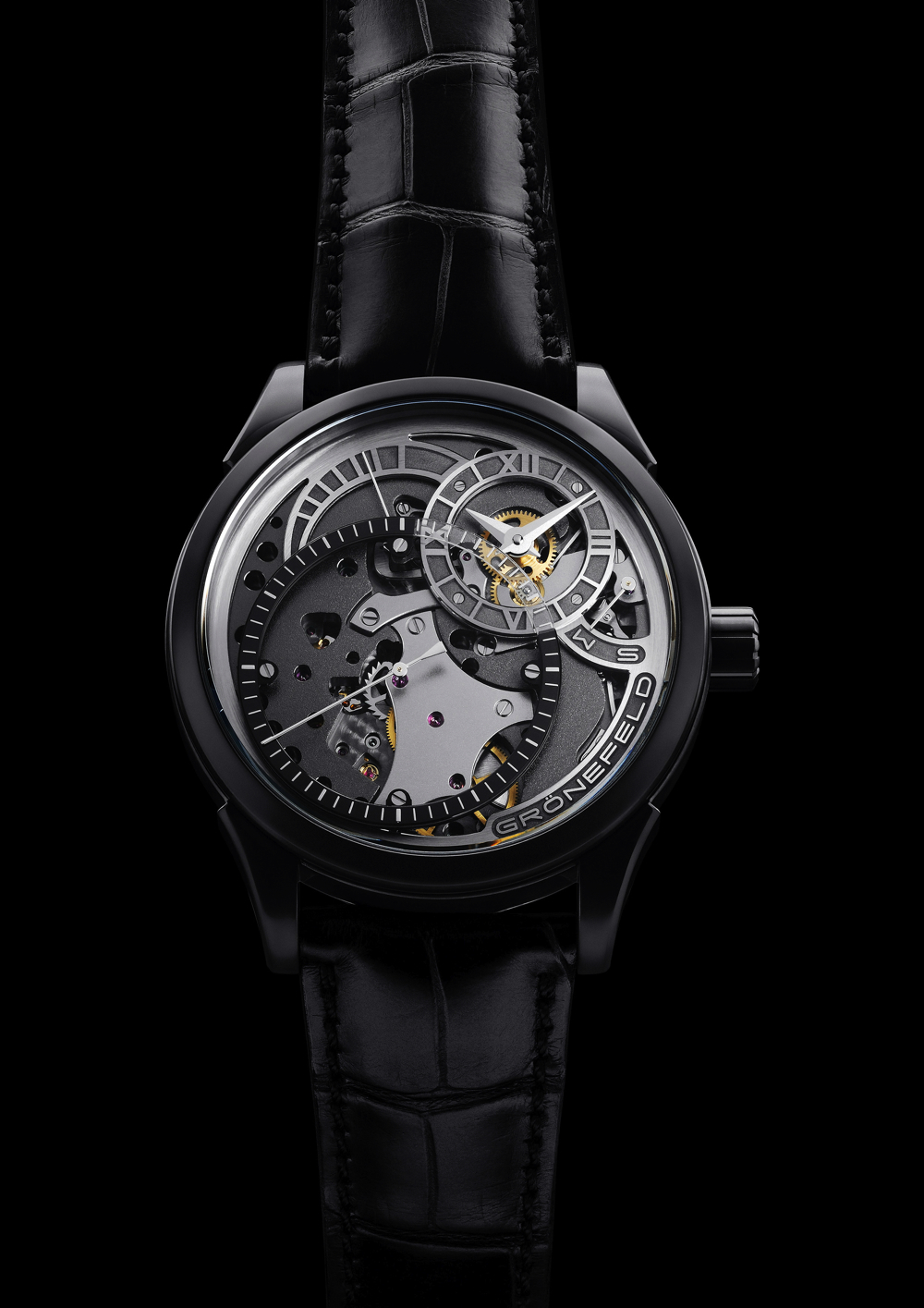 Building on the momentum from the Grönefeld One Hertz, which won Time Zone’s watch of the year award last year, Bart and Tim Grönefeld have launched a new model — the One Hertz Techniek. It is an open-work dial version of the One-Hertz, the world’s only series wristwatch with independent dead seconds. Presented in a polished and brushed titanium (or a grade 5 titanium DLC case) the One Hertz Techniek and Techniek Nocturne, respectively, come in the same case dimensions, and have the same in-house caliber G-02 movement as the original One Hertz, now in a stunning skeleton dial. If you liked the original, then you are likely going to love this one.

The highlight of the watch is the dead seconds function, which unlike other dead seconds displays seen on wristwatches, is powered not by a constant force mechanism or a remontoir d’égalité, but by a secondary gear train, independent of the gear train for the hour and minute indications. With dead seconds, instead of the seconds hand smoothly sweeping the dial, it advances in full steps every second, like a quartz timepiece. Historically, this function was all about accuracy, now it is more about paying homage to the past.

Like on the first One Hertz, the Techniek, prominently features the dead seconds in the lower right section of the dial. A large sapphire crystal sapphire ring displays the seconds hand. The sapphire crystal is black for most of the ring, but where the seconds ring connects with the hours and minutes display, the sapphire is clear, allowing for easy reading of the hours and minutes beneath. Below each of the subdials, the mechanics which power the hands of the displays can be seen, thanks to the open worked dial. At the top of seconds dial at 11 o’clock, the power reserve indicator can be seen, along with the lever and spring, which are visible just beneath the seconds ring.

“With the One Hertz, winding and setting are selected by pushing the crown in, instead of pulling it out – a very ergonomic system. The winding-setting (W S) indicator at 3 o’clock provides a neat visual signal as to the mode selected, and the winding-setting lever and its spring are visible around the indicator thanks to the open dial. What’s more, the counter-poised seconds hand can be ‘hacked’ – i.e. stopped – when ‘setting’ is selected, to ensure maximum precision when adjusting the time.” The hour, minute, power reserve and winding indicators are relief engraved, bevelled and finished completely by hand.

Another feature that sets the One Hertz apart from other watches, is Grönefeld’s ergonomic winding and setting mechanism, selected by simply pushing the crown in, rather than pulling it out.

“Turning over the One Hertz Techniek completes the mechanical feast for the eyes with the sumptuous display back featuring no fewer than nine finely-crafted stainless steel finger bridges. The One Hertz is the world’s first series movement with all the bridges in stainless steel.”

The meaning behind the name “One Hertz” explained by its creators:

‘Mechanical wristwatch movements often have balance frequencies of 2.5 to 5 hertz, which results in the seconds hand making tiny steps of 5 to 10 steps each second and looking like a smooth movement. The seconds hand of the One Hertz is either stationary (dead) or jumping in a full one-second increment each second.

Displaying dead seconds in a wristwatch without a constant force device is no easy task. The friction of the mechanism has to be absolutely minimal so it does not interfere with the escapement.

Bart and Tim Grönefeld used an independent dead seconds mechanism that is driven from its own secondary gear train with its own power supply. The seconds are driven from one mainspring barrel and the hours and minutes from another. Friction is with this system guaranteed to an absolute minimum and the complication has no adverse influence on the escapement and free sprung balance.

The two mainspring barrels are wound simultaneously from the crown, which features an innovative “push to set”, “push to wind function”, with the mode selected indicated at 3 o’clock. A power reserve indicator at the top of the dead seconds dial keeps track of the 72 hours of autonomy.”

The “One Hertz Techniek” is a limited edition of 30 pieces. As I mentioned above, it is available in either Grade 5 polished and brushed titanium or black DLC (Diamond Like Carbon) coated titanium. Each piece is engraved with a number between 1 and 30.

The caliber G-02 movement features hand winding, independent dead seconds, a power reserve indicator and a setting mechanism indicator. It consists of 285 components, 39 jewels set in gold chatons. It runs at 21,600 vph (3Hz), has a 9.12 mm free sprung variable inertia balance wheel, 2 barrels (one for the going gear train and one for the independent dead second mechanism. Both are barrels are wound at the same speed and in the same direction.) Power reserve of 72-hours. Swiss lever escapement and unique dead seconds escapement.

The One Hertz is a both visually and technically impressive. It is easy to understand why it has received Time Zone’s top honors. And now, with an open-work version, visually, it is even better. 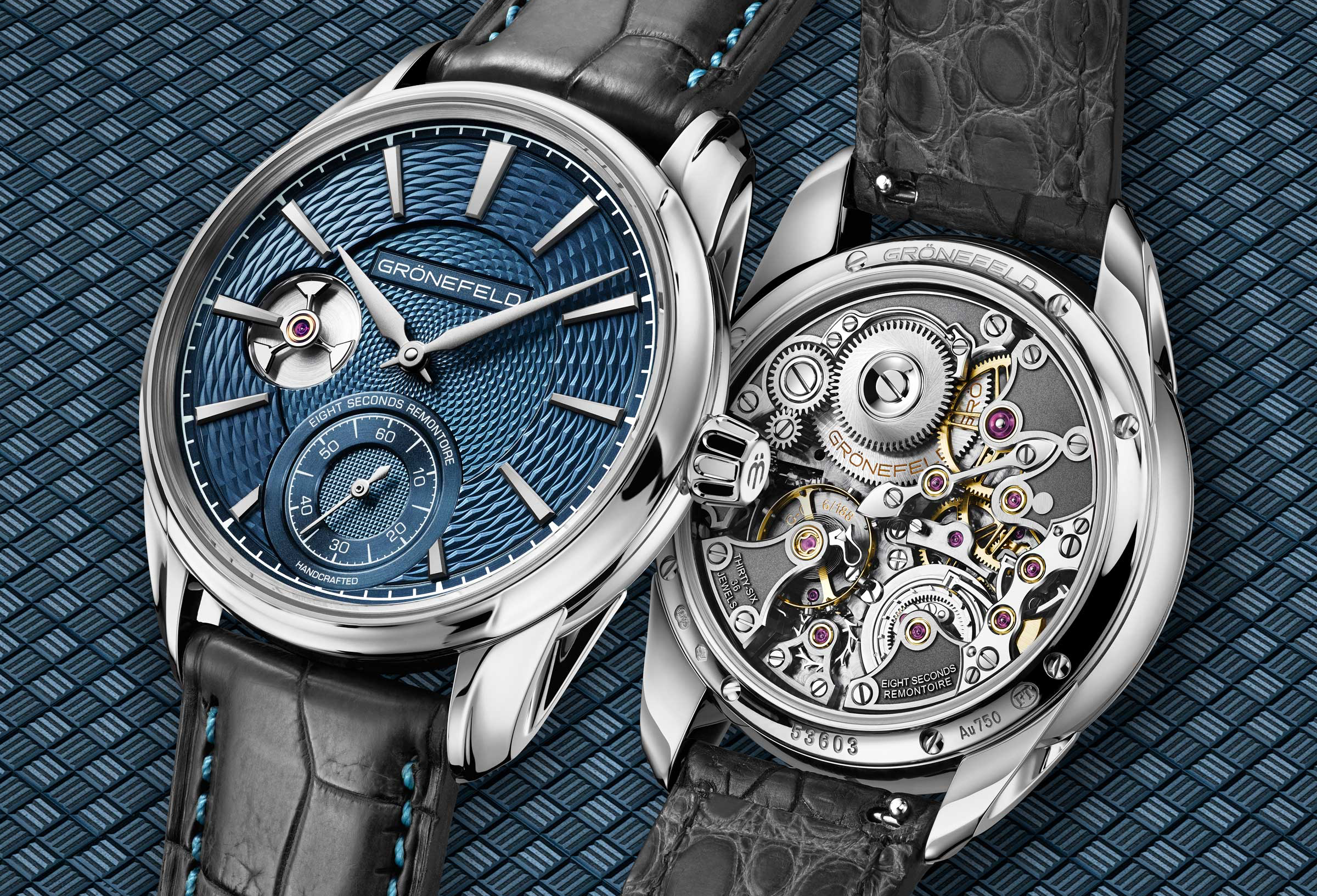