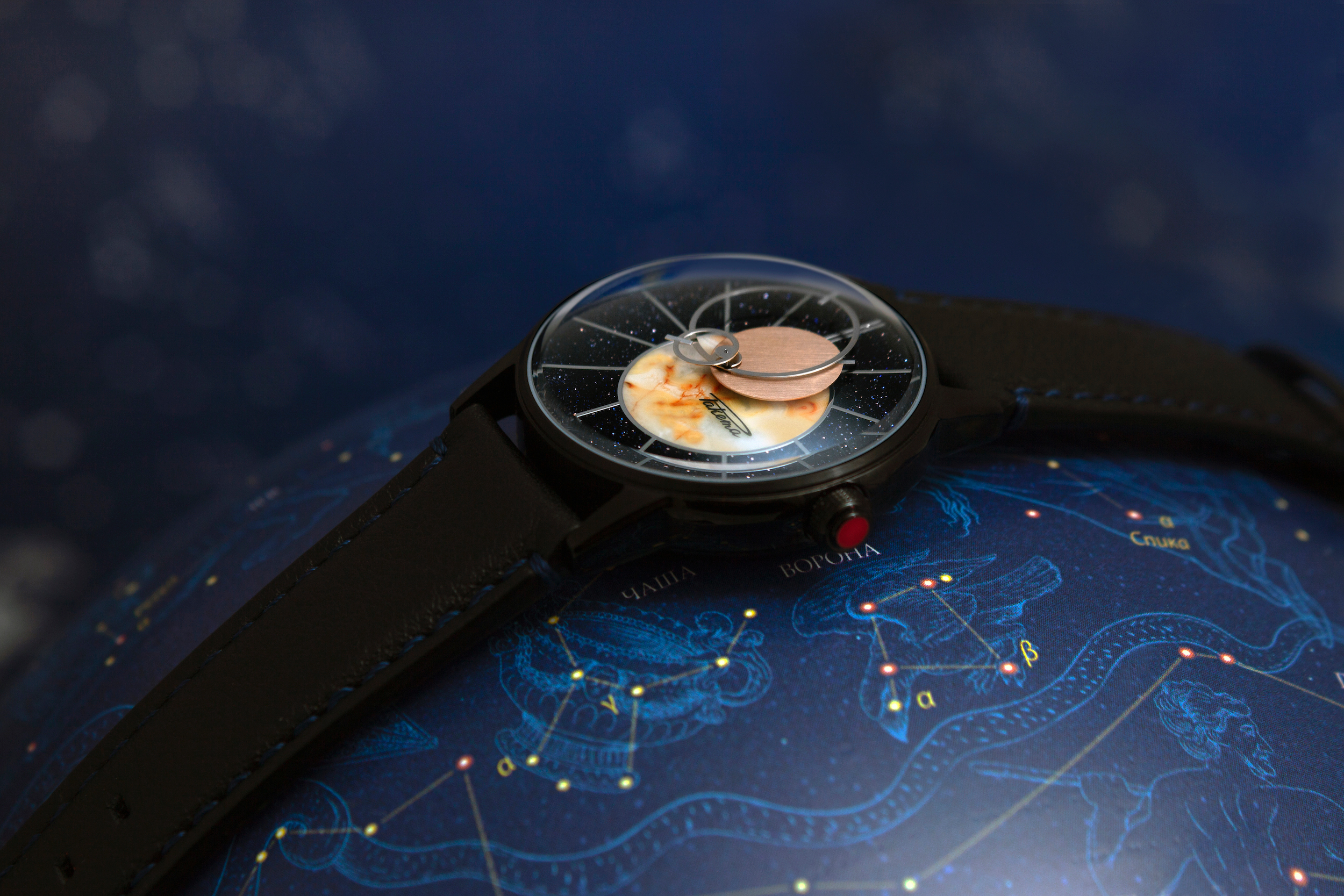 Russian watchmaker, Raketa, created a new limited edition timepiece with a space theme, although there are no astronomical complications per se.

The Copernicus 0280 timepiece is presented in a 40.5 mm x 16.55 mm (45 mm lug-to-lug) stainless steel case, with a fixed bezel, and has been treated with a matte black PVD coating.

As for the space theme, the main dial is made from semi-precious aventurine stone (Outerspace) and yellow agate (the Sun) for the secondary off-center dial. The largest ring is the minute hand (Earth), the mid-sized ring is the hour hand (Jupiter), and the smallest ring is the center seconds hand.

“When Soviet Raketa designers created the Copernicus model, they had the following idea in mind: the big circle (minute hand) symbolizes the Earth, and the intermediary circle (hour hand) symbolizes Jupiter. Why? Because the Earth orbits the sun in 1 year and Jupiter in 12 years: exactly the same ratio as between the minute hand (big circle) that ‘orbits’ the dial in 1 hour and the hour hand (intermediary circle) that ‘orbits’ the dial in 12 hours,” according to Raketa’s press release.

Driving the hours, minutes, and seconds rings is Raketa’s caliber 2615, the same 2.5Hz 24-jewel in-house automatic movement that’s used in the Avant-Garde Limited Edition 0279 that we covered earlier this year. The watch has a 40-hour power reserve with a bi-directional winding rotor, meaning it winds the mainspring in both directions, and is capable of hand winding. Each movement is tested in 4 positions and leaves the company’s Saint Petersburg watch factory with an adjusted rate of -10/+20.

For this special model, the movement has been gold-plated, engraved, printed on, and has what the company calls “Neva waves” applied by hand (which are their version of circular Geneva stripes, seen on the rotor).

A domed sapphire crystal protects the dial side while a lower-cost mineral crystal is used for the caseback. The depth rating is 50 meters. The included black leather strap is 22 mm at the lugs. The Copernicus 0280 (Ref. W-05-16-10-0280) is limited to 300 pieces and the retail price is approximately $1,750.