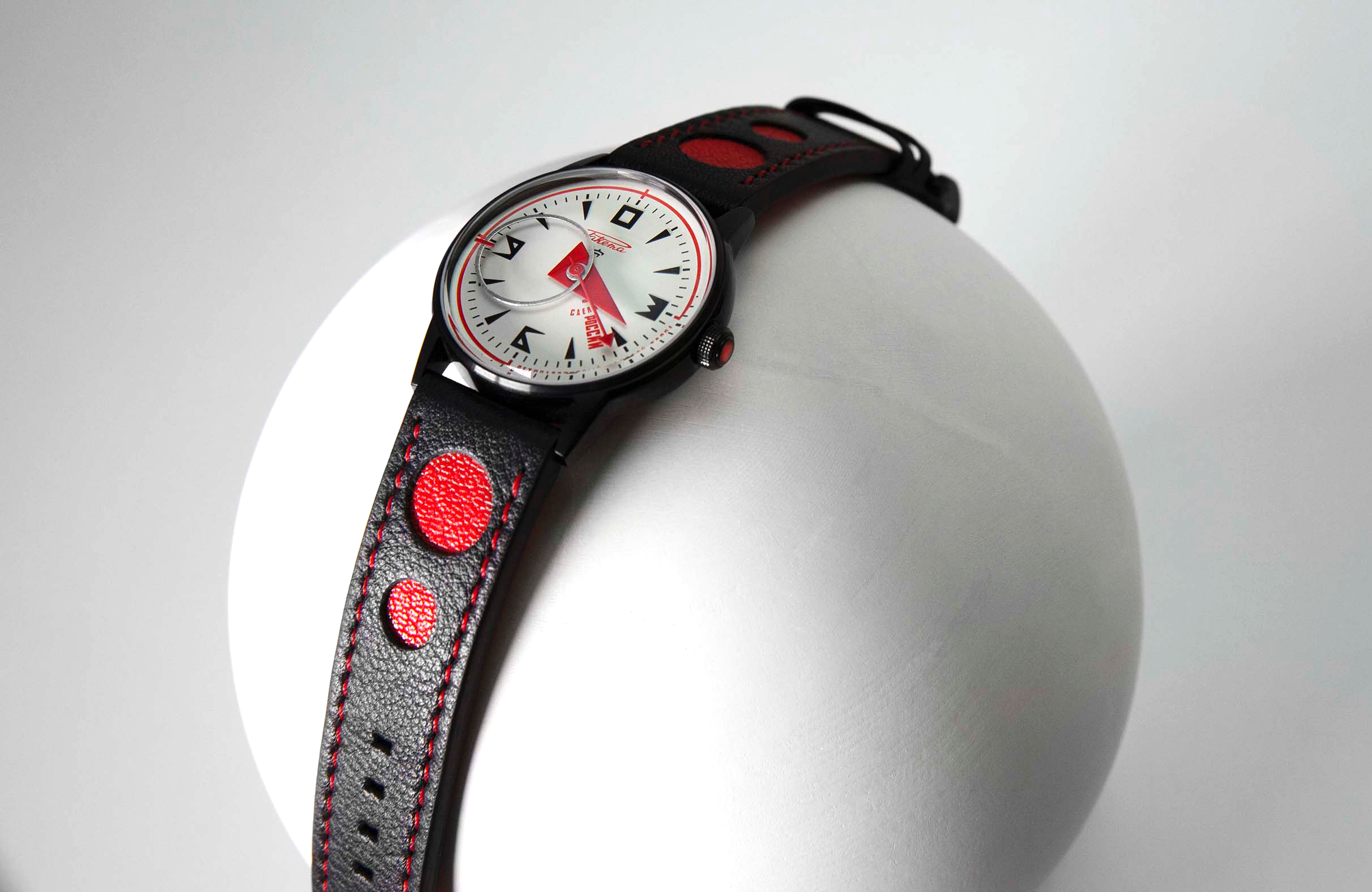 Raketa is a Russian watch brand that produces wristwatches with a bold and unmistakable look, powered by in-house Russian-made movements, offered at accessible prices.

For the first time covering the Russian watch brand (or any Russian brand), we will discuss Raketa’s just released 300-piece limited edition timepiece designed as a homage to Avant-Garde art.

Following a difficult period after the fall of the Soviet Union, the Factory launched a modernization program in 2011. It is now one of the very few watch factories in the world to produce every part of its own mechanical movement, including the most complex items such as the hairspring and the escapement.”

Based on Raketa’s existing “Avant-Garde” watch collection — the most recognizable of the company’s designs — the Avant-Garde Limited Edition 0279 dial looks like an abstract piece of art, with geometric shapes floating around the dial to tell the time, and is highly reminiscent of something you might see produced by Alain Silberstein or Max Busser.

The hour hand is a large triangle with bright red matte lacquered paint. Perhaps most distinctively, the minute hand has a large open circle shape and is painted with a matte silver-color, with a red baton on the end that points to the current minute. The most traditional look of the three hands is the second hand, which has a matte red lacquer, like the hour hand, with a long arrowed tipped design.

Even the hour markers are unconventional, with abstract shapes printed directly on the dial place of traditional Arabic numerals or indices. Surrounding the hours is an open chapter ring printed in black to indicate minutes and seconds. Encircling this is a bright red circle, with marks at 12, 3, 6, and 9.

Flip it over and you’ll see the additional value this company is offering in the form of their caliber 2615 in-house automatic movement. It’s not Swiss-made, nor is it rated to chronometer specifications, but considering most watches in this price point have off-the-shelf movements, this is a huge benefit perceptively.

The 2615 automatic movement, which first debuted in 2014, is entirely designed and produced at the Raketa Watch factory in Saint-Petersburg, Russia. Incredibly, this is the first new automatic watch movement made in Russia in the 21st century.

Beating at 2.5Hz, the bi-directional winding automatic movement has 24 jewels, a 40-hour power reserve, hand winding, and is adjusted to -10/+20 before it leaves the factory. Gray and metallic surfaces, that are highly industrial, cover the mainplate, bridges, rotor, and other components, and this is perfectly acceptable considering the price point. The rotor has ceramic ball bearings, and the balance has an index regulator, and there are no silicon or advance features, but it’s a proper workhorse movement that they can enhance over time. One thing that caught my eye is how the dark finishing makes the jewels stand out, which is quite attractive.

Compared to existing Avante Garde models, this one has a special black PVD steel case. The scratch-resistant stainless steel case measures 40.5 mm x 16.55 mm, with a 45 mm lug-to-lug measurement. And while 16.55 mm tall is incredibly high for a 40.5 mm watch, they manage to pull it off because much of the height comes from a super domed sapphire crystal, not the case itself, which proportionally looks good versus.

For this limited edition, the caseback has a mineral glass (which saves money and should not matter because it’s unlikely you’ll ever scratch the caseback), and instead of a small window like previous models, the wider opening gives a better view of the movement.

Completing the Raketa Avant-Garde Limited Edition 0279 is a black leather strap with large circular openings that reveal the red material underneath. The interlug width is 22 mm. (Reference: W-06-16-10-0279) Retail is approximately $1325.

Jason Pitsch is the Founder of Professional Watches. He specializes in reporting on the watch industry and is interested in continually learning about all aspects of watchmaking craftsmanship, history, and design.