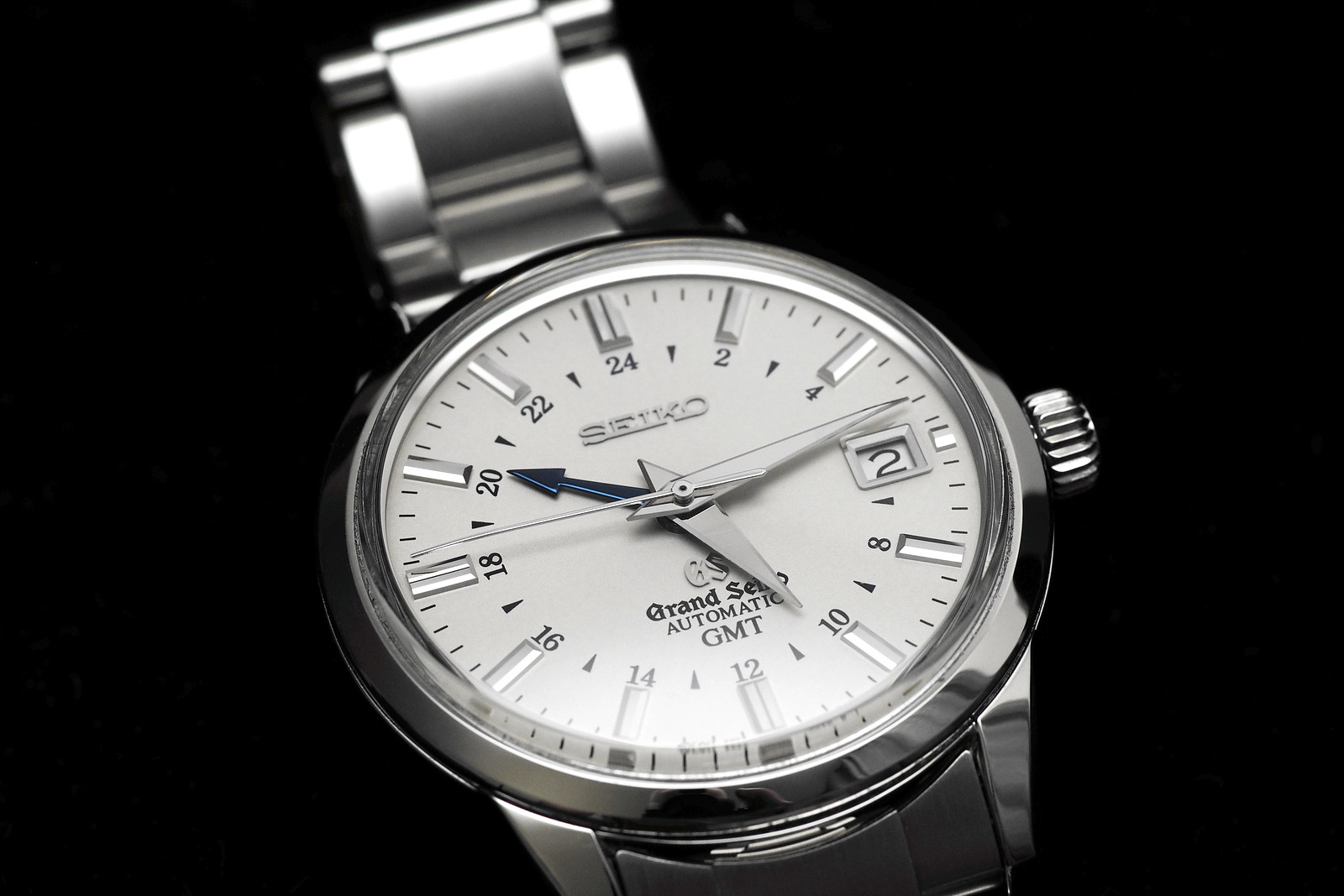 Dating back to 1881, Seiko is Japan’s oldest watchmaker. Grand Seiko, which was founded in 1960, is the company’s high-end watch line. There is even a higher line called Credor, but those pieces are significantly pricier and very rare.

Grand Seiko is amongst a very elite group of mechanical watch manufactures (including Rolex) that can produce an entire mechanical timepiece – meaning the case, hands, dial, movement, fully in-house – from start to finish.

And like the aforementioned brand, Grand Seiko is able to use their absolute control of production, as well as their watchmaking know-how, which dates back to the late 19th century, to produce superb timepieces. Every detail of a Grand Seiko exudes high-quality craftsmanship.

The dial of this Grand Seiko GMT (Ref. SBGM023) is silvered, but in a certain light, it looks almost cream-colored. Production of the dial requires a lengthy process that includes metal plating and then spraying of multiple layers of clear coat. And while the industry standard for the amount of clear coat applied to the dial is 10-15 micrometers, Grand Seiko instead uses 50 micrometers. Why. To ensure that the dial is not discolored, and to increase durability. In fact, Grand Seiko is unique in that they do drop tests on all of their dials, further guaranteeing the utmost quality.

One of the details that sets apart high-end timepieces is the movement finishing, of course, but also, the case finishing.

Like the dial, the hands are manufactured with meticulous attention to detail. They are diamond cut to a “razor-sharp edge” according to the manufacture, reflecting even the smallest light. By reflecting the light, the hands not only more pleasing to the eye, aesthetically speaking, they also stand out better against the dial, for enhanced legibility, even in low-light. Grand Seiko says that the light reflected is sufficient enough that no luminous material is needed on the hands.

Similar to the hands, the hour markers are also diamond cut, with excellent reflective properties thanks to 5 angle edges. This also works to enhance visibility, even in low-light, and so like the hands, no luminous material is used.

Even the blued steel 24-hour hand is made in a unique way compared to most manufacturers. Instead of bluing hands in batches, which I have personally seen done at high-end Swiss factories, each hand is blued individually by hand.

Similar to other GMT wristwatches, changing the local time (the primary hour hand), is handled via a crown-controlled “quickset” function that automatically makes the hour hand jump in 1-hour increments, without affecting the blue 24-hour hand or the seconds hand.

The Grand Seiko GMT, like most of the Grand Seiko line, has very conservative dimensions, which is a good thing for purists who prefer moderate-sized cases, such as myself.

The stainless steel case measures 39.5 mm x 14 mm, with a length of 46.5 mm, and a total weight of 153.3 grams. The result is a conservative look, that wears very well on the wrist. Moreover, the ultra-smooth case and bracelet also add to the nice feel on the wrist. To me, the case is not too big or small, it is just about perfect.

One of the details that set apart high-end timepieces is the movement finishing, of course, but also, the case finishing. And this case is not an exception. It is quite exceptional actually. Thanks to special production techniques that begin with a unique 15-stage forging process designed to sharpen the case, and that ends with multiple stages of “blade” polishing by hand, Grand Seiko cases are some of the best in the industry.

Each Grand Seiko case has a mirror surface, polished by hand to ensure no distortions. The process is known in Japan as “Zaratsu,” and is conducted by only a few of the craftsmen. “The sculptural curved surface is perfectly polished and is extended to the edge of the lug smoothly without distortion,” according to Grand Seiko.

A boxy dual-curved sapphire sits atop of the dial, and gives the watch a nice appearance, without bulging out as some domed crystals do. There is an anti-reflective coating that makes viewing the dial ultra-clear in various environments such as bright sun, shade, indoor, and so on.

A stainless steel screwed caseback holds a flat sapphire crystal in place on the back, offering a nice view of the beautifully finished manufacture movement. The is a nearly invisible laser inscribed Grand Seiko icon embedded in the rear sapphire glass.

The bracelet, which is reminiscent of a Rolex bracelet, is stainless steel with a tri-fold clasp and push-button release. Again, like the case, the finishing, particularly the polishing, is just superb. Each individual link is hand polished on the ends and satin-brushed on the top and bottom.

The careful angling of the bracelet links, as well as the caseback, results in a very comfortable wearing experience. The bracelet is 19 mm wide at the lugs and tapers down to 18 mm at the buckle.

Attaching and detaching the bracelet is a breeze, thanks to pierced lugs. The bracelet has screwed links and can be adjusted easily as well.

A ridged 6 mm diameter crown controls all functions and is emblazoned with a relief engraved ‘GS’ logo. Instead of a push-in crown, I would have liked to see a screw-down which would have allowed water-resistance to be pushed from 30 meters to at least 100 meters. Definitely not a deal-breaker but I think for a sporty watch such as this the rating should be higher.

Grand Seiko is a fully integrated manufacture, which means they make everything, including, crucially, the regulating assortment, the bridges, the wheels, and so on.

Some of the noteworthy technologies include a balance spring and mainspring made of a proprietary alloy called SPRON 610. The former is more stable against temperature fluctuations and enhances anti-magnetism and shock resistance than a traditional balance spring. The latter enhances the elasticity and durability of resulting in a 72-hour power reserve compared to a mainspring made from traditional materials.

Even the automatic winding has been improved over the standard in that it winds in both directions, resulting in the full winding of the mainspring with less wear (just a few days).

The finishing looks somewhat industrial, compared to Swiss Haute horology, which almost always includes hand bevelling of the edges of components such as the bridges (in addition to Geneva stripes and perlage, which the Grand Seiko does have). But considering the price, the aesthetic is quite nice. The striping, for example, has more of an industrial machined consistency to it, but it still looks great to the naked eye and viewed with a loupe, alike.

Animated by automatic caliber 9S66, the GMT Automatic beats at a modern rate of 4Hz (28,800 vph). The power reserve is approximately 72 hours, which is a very good range when you compare it to other movements, like say, the Rolex caliber 3186 which is in the modern GMT Master II, and has a 50-hour power reserve. The caliber 96SS has 225 total components, 35 jewels, and an anti-magnetic rating of 4,800 A/m.

Grand Seiko claims the accuracy of the timepiece to be -3 to +5 seconds per day (under static conditions), which exceeds COSC chronometer standards of -4/+6.

Grand Seiko is a Japanese company, and while they offer quality comparable to many Swiss watch brands, they have a distinct style all their own, just as German watchmaking has its own signature. Ultimately, like the Germans, Grand Seiko offers a Swiss alternative without sacrificing quality or accuracy. From the sublime finishing to the full in-house production, to the beautiful dials, and perfectly proportioned cases – Grand Seiko gets it right in so many ways. Especially with this GMT, one of my personal favorites from the line. The retail price is $4,600.