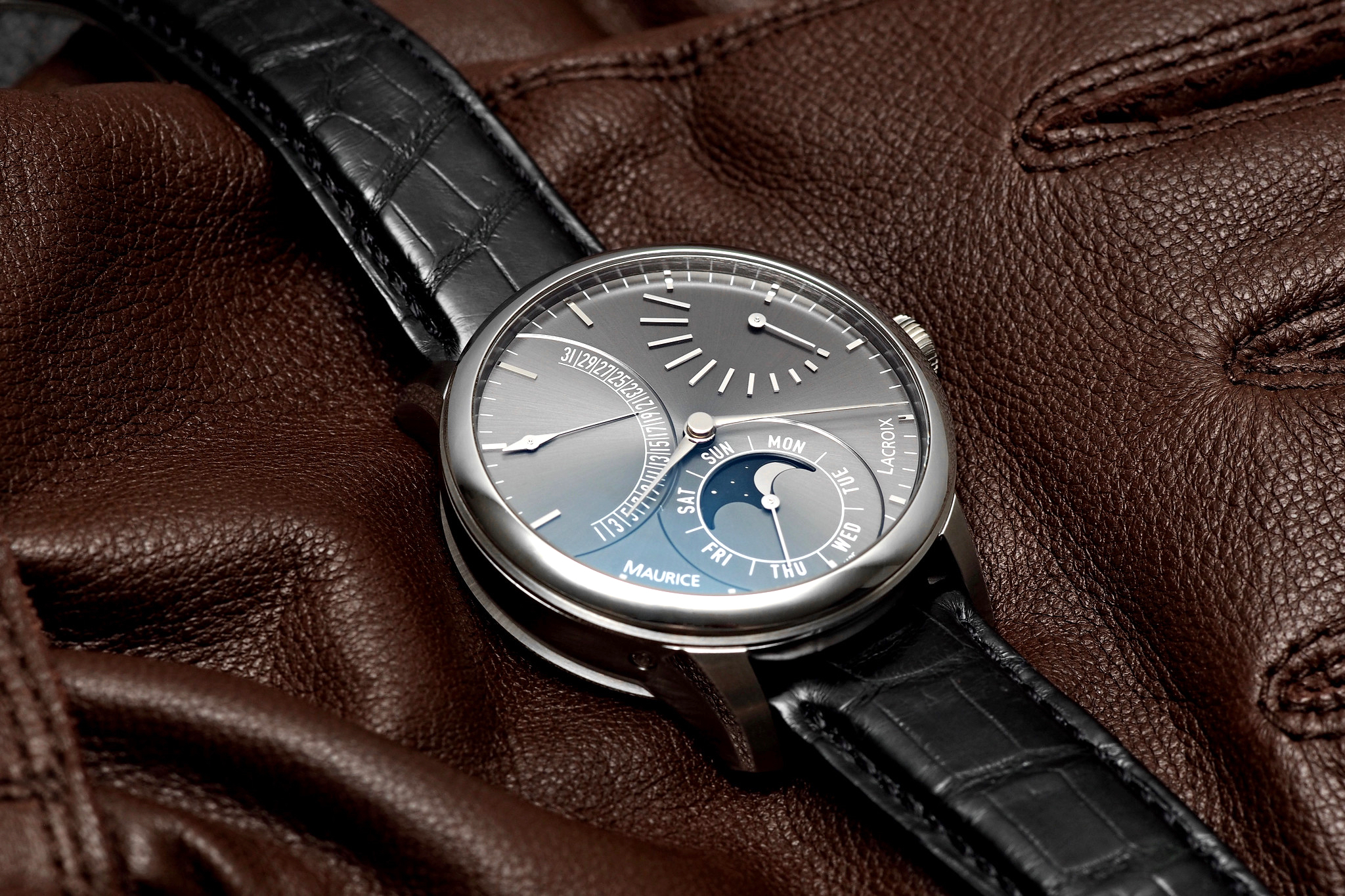 Founded in 1975, the relatively young Swiss watchmaker, Maurice Lacroix, is headquartered in Biel/Bienne and has a watch manufacture in Saignelégier.

Interestingly, the company we know today originally started at Desco von Schulthess, which began as a Zurich-based silk trading company, that after many years of exporting got involved in watch distribution, in 1946. They eventually did so well in the watch business that they acquired the Saignelégier-based watch assembler, Tiara, in 1961. The success continued to the point that Desco decided to create the brand Maurice Lacroix, in 1975.

Maurice Lacroix went on to acquire case maker Queloz S.A. in 1989, also based in Saignelégier. And today, Maurice Lacroix produces many of their own movements, thanks to the combination of vertically integrated manufacturing elements that were purchased over the years by Desco von Schulthess.

Beginning with a 925 solid silver plate, the Masterpiece Retrograde Moon dial is finished to perfection with a stunning sunburst pattern. The pattern is easiest to appreciate on the deep blue version, and the dark gray version I reviewed, whereas the third silver variant has the same finish but it is not as dark and so the sunburst pattern does not pop as much.

The dark gray dial sets the perfect background for rhodium-plated, applied diamond-cut baton-shaped hour markers. Unique stamped, diamond-cut head hour and minute hands, also have a rhodium-plated treatment.
This is a retrograde watch – one of Maurice Lacroix’s specialties – and so the date is indicated by a retrograde hand, meaning that when it reaches the end of the arc (the display is linear, not circular), the hand snaps back to zero instantaneously.

Phases of the moon are indicated by a disc that is visible through the aperture at 6 o’clock (adjusted by the recessed pusher in the case flank just below the crown).

A small hand at 6 o’clock points to the ring around the circumference of the moon phase display to indicate the day-by-hand (and is adjusted by the recessed pusher on the case flank just below the moon phase corrector).
A recessed corrector on the left case flank adjusts the retrograde date.

One of the best ways to differentiate a watch is to build some or all of the movement, in-house. How much of the movement must be made in-house is a highly debated topic, as is the sub-topic regarding vertical integration of manufacturing through acquisition, and in particular if such a movement deserves the so-called true “in-house” designation?

Beginning with a 925 solid silver plate, the Masterpiece Retrograde Moon dial is finished to perfection with a stunning sunburst pattern.

Despite that, the automatic caliber ML192 that powers the Masterpiece Retrograde Moon are listed by Maurice Lacroix as a “manufacture” or “in-house” movement. And they do manufacture it in their own factory. Although, it is widely known that the movement design is based on a Unitas 6497 (or ETA 6497).

Whether it deserves the highly coveted manufacture designation or not is debatable. Regardless, the company produces a movement that sets it apart – not by hand beveling the component edges or applying Geneva stripes, but by differentiating the movement from the rest of the market. And I do applaud that as a consumer, and as someone who is highly critical of what Swiss watch companies claim to be their own movements.

The movement is not going to visually impress with flashy finishes although it is worth noting that many timepieces in this price range utilize an off the shelf movements with little to no added value.

This movement is adjusted in 5 positions, and has some intricate finishing including vertical satin brushing on the bridges, polished screws, frosted finishing on part of the balance bridge, and a special sunray satin brushing on the oscillating weight that the company refers to as “Grand Colimaçon.” No Geneve stripes or perlage, but so what, it has an industrial modern aesthetic, that crucially, does not look like most of what is out there – which in my opinion is positive.

A curvaceous polished and fixed bezel, with a domed sapphire crystal, and short curved lugs give the watch a highly rounded appearance. Not to meniton allowing to sit nicely on your wrist.

The case measures 43 mm in diameter which is not overly large, except that the thin bezel makes it appear bigger than it actually is, a phenomenon that is common in pretty much all watches. And so, when it was on my wrist, it asked myself whether it is more of a dress watch or a sports watch. To me, it is a little of both. And with that said, I think a less tapered strap could really do wonders for this watch. After all, the 15.5 mm height is quite thick so a wider, and possibly thicker strap could even out the proportions a bit.

The length lug-to-lug is 51 mm with an interlug width of 21 mm. Total weight is 117.2 grams including the leather strap.

Alternating satin brushing and full polishing on the case and lugs results in a nice luxurious appearance.

Even the crown – which is a push-in design and measures 6.5 mm in diameter – has a lot of detail, with an embossed “M” emblazoned in a polished finish set against a satin surface, and a flared ridged design for easier manipulation when you are adjusting the time or winding the watch manually. The rest of the functionality is controlled by three recessed pushers.

The strap is made with black alligator skin and a two-button steel safety clasp that features a nice mixture of polished and satin surfaces and is emblazoned with the Maurice Lacroix logo. Water-resistance is 50 meters. The retail price is $5,000. (Ref. MP6528-SS001-330-1)

Maurice Lacroix offers a wide variety of watches, including quartz, however, mechanical retrograde timepieces are one of their specialties. And while in an ideal world I would love if the case was a bit sleeker, they have done a good job. And the movement, although not haute horology level, adds value to the timepiece and is worthy of its sapphire caseback. Moreover, the sunburst brushed dial in dark gray or blue contrasted with rhodium-plated hands and markers – is exquisite.