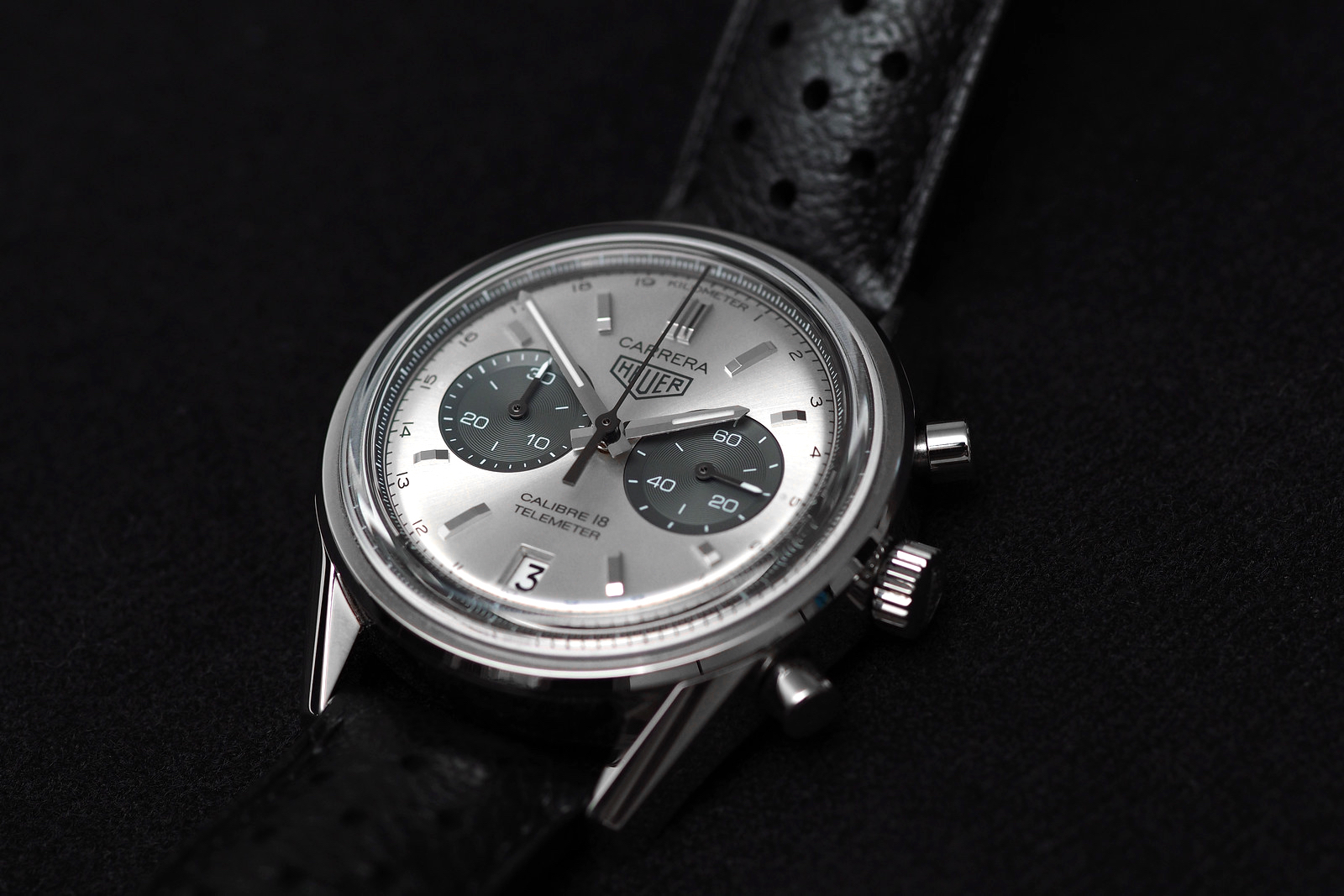 TAG Heuer debuted an interesting retro chronograph at Baselworld 2015, called the Carrera Calibre 18. Largely inspired by a historic “Heuer” model designed by Jack Heuer in the 1950s, it is sure to appeal to those looking for vintage styling in a modern timepiece.

The Carrera Calibre 18 has a silver sunburst dial with a dual register layout. On the left is a 30-minute chronograph counter, and on the right is a continuous small seconds display – both decorated with an anthracite azurage finish. The original dial was white with black counters, and the look is reminiscent. Although, the modern version has a convex surface, unlike the flat dial of its predecessor.

A printed telemeter scale on the outer chapter ring was included instead of a tachymeter. The telemeter scale allows the wearer to measure the distance of something that can be seen and heard. For example, when you see a flash of lightning, if you start the chrono, and then when you hear the crack of the thunder, you stop it, the chronograph seconds hand, in combination with the scale, will let you calculate the approximate distance in kilometers from the storm. Historically, this function was very useful in the military for measuring the distance of artillery fire.

Polished and faceted hour and minute hands with luminescent markers indicate the time, along with a running seconds counter at 3 o’clock, which has a darkened hand with a white tip. Minutes are designated by a printed scale on the flange. The 30-minute chronograph counter also has a darkened hand and white tip, which works in conjunction with the central chronograph seconds hand, also in a darkened finish. Notably, the telemeter scale takes up enough space on the dial that the designers had to move the hour markers inward towards the center quite a bit. It is not a fatal flaw, but in my opinion, aesthetically, it would have been better not to push the markers in so far. The date is displayed through an aperture at 6, whereas the inspiration piece omitted it altogether.

Uniquely, there is a printed vintage “HEUER” shield logo on the dial, something used by TAG Heuer in recent years, but not very often. This is, of course, great, as it pays homage to the brand’s roots, from when they were just Heuer.

The case is true to the original, which at 39 mm, is slightly larger (36 mm on the vintage piece), but regardless of the size change the shape stayed virtually the same, including the straight lugs. This is a good size, especially for purists looking for a smaller diameter case that wears like a vintage watch. With strap, it weighs only 92.5 grams, which makes it more comfortable to wear than a heavier watch and further enhances its retro characteristics, as most vintage watches are very lighter than their modern counterparts. By my measurements, the case is approximately 38.5 mm in diameter by 13.6 mm thick and 47.10 mm long, with a lug width of 18 mm.

Every component of the stainless steel case is polished: the middle case, lugs, caseback, fixed bezel, chronograph push-buttons, including the crown which has a raised and polished “Heuer” shield emblem.

Protecting the dial is a scratch-resistant box-type sapphire crystal with double anti-reflective treatment. While not made of plexiglass like its predecessor, it has the same look but with the advantage of being a modern, premium sapphire glass that is highly scratch resistant. A particularly nice feature, in my opinion. The water-resistance rating is 100 meters.

TAG Heuer Carrera Calibre 18, as the name suggests, is powered by caliber 18, which is an automatic Sellita SW300 movement with a Dubois-Depraz 2223 chronograph module added on. It beats at 4Hz (28,800 vph), with 37 jewels, and a 40-hour power reserve. The movement is visible through a sapphire caseback, including the oscillating weight which is engraved with the “Heuer” logo and decorated with a Côtes de Genève striped motif.

In conclusion, TAG Heuer has done a lot of things right with this timepiece. I love the box sapphire crystal, dual register layout, and retro styling. Furthermore, it has been well received by most people I have spoken with. Having said that, if they make some minor adjustments, such as moving the hour markers outwards towards the perimeter of the dial, and add one of their in-house chronograph calibers, I think the timepiece will be even more compelling.