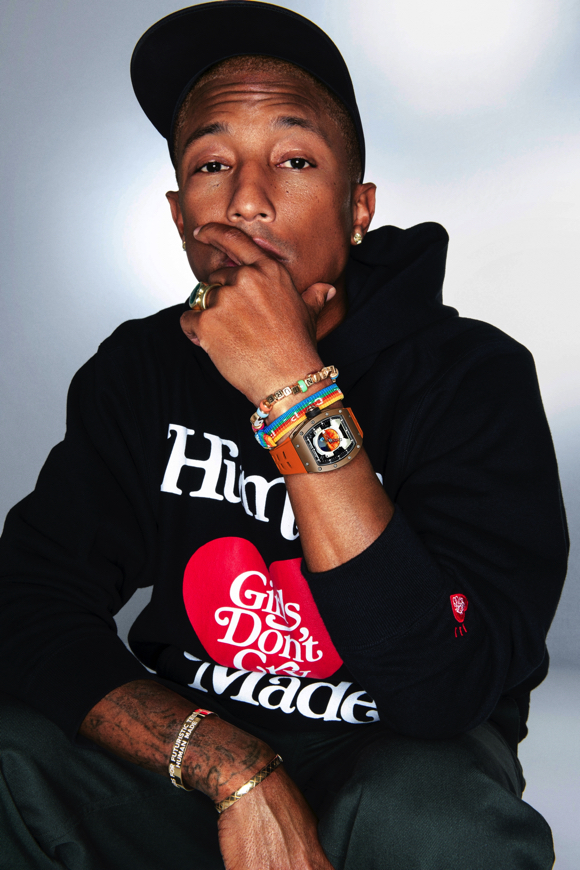 Pharrell has long been a friend of Richard Mille and so the two decided to collaborate and the idea for the astronaut on the dial came from Pharrell who said, “I’ve always been fascinated by looking up at the sky. What could be more inspiring than all that ever was and all that ever will be? Space, before your eyes. It’s yours to see. It was here before the Earth, before this Solar System. It’ll be here after us and nothing’s more meaningful than that. When I look up at the sky I’m looking at God. I feel part of so many different parts of a whole. This is the Alpha and the Omega.”

The dial depicts an astronaut on Mars with Earth in the reflection of the visor. Each dial is first hand-engraved with the basic outline of the scene, then hand-painted using layers of, in a way similar to grand feu but different in that the orange to red and blue to black gradients were made by superimposing layers and increasing the number of firings at 850 °C. In addition to the enameller and engravers, a painter airbrushed details such as the spacesuit, which is composed of grade 5 titanium and painted white.

On the helmet, two white gold elements containing a black sapphire and two diamonds evoke the floodlights that light up our immediate surroundings.

The watch case has Richard Mille’s signature tonneau shape and is presented in brown Cermet which combines the lightness of titanium with the hardness of a ceramic. It consists of a metallic zirconium matrix associated with high-performance ceramic that gives the material its brown hue with metallic reflections. The caseband is made of Carbon TPT®.

Both the hands on the dial side and the bridges on the caseback have been skeletonized and were made to evoke the rocket launch platforms or satellite arms. The crown is based on the design of a rocket capsule, and the rubber surrounding it features the profile of a Martian rover tire. Surrounding the bridges are large inserts in blue aventurine glass that fittingly look like outer space.

The Tourbillon Pharrell Williams RM 52-05 retails for $969,000 and is limited to 30 pieces. Learn more at Richard Mille.