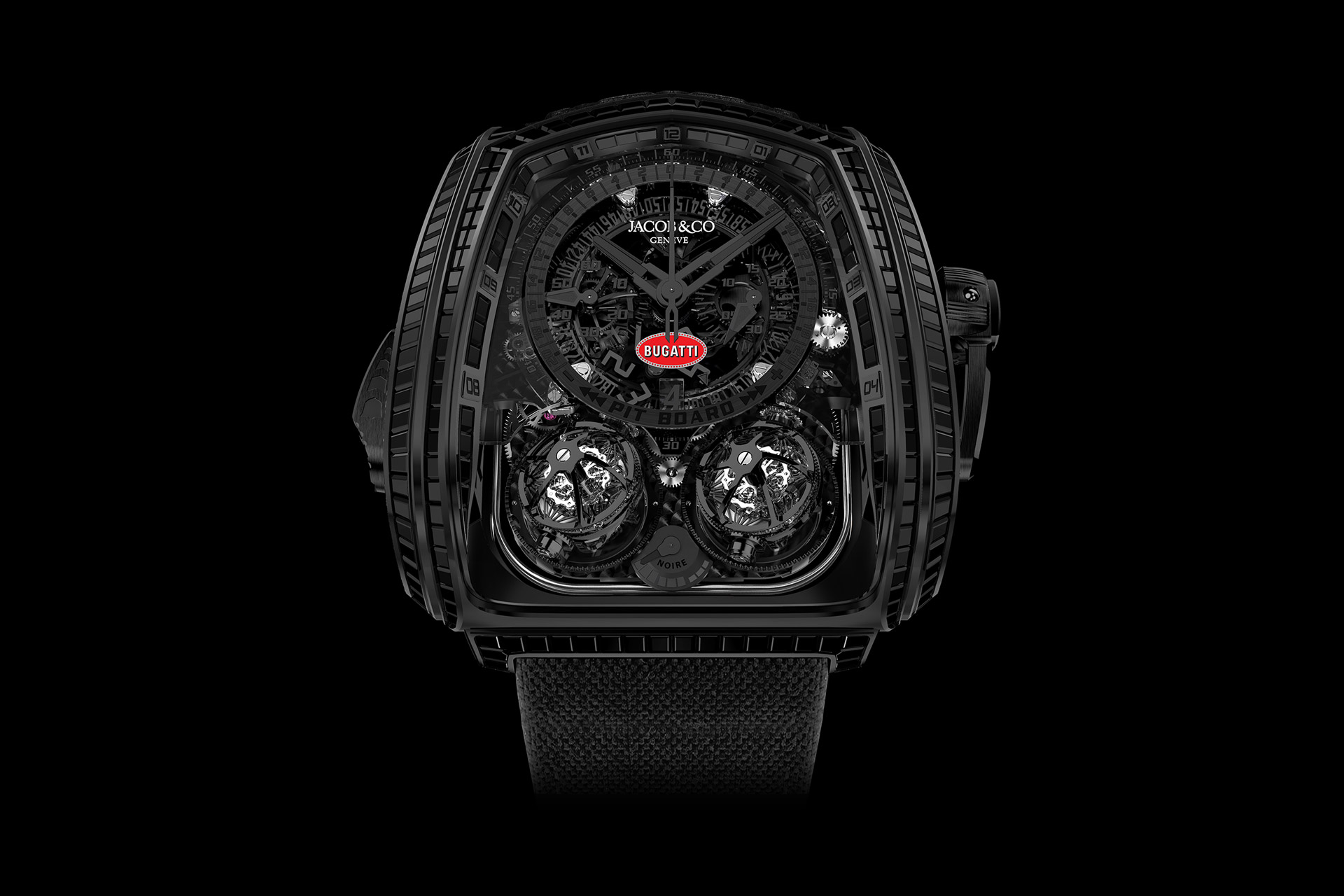 Jacob & Co stands out in the watch world, particularly for its outsized timepieces — powered by visually impressive high horology movements — that are often adorned with jewels.

The watch company recently signed an ongoing partnership agreement with supercar maker Bugatti, after the longstanding co-branding agreement with Parmigiani Fleurier ended, and is producing a collection of timepieces inspired by the carmaker.

A number of Jacob & Co x Bugatti timepieces have already been produced, and while the Bugatti Chiron Tourbillon is the most car-like timepiece of the bunch so far — and impressively so — it’s the Twin Turbo Furious La Montre Noire Bugatti that’s the most menacing. Ultimately, the movement designers of the original Twin Turbo Furious had a lot of space to work with compared to traditional wristwatches, and so they went crazy it seems.

Clad in all black, the massive 52 mm diameter by 17 mm thick case is crafted from 18K black gold, with 344 baguette-cut natural black sapphires surrounding the case and holds dual triple-axis high-speed tourbillons, rotating at varying speeds, and interconnected to which stabilizes the entire system by the two tourbillons compensating each other. The result is quite eye-catching.

The Jacob & Co. manually wound caliber JCFM05 drives all functions, including the aforementioned double tourbillon system as well as a decimal minute repeater (which chimes hours, ten-minutes, and minutes), a sophisticated mono-pusher chronograph (single pusher embedded in the crown controls everything) actuated by a column-wheel and vertical clutch, a power reserve indicator (located right between the two tourbillons), and a fully skeletonized date display.

Uniquely, there’s a function called “reference time differential” that’s displayed by chronograph second hand and an auxiliary ring around the dial called “Pit Board” which can display the difference in minutes and seconds in comparison to the reference time when timing an event (is set by the second position on the crown and activated by the chronograph pusher for up a differential of up to 5 minutes and 59 seconds).

A total of 832 components make up the manually wound movement, which has a 50-hour power reserve. The side of the case reveals the crank which acts as the crown and makes hand-winding easier.

Bugatti created the one-of-a-kind La Voiture Noire hypercar in 2019 and sold it to an unnamed buyer for almost $13 million dollars. That car was loosely based on the black car which is the mythical “La Voiture Noire” Type 57 SC Atlantic Coupe (pictured), that disappeared from Jean Bugatti’s collection around 1938.

The name “La Montre Noire” which translates to “the black watch” is a reference to “the black car” which both the 2019 car and 2020 watch pay tribute to. The black color scheme from both the 1938 and 2019 cars, inspired the creation of this unique watch, which like the car — is in a class of its own.

The Twin Turbo Furious “La Montre Noire” Bugatti is a unique piece and is delivered with a black Cordura textile strap and a black PVD plated titanium clasp with 18 additional black sapphires. The retail price is $1,000,000. (Ref. TT800.31.AA.UA.A)