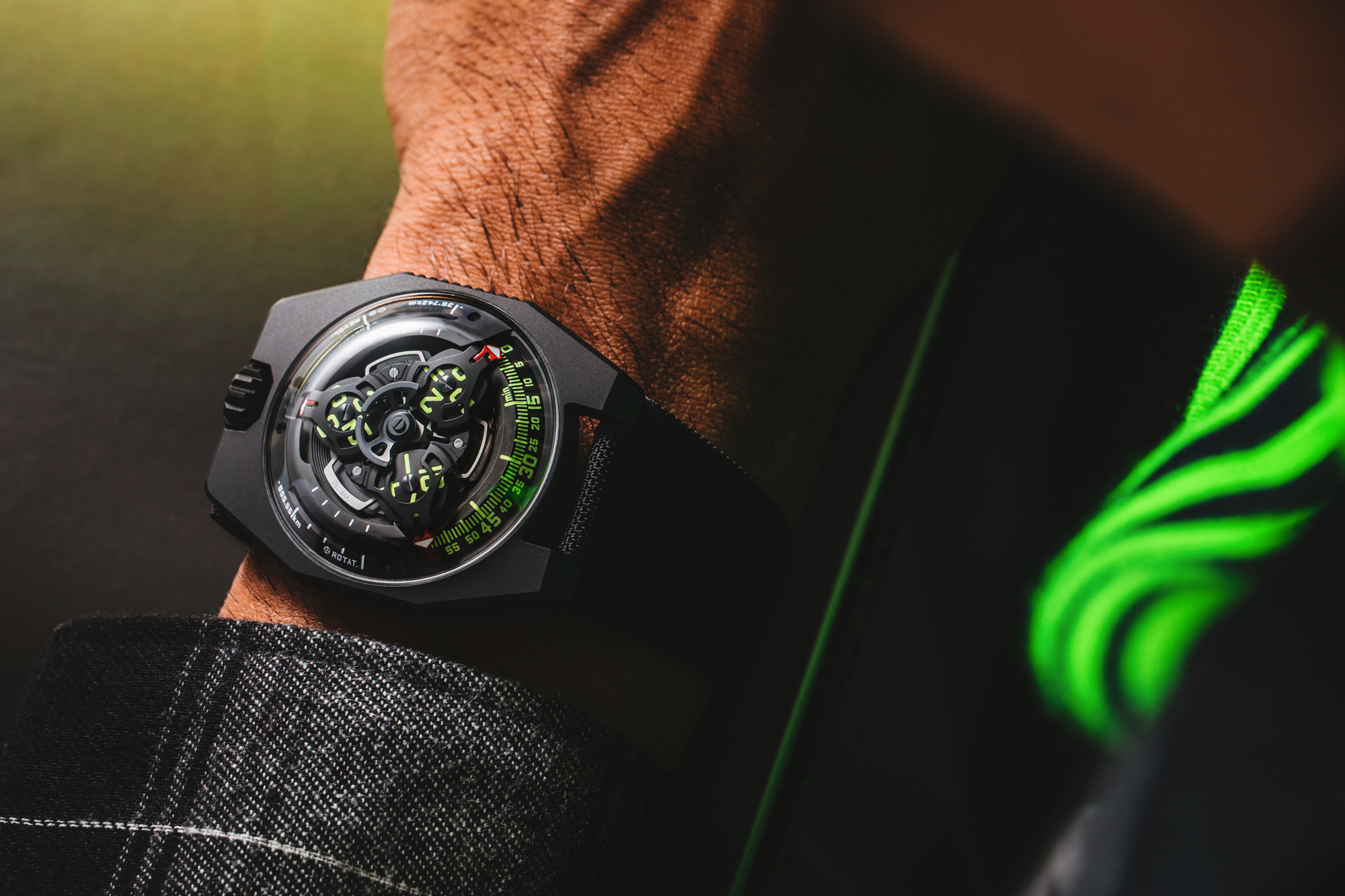 Yesterday, Urwerk debuted their latest timepiece — the smallest and most wearable timepiece they’ve ever offered — the UR-100 Spacetime.

At 41mm in diameter by 14 mm in thickness and 49.7 mm in length the case dimensions are much closer to a round watch than most Urwerk timepieces, nevertheless, they still were able to design a timepiece with an aesthetic that’s unmistakably Urwerk. The materials are also traditional Urwerk with a mixture of titanium, steel, and matte brushed finishes for one model and titanium, steel, and matte black PVD for the other.

Peering through the highly domed sapphire crystal you will also see Urwerk’s familiar orbital satellites that display hours. For minutes, there’s a retrograde hand, however, instead of the red arrow-tipped 60-minutes hand disappearing at the end of the retrograde arc, it passes underneath and between the subsidiary dials, reappearing to display two new astronomical indications: distance traveled on Earth and distance travel by Earth (around the Sun).

The first indicator at 10 o’clock evaluates the distance in kilometers that we have traveled on the Earth. It’s based on the average speed of the rotation of the Earth on its axis at the equator, covering a distance of 555 km every 20 minutes. On the other side of the dial, at 2 o’clock, the same hand continues on to show the distance the Earth has traveled in its orbit around the sun, which is 35,740 km every 20 minutes.

Powering the UR-100 SpaceTime is caliber 12.01, with an automatic winding rotor that’s regulated by a flat turbine, referred to as a Windfäng (Swiss German for “air trap”) that minimizes shocks to the rotor bearing and reduces over-winding and wear and tear. The rotor, which is partially supported on its periphery by the flat turbine, has a large diameter, resulting in a lower mass and therefore less wear.

The watch beats at a rate of 4Hz, has 39 jewels, and a 48-hour power reserve. The orbital satellite hours turn on Geneva crosses in beryllium bronze, with an open-worked aluminum carousel, and triple baseplates in ARCAP. The components have been finished with circular graining, sanding, brushing, and chamfered screw heads.

The shape of the case may remind Urwerk fans of the aesthetics of the brand’s early watches. As Martin Frei explains, “Towards the end of the ’90s, we unveiled the UR-101 and UR-102, the UR-100 is a little like our ‘Back to the Future.’ We broke down our approach and used some of the original design elements of our early constructions. The case of the UR-100 is a deconstruction of an early Urwerk case. The steel dome of our historic models is reproduced in sapphire crystal. The form is emphasized by the titanium and steel case. I constantly question the diktat of symmetry and played with proportions to catch the eye.”

According to Urwerk, the UR-100 was inspired by a 19th-century pendulum clock that was a gift to co-founder and master watchmaker Felix Baumgartner, from his father Geri, a now-retired renowned clock restorer — made by Gustave Sandoz for the 1893 World’s Fair in Chicago.

“The regulator-style dial does not show time. Instead, it shows the distance of the Earth’s rotation at the equator. The extra-long pendulum beats every 2.16 seconds, making every oscillation one kilometer. The main dial has a scale of 10,000 kilometers, shown in units of 100 kilometers so that each tick (half oscillation) indicates 500 meters traveled on the Earth’s surface (at the equator). The top subdial (10 km) is divided into 10 units, while the lower subdial showing a total of 40,000 km — approximately the equatorial circumference of the Earth — is divided into increments of 1,000 km.”