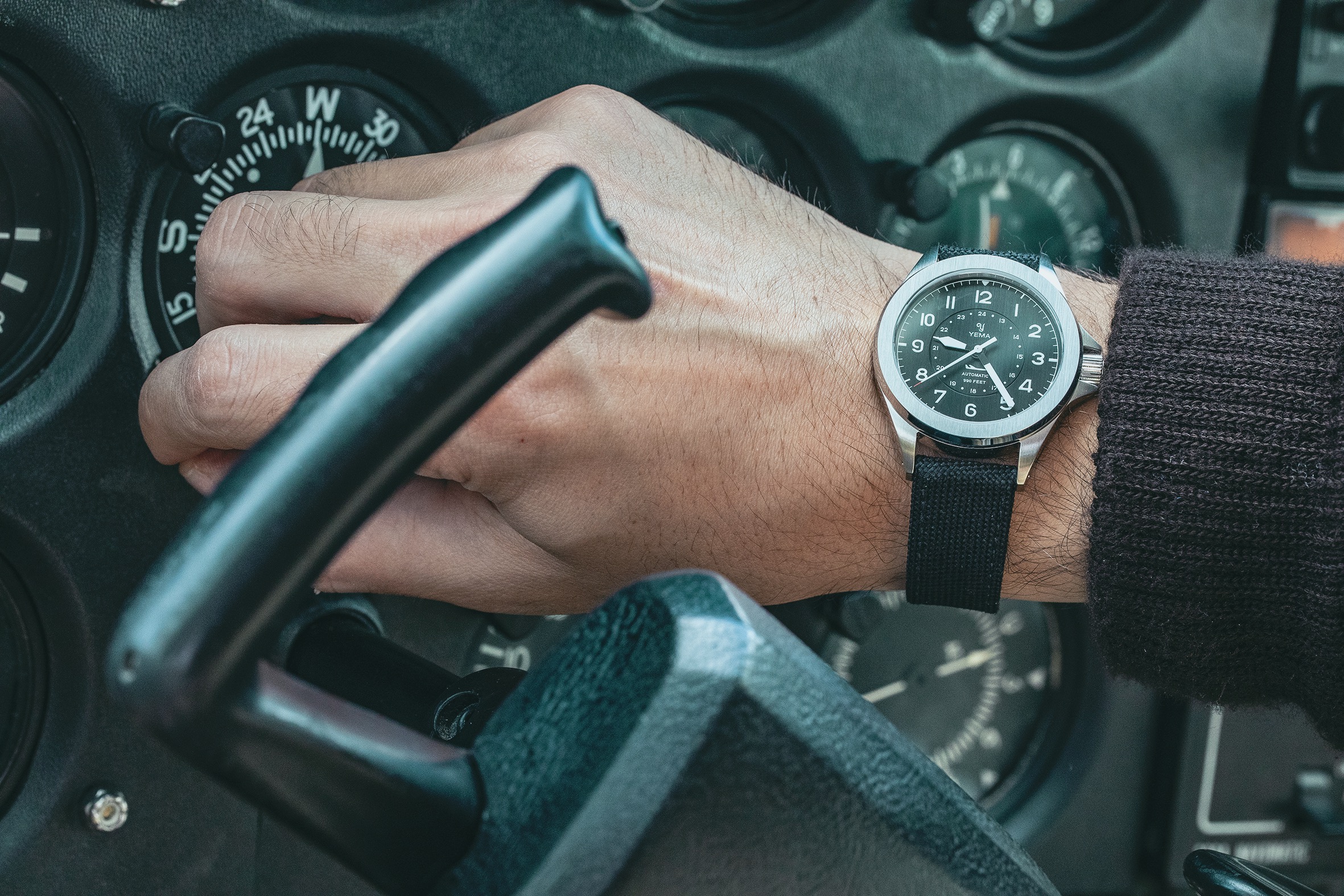 French watchmaker Yema’s latest timepiece, the Flygraf Pilot, launches today and will be available for sale in early July.

Delivered in a 39 mm stainless steel Pilot’s case with the prominent crown guards, the timepiece has the Yema’s signature look, at a more affordable price than some of their recent releases.

Offered in two versions, the Flygraf Pilot M1 with a black matte dial and the Flygraf Pilot M2 in a gray matte dial, each version is available with either a black canvas textile strap or black vintage leather strap. The case has a vertical finish of the top of the fixed bezel, lugs, and crown guards — with polished details around the bezel edge, on the crown, and the caseback.

The dial features a vertically brushed surface with printed white Arabic numeral hour markers, a white open chapter ring, white printed inner 24-hour ring so military time can be quickly read via the main centrally-mounted white Sword-shaped hour, white baton-shaped minute hand, and white needle-shaped red-tipped second hand. And as you can see below, practically everything on the dial is luminescent — even the seconds hand and the airplane motif at 6.

As the dial states the watches are made in “France.” Further, according to Yema the Flygraf Pilot is equipped with a French-made in-house movement caliber MBP1000.

The French-made 4Hz automatic caliber MBP1000 is 4.6 mm thick with 31 jewels and a 45-hour power reserve. The rotor is decorated with a striped decoration and winds the watch is both directions. Interestingly, both the mainplate and the bridges are embellished with a perlage finish, whereas traditionally the mainplate receives this treatment.

Nevertheless, the company’s workshop is based in Morteau, France, in a secluded valley in the Jura mountains just a few miles away from Switzerland’s La Chaux-de-Fonds.

The Yema Flygraf Pilot collection comes with a sapphire crystal, locking crown, solid screwed caseback, and has a water-resistance rating of 300 meters. Pierced lugs provide easy access to remove and change the strap.

Quite a bit cheaper than the Superman French Air Force Limited Edition, the Yema Flygraf Pilot M1 and M2 will retail for $690 on July 6, 2020.