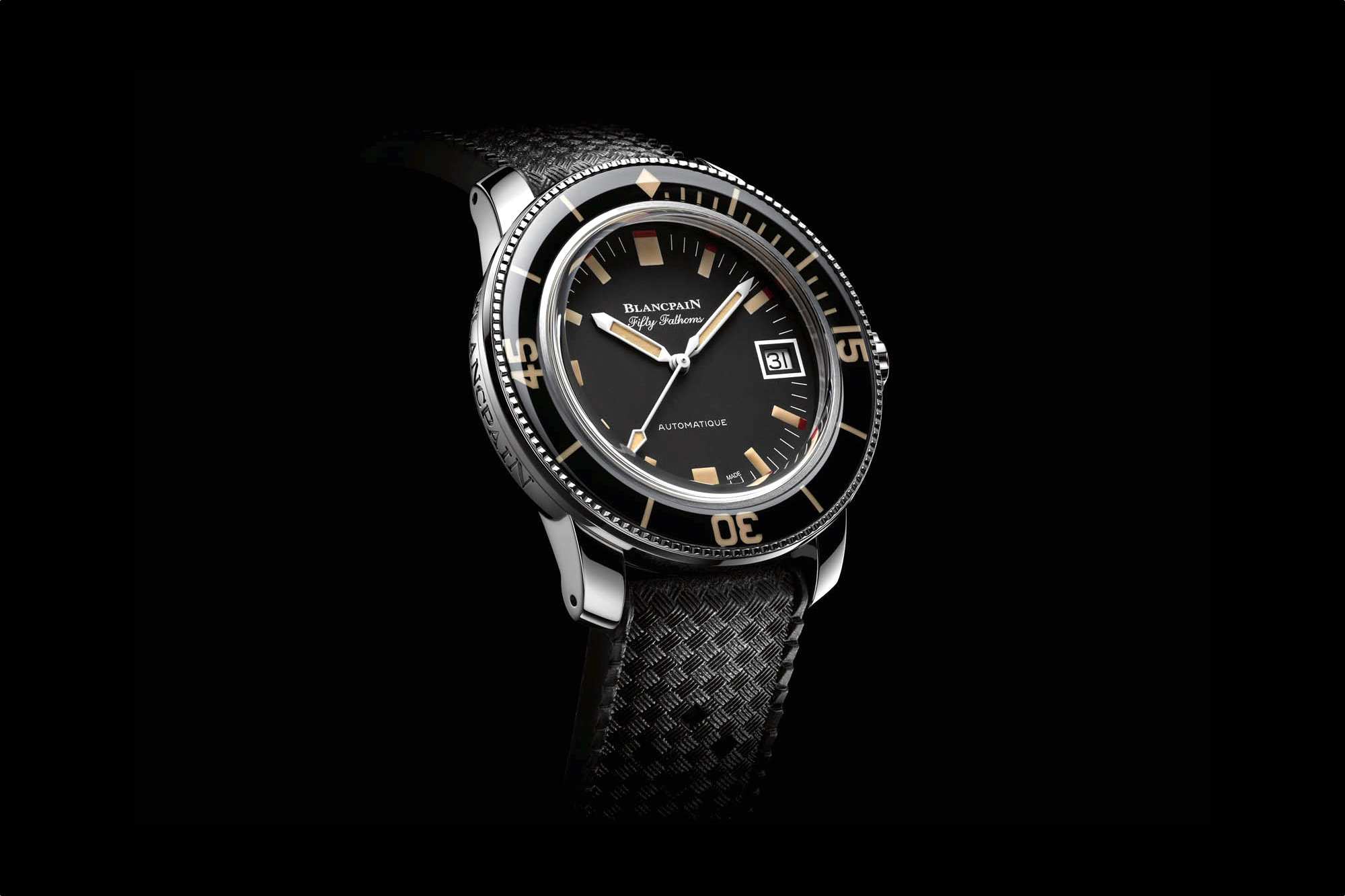 Blancpain created the Fifty Fathoms in 1953, the same year Rolex released the Submariner.

At the time, the Fifty Fathoms watches were more utilitarian than they are today, designed by French navy diver (Bob Maloubier) for military water use. The original Fifty Fathoms had a unidirectional bezel capable of tracking dive time, a screw-down crown, and a luminous dial that could be easily read underwater. These are the hallmarks of true dive watches today.

The “fathom” unit of measurement, is 6 feet, and so Fifty Fathoms is equal 300 feet, which is about the maximum a scuba diver can go. The world scuba diving record is currently 1,089 feet, set in 2014, according to Wikipedia. But generally speaking, 330 feet is the maximum depth, and that’s really only reserved for the very best divers, hence the name of the watch.

While the original Fifty Fathoms were utilitarian – built for professional use – and they still can be considered this theoretically, in reality, they’re more of a luxury dive watch. Considering the price, about twice that of a Rolex Submariner, there are so many other options for actual scuba diving. And with a clear caseback, which is awesome to view the movement, if you saw a serious diver wearing this to go scuba diving, I think it would be an exception, not the norm.

Don’t get me wrong, they have a strong naval heritage, in fact, this particular “Barakuda” limited edition, which is a throwback to a 1960s model, was originally produced by a company called a military supply company called Barakuda for the American, French, German, and Polish naval use, but that was before Blancpain went out of business, prior to being resurrected and brought back by the Swatch Group. The new modern Blancpain 2.0, is more about expensive limited editions and luxury than diving, despite the pedigree.

Personally, I’ve always found the luxury angle Blancpain has taken, and the classical, dressy Villeret timepieces to be out of place for such a brand. But I’m sure they know their customer, which I believe is not a US customer, and so they produce their assortment accordingly. I think the constant Chinese limited editions are a giveaway to who their primary client is.

Nonetheless, the sporty Fifty Fathoms dive watches are what people in the United States I’ve spoken with tend to favor. This 500-piece limited edition is a nice step towards the watches that I’ve always thought were the most appealing from the brand, even if a bit overpriced. For reference, Phillips sold a 1970 Blancpain Fifty Fathoms Barakuda in May 2018 for CHF 16,250.

Not that long ago, I recall when the Blancpain Baselworld releases were dominated by Fifty Fathoms watches. With the trend in watches heavily shifting towards casual, maybe we’ll see more of these sporty stell watches and less of the dressy gold Villerets.

Under the dial is a Frederic Piguet caliber 1151, which is the factory purchased by the Swatch Group, based in Le Brassus, that eventually became the Blancpain manufacture.

The automatic, 3Hz, 28-jewel, 210 component movement measures 27.40 mm x 3.25 mm and has the traditional Swiss look with a rhodium-plated mainplate and bridges, with perlage on the mainplate, and Geneve stripes and beveled/polished edges on the bridges, along with polished screw heads. And while this automatic caliber has all of these accouterments, and a premium 18K central rotor that winds the double-barrel mainsprings up to an impressive 95-hours, the single-arm balance bridge, and more pedestrian index regulated balance system, are somewhat underwhelming for this price range. Especially when you can get a Rolex with a proper traversing balance bridge (more robust, which is useful for a professional scuba watch, or any sports watch, and a free-sprung balance wheel which is almost exclusively seen on higher-end watches, for about half the price. That said, the Submariner’s caliber 3130 movement has a power reserve of only 48-hours, although that’s something they’ll likely rectify by upgrading to 70-hours in the near future, as seen in many of their other sports models.

This watch is considered a reissue, but not a 1:1 remake. The block-shaped hour markers are longer now, the lugs are shorter and wider, and the bezel is sapphire. Still, the modern version has a very similar look to the original, right down to the faux patinated lume.

The watch also has a distinctive date window, that remained intact from the original, and the like most modern Fifty Fathoms watches, the water-resistance rating is 300 meters, not 100 meters (which is fifty fathoms).

A sapphire crystal bezel insert is standard and has been used since 2003 on true Fifty Fathoms watches, it should be noted that the more angularly shaped Fifty Fathom Bathyscaphe models have a ceramic bezel insert, not sapphire.