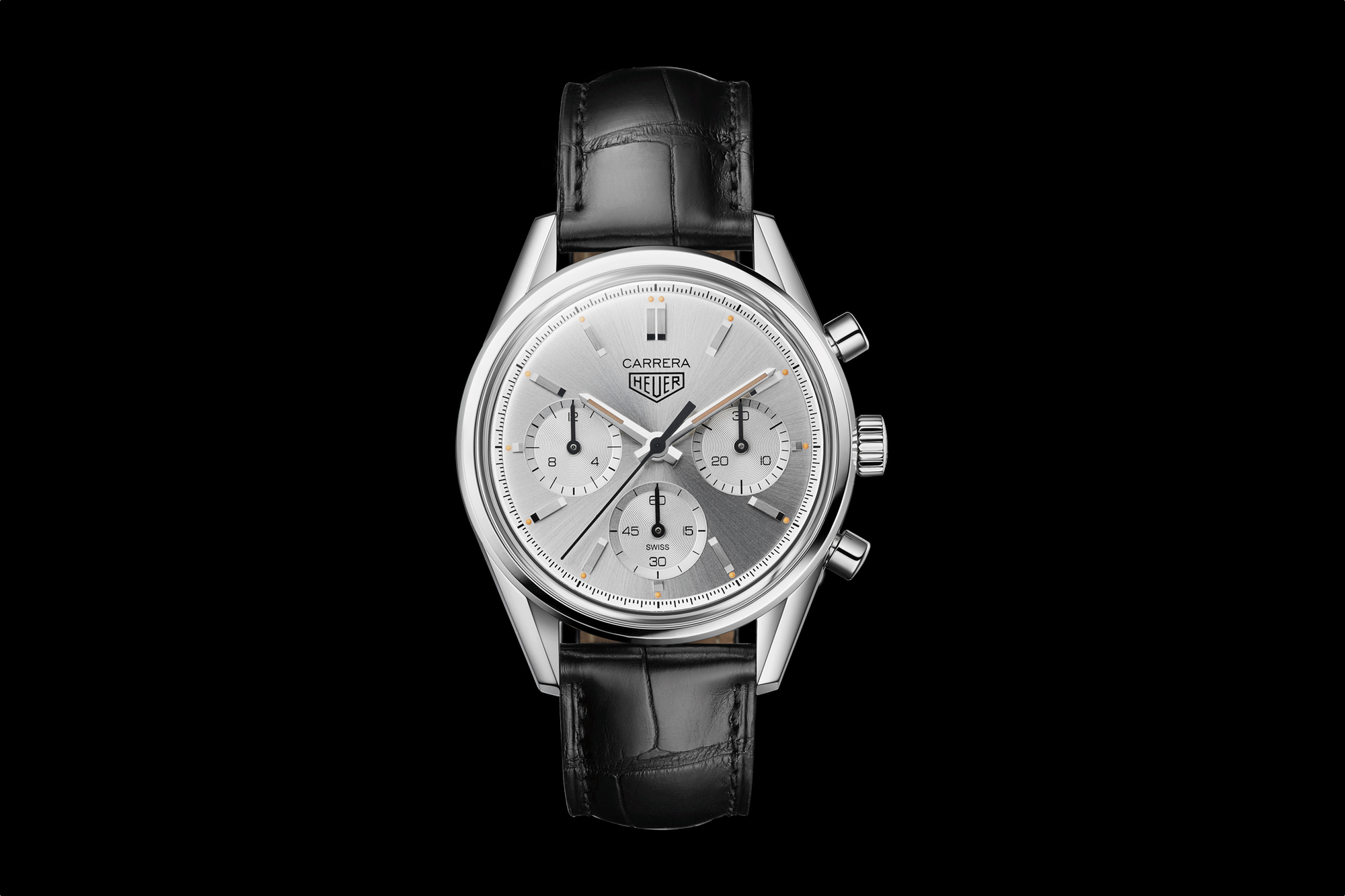 Today, TAG Heuer announced a new watch called the Carrera Silver Limited Edition Ref. CBK221B, which is a re-edition of a 2447S chronograph the company produced in 1964.

The original was housed in a 36 mm case but like the 2016 Carrera re-edition we reviewed here, this contemporary remake comes in a slightly larger 39 mm diameter case. Unlike the 2016 Carrera re-edition, this new Carrera has an in-house movement, which is an upgrade over the Sellita SW300 movement with a Dubois-Depraz 2223 chronograph module added on.

Comparing the silver dial of the model from 1964 and the new version side-by-side, the resemblance is quite faithful, even down to having no date function. However, the small seconds counter is located at 9 o’clock on the vintage version because it’s powered by a Valjoux 72. The Heuer 02’s construction requires the small seconds subdial to be at 6 o’clock.

The Carrera Silver Limited Edition case has a fixed steel bezel, a box-type sapphire crystal, facetted rhodium-plated polished indices with a lume dot above each marker, and faceted rhodium-plated polished hands with aged lume. The three counters are sunken and have a circular azurage pattern that contrasts with the texture of silver sunray brushed dial. The minute/second track is printed in black on the slope of the flange. A black lacquered seconds hand and three subdial hands stand out nicely against the mostly monochrome dial, as does the vintage Carrera name and HEUER shield printed in black at 12 o’clock.

Underneath the dial is TAG Heuer’s 33-jewel automatic caliber Heuer 02 chronograph which beats at 4Hz and has an 80-hour power reserve. The start/stop/reset of the chronograph are actuated by a column-wheel and vertical clutch. Geneva stripes on the bridges and perlage on the mainplate give the movement a decorated aesthetic, however, the component edges do not appear to be chamfered or polished.

A transparent caseback and shows off the Heuer 02 components including the darkened skeletonized winding rotor that’s engraved with “160 YEARS OF AVANTE-GARDE” along with the TAG Heuer shield logo and a checked flag motif, paying homage to TAG Heuer’s birthday.

This is a limited edition of 1,860 pieces that will be available starting in June 2020. The retail price has not yet been determined although it’s worth noting that the retro Carrera model released in 2016 retailed for $5,450.

Editor’s note: TAG Heuer released a limited edition watch with the same movement and dial layout as this in 2018, in collaboration with Hiroshi Fujiwara of Fragment Design.