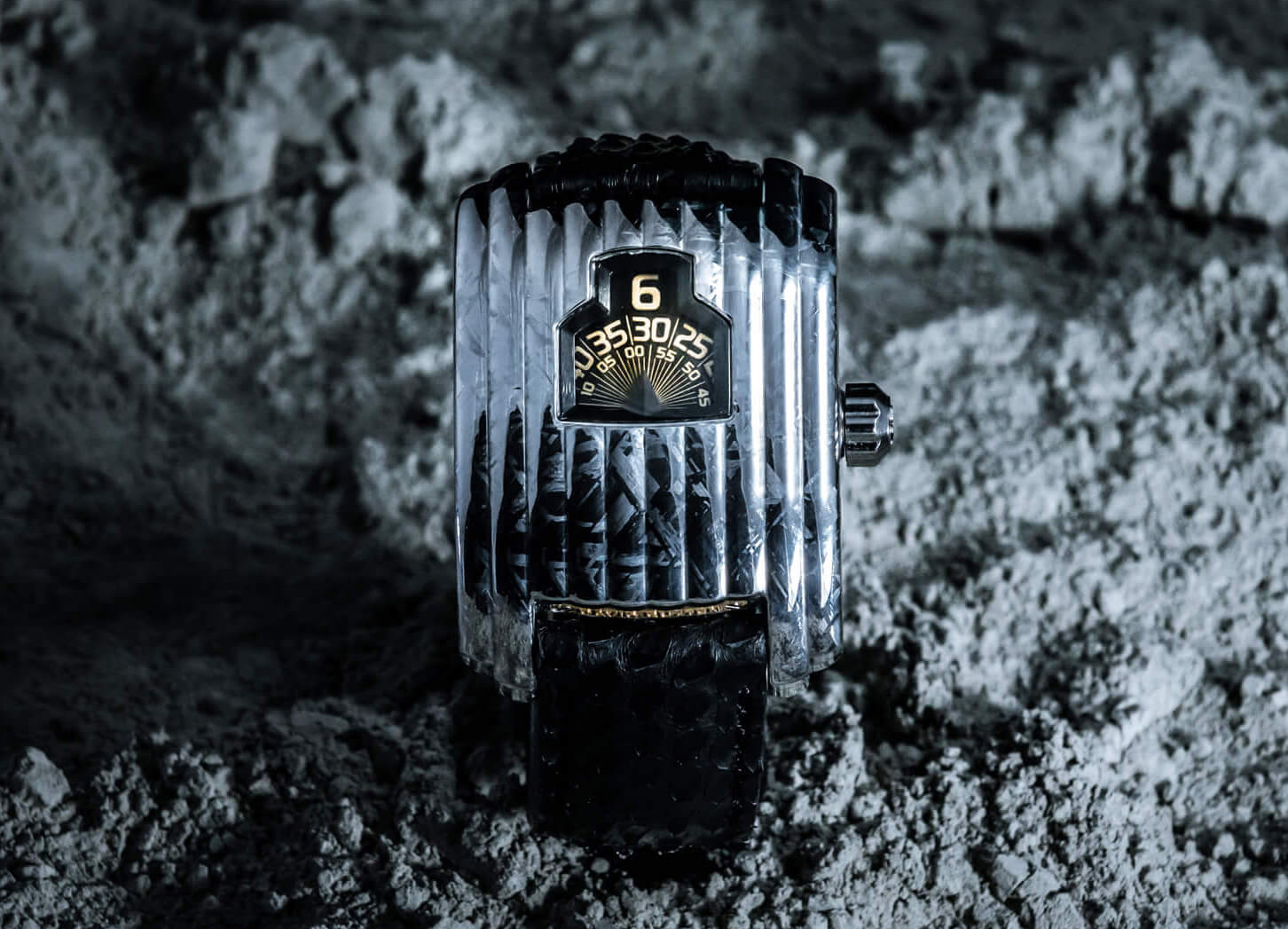 Belgian watch start-up, David Rutten, has produced an 88-piece limited edition watch with a case made of meteorite. More commonly, watchmakers make watches with meteorite dials, not the entire case.

In addition to the case material, this watch has a unique way of telling the time: via jumping hours, jumping minutes, and dragging seconds.

The bottom of the plate and the crown are made of polished titanium, which is hypoallergenic and helps to lighten the weight to 120 grams in total.

On the back you can see the movement which is referred to as caliber DR01 but has been outsourced. The round caliber features jumping-hours and measures 33.3 mm, by approximately 8mm thick. The hand-wound movement runs at 4Hz with a 120-hours power reserve. The bridges have a (dark) ruthenium treatment and feature machine made Geneva stripes, and cut-outs to see the mechanics underneath, such as the dual power barrels and oscillator with index regulator.

The company claims the jumping hour complication, which was developed by one of their partners, takes place without the preliminary clutch of the hour disc and causes no perceptible shaking, and you can it hear it jumping.

Every watch is unique and David cuts the blocks of meteorite himself before machining, in order to select the direction of the octahedron pattern. This step determines the final appearance of the watch. He also developed his own technique of polishing the meteorite in a way that results in the distinctive look you can see in the photos. On a first-come-first serve basis, customers will be given a choice of which one-of-a-kind case they want.

According to the company, “Using a telescope, you will be able to guess the area of origin of most of the meteorites used in our watches: the asteroid belt, between Mars and Jupiter, 320 million km away from Earth. The ultra-slow cooling of iron (about 90%) and nickel (about 9%), composing the extraterrestrial metal, created a unique pattern. Indeed, each watch will feature its own Widmanstätten array. The latter will have a different structure depending on the Streamline series, or the rule, even the vintage or the same meteorite. But some pieces will also feature cobalt inclusions, which anthracite finish amazingly contrasts with the near-white color of ferronickel. The cobalt is embedded within the substance in its liquid state but without merging with the rest, which is impossible to achieve in zero-gravity. Like bronze watches, bear in mind that the material will acquire a patina, making some patterns more visible, depending on the use of your watch, and continuing the life experience of the object.”

The case is likely the only of its kind on the market, and the shape and function look a lot like an Urwerk, albeit without an in-house movement, which should appeal to some customers considering it costs quite a bit less.