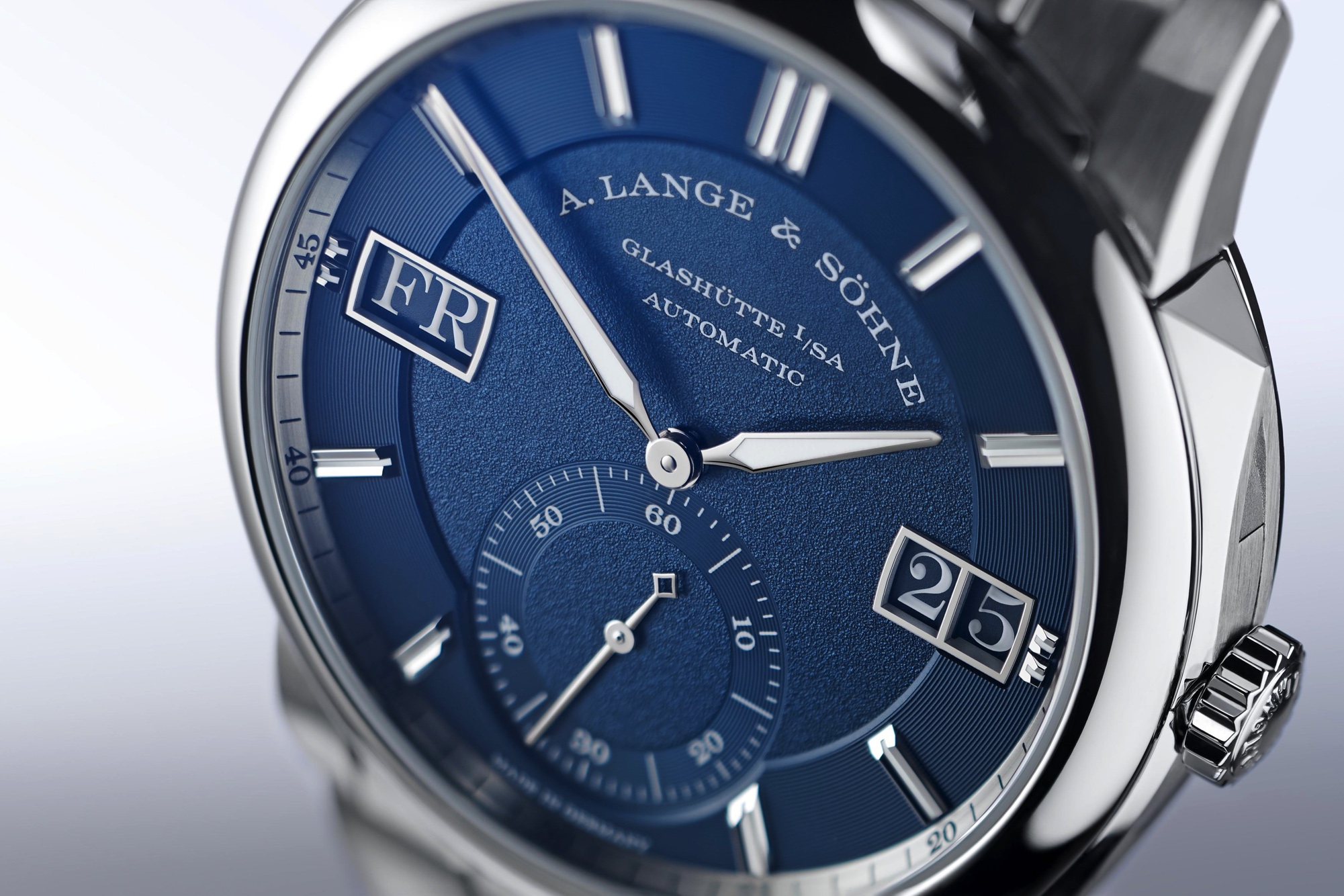 As fashion has changed over the years – from formal to more casual clothing – so to have wristwatch styles. This change has been quite profound and at some of the companies whose mantra has been to produce precious metal, dress watches – and that’s it – even they have to adapt.

After many years of planning and conceptualizing, the most formal, and perhaps proudest of German watchmakers, A. Lange & Söhne, has finally introduced a stainless steel sports watch: the Odysseus.

As the company’s press release states, “The Odysseus opens up a new chapter for A. Lange & Söhne.”

The new Odysseus is the first regularly produced timepiece in stainless steel from the Glashutte-based manufacture. It’s also the first sports watch the company has ever produced. I mean you can count the company’s incredible Datograph as having sporty looks, but it’s really a dress chronograph.

Presented in a 40.5 mm x 11.1 mm case with an integrated stainless steel bracelet, Lange calls the Odysseus a “sporty-elegant watch.” It’s not a dive watch but it does have 120 meters of water-resistance and a screw-down crown. The movement is also presumably very robustly built especially when you consider one design feature which I’ll discuss further in a moment.

Love the bracelet, or hate it, Lange has created an adjustable steel bracelet that in the context of modern fashion, is akin to the perfectly tailored clothing fits, and can be adjusted in small steps up to 7 millimeters by pressing the pusher embossed with the Lange signature on the bracelet at which point it can be pulled or pushed where it connects with the safety deployant clasp to adjust to the desired length, without needing to even open the buckle. More traditionally, if needed, the bracelet can also be extended by adding further links.

The dial is made of brass with different levels and surface finishes and comes exclusively in blue. The hour ring is raised above the rest of the dial and has a circular pattern called azurage, with white gold baton-shaped luminous indices hand-applied on top. Surrounding this ring is the argenté (silver) flange, set at a 45-degree angle, with a dark printed minute scale with 0-60 graduations, and a red marking for “60,” which denotes the sporty nature of this wristwatch, in a subtle way. Like the indices, the Lance-shaped hour and minute hands are made of white gold and feature luminous material, something that although not a first for Lange, is uncommon on their watches to date.

The centermost part of the dial features a grained surface, which is the same finish found on the center of the small seconds subdial, located at 6 o’clock. And similarly, like the main dial, the subdial features an outer ring with a pattern of concentric lines (also called azurage). Except, the subdial is reversed in that the azurage patterned ring in sunken and the center is raised. A small but sure to be appreciated detail from a watchmaker that’s all about the details.

Last but not least, what makes this a distinctly Lange dial, is the framed day and date displays. The so-called “outsized” day and date displays, which are similar to Lange’s famous patented adjacent dual-aperture outsize date display, have been ingeniously designed to be operated by toolless push buttons. That means all you have to do is push the button to set the day and date. No need to pull out the crown. So if you’re anything like me, and dislike setting the date via a crown, you’ll love how effortlessly these function.

Lange is probably best known for its movements and finishing. And they did not fail to deliver in that regard, with the new in-house developed caliber L155.1 Datomatic (“DATOMATIC” in the name, and on embossed on the rotor, refers to the date mechanism combined with automatic winding). The mainplate and bridges are manufactured from untreated German silver, with the total movement footprint measuring 32.9 mm x 6.2 mm, dimensions which crucially fill out the entire case, and make for a perfected view when peering through the screw-in sapphire caseback. In addition to the unidirectional winding skeletonized platinum rotor which has been matte black rhodium-plated and decorated with no less than three different types of finishes, which along with hand-winding via the crown, can wind the mainspring up to a maximum power reserve of 50-hours.

The movement runs at a higher beat of 4Hz compared to typical Lange movements, which should theoretically be more accurate than lower rate watches, which in turn helps maintain accuracy when taking part in more spirited activities than dressier Lange timepieces will likely ever see. The free-sprung balance wheel oscillates at 28,800 vibrations per hour, with four poising screws to adjust the rate, and utilizes a beat-adjustment system that’s shock-resistant (and includes whiplash protection).

Increasing a watch to a higher rate is not going to by itself make the watch movement more durable, the design of the balance bridge, which I alluded to above, though, does, in fact, enhance the ability for the watch to withstand sportier activities than the commonly used Lange balance cock. The reason is obvious: because the bridge traverses and has two contact points to secure it to the movement plate, whereas a balance cock has only one point of contact securing it to the baseplate. Thankfully, Lange did not sacrifice anything in regards to aesthetics as the bridge is still hand-engraved and signed by the artist who did the work. Further, a typical Lange hallmark, a screwed gold chaton secures the upper bearing jewel of the escape-wheel arbor.

The movement is also assembled twice, as are all Langes, which does not add any value per se. It does, however, say a lot about how the German watchmaker obsesses over every detail. And regardless of how many times the movement is put together, the Glashutte watchmakers will undoubtedly adjust the watch in every position and it will not leave the factory until the rate and amplitude are well above chronometer specifications.

In addition to the gorgeous untreated German silver, as I mentioned above, the finishes are of the highest level, as we’ve come to know from Lange. From Glashutte striping on the bridges to blued and polished screws to perlage on the mainplate, and skillfully hand chamfered and polished edges, this a Lange through and through.