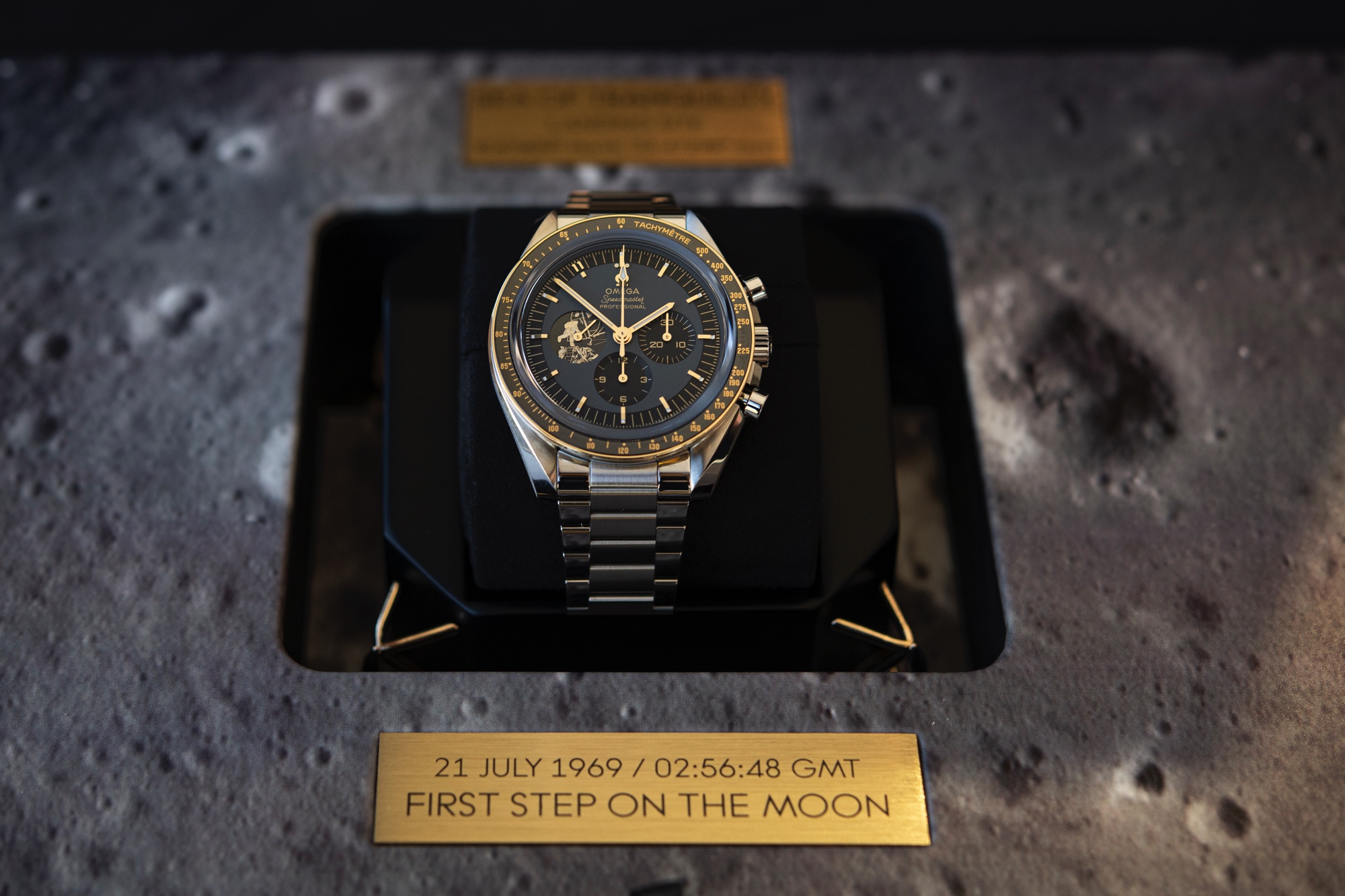 During this significant event in United States space exploration history, Neil Armstrong – who took his famous first step out of the lunar module onto the surface of the moon – left his NASA-certified Omega Speedmaster (Pre-Moon) Ref. 105.012 in the module, instead of on his wrist.

Following him, though, was Buzz Aldrin, who did, in fact, have his Omega Speedmaster 105.012 chronograph on his wrist. More precisely, he had it strapped to the wrist area, outside of his space suit, via a specially made, elongated velcro strap (pictured).

In doing so – the Speedmaster, which had already been in space, both officially and unofficially, and had been NASA-certified by this point – became the first watch worn on the moon. The reason this particular reference is referred to as a “pre-moon” is because its production began in 1966, well before the moon landing. However, due to its famous provenance, it went on to become the Omega Speedmaster Professional “Moonwatch.” And apart from the movement and some slight design variances, it’s still the same as what’s sold in Omega’s core watch collection to this day.

For the 2019 50th Anniversary Speedmaster Professional “Moonwatch” Apollo 11 Limited Edition, Omega created two 42 mm versions: one that comes in 18K yellow gold that we covered earlier in the year (limited to 1,014 numbered editions), and a second model in steel with gold accents and limit of 6,969 pieces (pictured).

The second model represents the watch that collectors had been anticipating most, and while the watch is a nice homage to the Apollo 11 Speedmaster, it has been met with mixed reactions. The areas of criticism we noticed were mostly focused on the use of gold on a steel watch, the depiction of Buzz Aldrin from a rearview, and the use of a new caliber 3861 instead of the historic caliber 321. Not to mention, the price is practically twice that of a normal steel Moonwatch.

However, despite these reservations, the number of steel Speedmasters made for the 50th Anniversary will likely not satisfy worldwide demand, so none of the aforementioned points really matter to the bottom line. In the long term, looking back, will collectors still be poking fun at the depiction of Aldrin’s rear end on the dial of the watch? Will it become the ultra-collectible Speedmaster that everyone wants and nobody can get like the Omega Speedmaster Apollo 13 Silver Snoopy? Perhaps. Time will tell. One thing’s for sure: wealthy Speedmaster collectors are going to want this.

Some of the details you get with this limited edition Speedmaster are definitely neat for the person who’s into Speedmasters, US space exploration, or both.

Unlike the standard Moonwatch, the bezel insert on the Apollo 11 is polished black ceramic [ZrO2] (versus black anodized aluminum). This makes it slightly more upscale and makes it more durable against scratching. The tachymeter scale is in Ceragold. The bezel ring itself is made of 18K polished Moonshine gold, which is an exclusive new patent-pending alloy which is a paler hue than traditional yellow gold and offers high resistance to fading over time.

On the blackened decorative inner caseback is a laser- engraved footprint representing humankind’s first step on the moon.

Encircling the image in 18K Moonshine gold-plated lettering is Neil Armstrong’s legendary quote: “THAT’S ONE SMALL STEP FOR A MAN, ONE GIANT LEAP FOR MANKIND”. Around the outermost edge of the caseback these words are engraved: APOLLO 11, 50th ANNIVERSARY, LIMITED EDITION, XXXX/6,969, NAIAD LOCK, Cal. 3861 and CO- AXIAL MASTER CHRONOMETER. (The Naiad lock is a patented function that keeps the caseback upright it the exact same position all the time.)

The watch is powered by the new Co-Axial Master Chronometer caliber 3861 which is an evolution of the current caliber 1861, and the original caliber 321. As mentioned above some collectors are disappointed that Omega did not utilize the recreated caliber 321, which has a premium column-wheel and vertical clutch chronograph configuration. And they do have a good point, especially considering the price of this watch. Although, the new caliber 3861 is still a nice upgrade compared to the 1861 in that it has superior anti-magnetic properties, uses a co-axial escapement, silicon balance spring, and has a free-sprung balance wheel, among other enhancements. Hopefully, this will be a standard movement for the Moonwatch line in the not too distant future. Read more about the caliber 3861 specifications here.

The dial features a varnished gray area surrounded by a contrasting outer blackened ring with gold graduations. The subdials are also black with gold highlights and markings. All of the hands and indices and the vintage logo are in 18K Moonshine gold, with the exception of the chronograph seconds hand which is PVD-plated Moonshine gold.

Uniquely, at 11 o’clock there are two “1” markings in 18K Moonshine gold, which represent the Apollo mission number. More notably, the 9 o’clock subdial features the famous image of Buzz Aldrin climbing down the ladder onto the lunar surface.

Crafted from 18K Moonshine gold, and located in the small seconds subdial at 9 o’clock, is a blackened and laser engraved image of Aldrin climbing out of the lunar module onto the moon.

This limited edition Moonwatch comes on a polished-brushed stainless steel vintage bracelet and clasp, which fittingly is inspired by the 4th generation Speedmaster (ST 105.012-65). An additional Velcro strap in blackened cork with golden marks is also included. According to Omega, “This design is a salute to the Apollo-era “boost protective cover” – a fiberglass structure covered with thick cork ablator which fitted over the Command Module like a glove, keeping the crew of the Saturn V rocket safe from the intense heat produced at launch.”