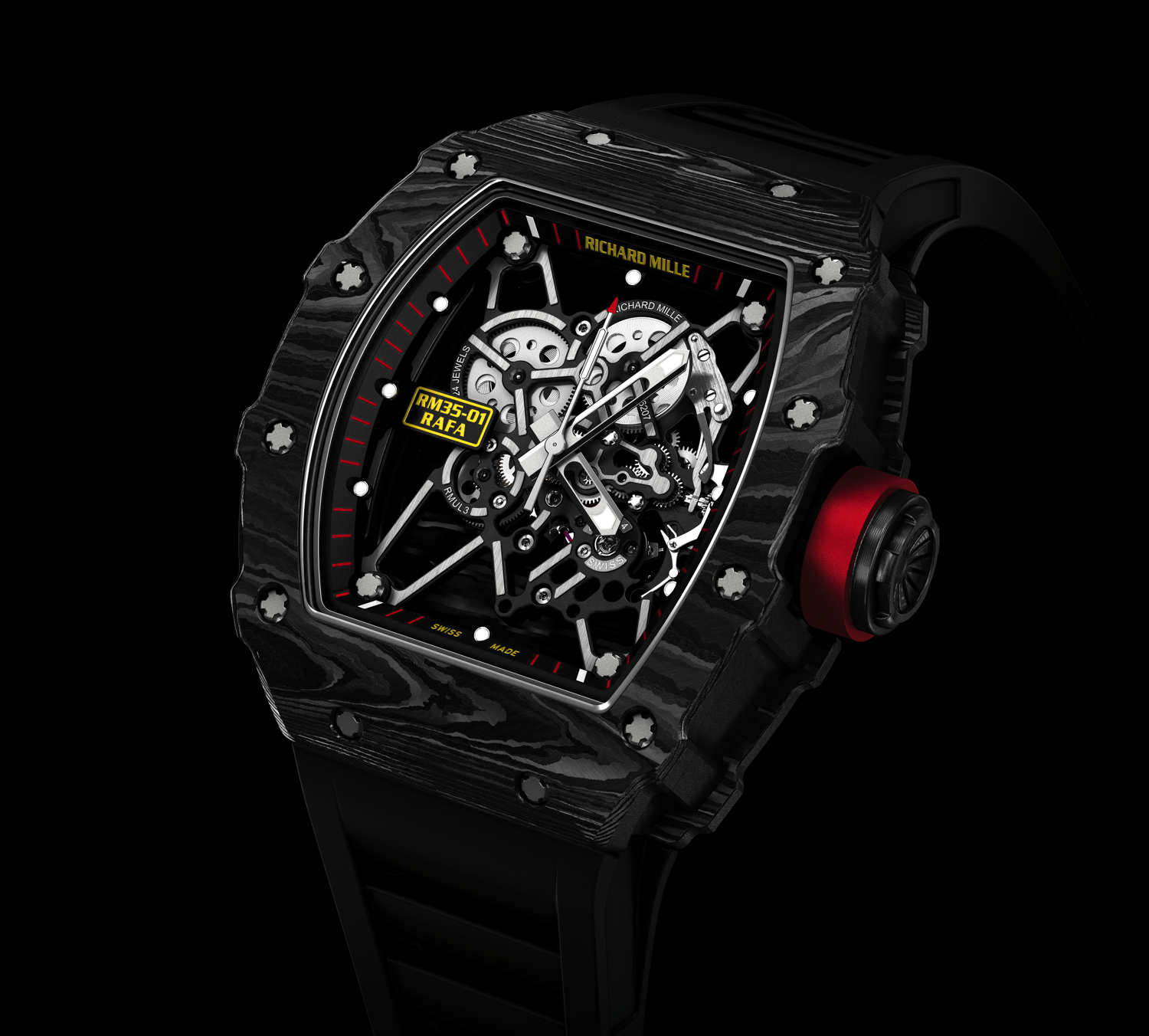 This is the new Rafael Nadal watch which was introduced last week at SIHH. It is the third timepiece custom-made for Nadal.

The last Nadal model, the RM 035 II, weighed in at only 20 grams with the strap, thanks to an ultra-light magnesium-aluminum alloy. The RM 35-01, features a new high-tech NTPT® carbon case (which measures 49.94 x 42 x 14.05 mm) and is said to have 25% less propensity of breaking, and a 200% lower rate of micro-cracks. However, it is unclear if it weighs more or less than the outgoing model. What was clear, is that the watch sits very comfortably on the wrist. Specifically, the curved NTPT® carbon caseback and overall contour of the watch to the wrist – result in an excellent fit.

According to Richard Mille SA, “NTPT® carbon is composed of multiple layers of parallel filaments obtained by dividing carbon fibers. These layers, with a maximum thickness of 30 microns, are impregnated with resin then woven on a special machine that modifies the direction of the weft by 45° between layers, creating this distinctive visual effect that is reminiscent of precious wood.”

The crown is also in NTPT® carbon with an O ring seal in Alcryn. The case features 20 spline screws in grand 5 titanium which permits better control of the torque applied to the screws during assembly. Basically, the screws are more durable during assembly and disassembly. The upper flange is in black carbon fiber, and the hour index points are filled with luminous material. The case of the RM 35-01 is water-resistant to 50 meters, ensured by two Nitril O-ring seals.

Powering the RM 35-01 is caliber RMUL3, which is a manually wound skeletonized movement with hour, minute, and second functions. It has 24 jewels and a 55-hour power reserve. A double-barrel system contributes to the torque stability over a longer period. This is achieved by dispersing the stored energy within two winding barrels, equalizing torque as well as reducing friction on the bearings and pivots resulting in improved long-term performance.