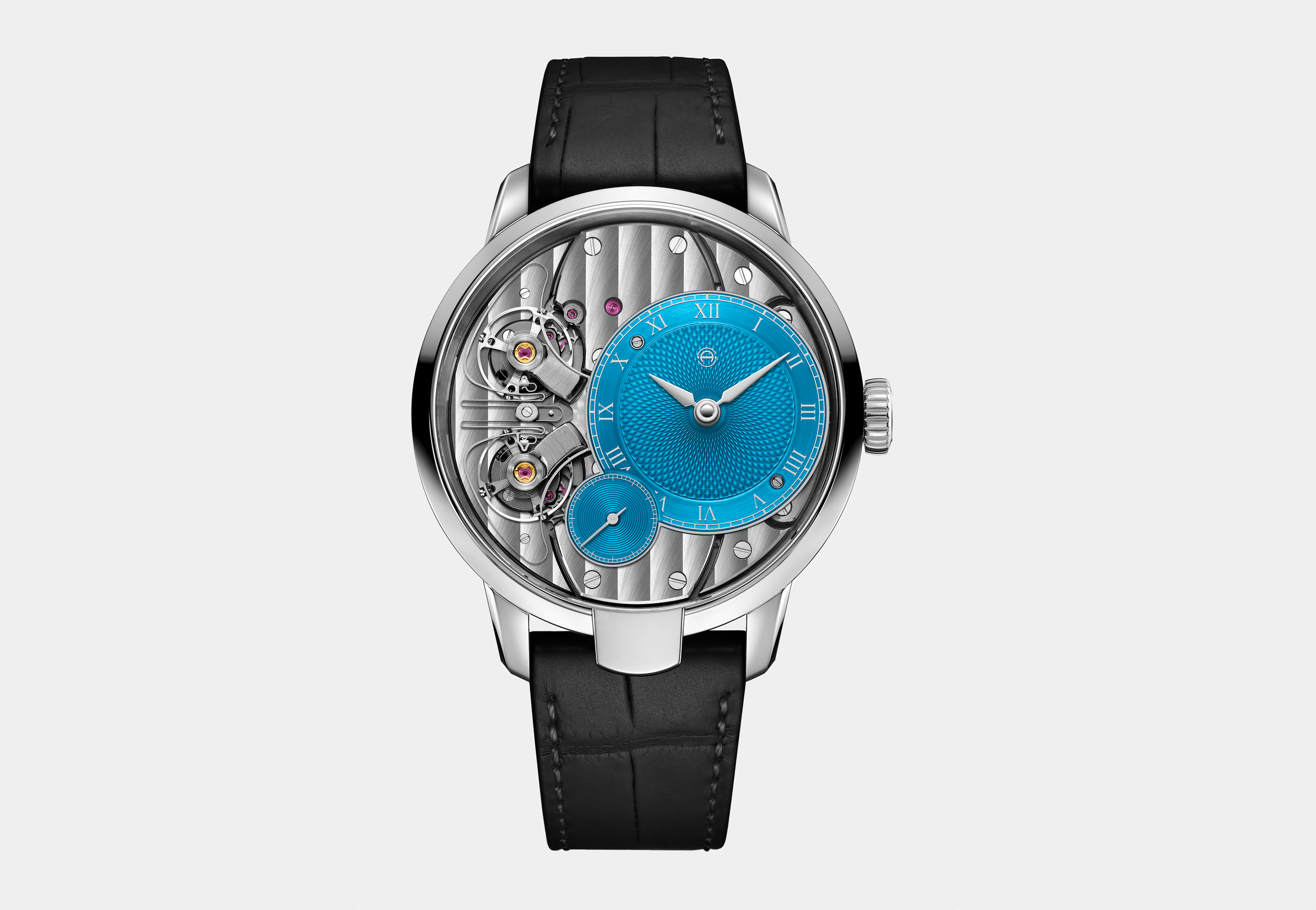 The Armin Strom Pure Resonance Sky Blue is limited to just three pieces and is delivered in the company’s classic 42 mm x 13 mm white gold case, which shares the same dimensions as the redesigned Pure Resonance that came out in 2018. Notably, the crown has been redesigned with a flatter profile for enhanced ergonomics.

Contrasting the gorgeous, wide, vertical Geneva stripes on the movement’s mainplate — and the perfect hand beveled and polished edges — is a sublime sky blue Kari Voutilainen hand guilloché off-center dial and subdial. Polished to a mirror finish by hand, lance-shaped hour and minute hands indicate the time along with the frosted outer ring that features a white transferred railroad track style ring for the minutes and Roman numerals marking the hours.

An intricate barleycorn guilloché in the center of the sky blue-colored dial — decorated manually at Voutilainen’s workshop — visually separates the middle from the circular-grained pattern of the outer ring. Overlapping the main dial, just enough not to significantly obstruct the 7 and 8 o’clock hour markers, is a matching sky blue small seconds subdial, also produced by hand-operated lathes at Voutilainen. Instead of the crisscrossing barleycorn pattern, though, the pattern underneath the sweeping second hand has concentric circles.

Emblazoned at twelve o’clock is the company’s minimalistic emblem instead of the large logo the spells out “ARMIN STROM” as was used on past Pure Resonance timepieces. This subtle design change is visually welcome as it helps you keep your focus on the beautiful Armin Strom movement, with its horologically complicated clutch spring that connects the dual balance wheels via Armin Strom’s resonance technology. Not to mention the punchy sky blue dial — and the expert level of craftsmanship that went into creating it.

The time displays receive their portioned energy from the lower regulator, while the upper regulator remains in place to create resonance, according to Armin Strom. “My primary objective was to improve chronometric precision via the consistent maintenance of a resonance state. But that consistency was also a prerequisite to sustaining a kinetic spectacle on the dial side of our watch. With a great deal of time and effort, our technical and aesthetic ambitions were both ultimately achieved,” Claude Greisler, Co-Founder and Master Watchmaker.

Based on the exact same caliber ARF16 used on the previous Pure Resonance models that were launched in 2018, Armin Strom claims that marine chronometer precision is achieved, although a specific adjusted rate is not stated. The in-house made 38-jewel manually wound 3.5Hz movement uses dual mainspring barrels to power the dual balance wheels and has a 48-hour power reserve.