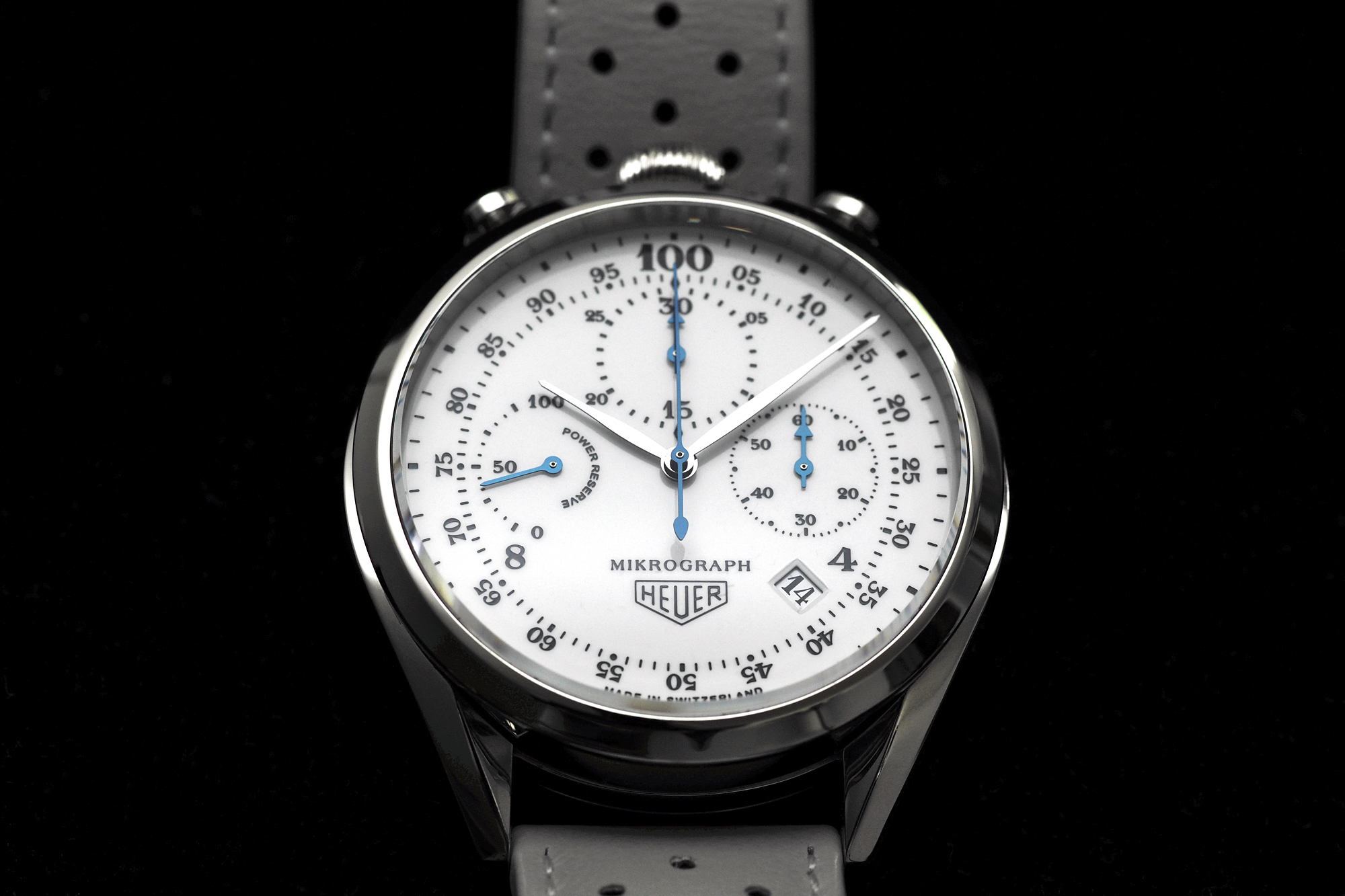 Invented by Charles-Auguste Heuer in 1916, the Mikrograph stopwatch (not designed to tell the time) was the first watch to measure elapsed time with 1/100th of a second precision, thanks to a chronograph mechanism that beats at 360,000 vibrations per hour (50Hz).

Almost 90 years later, the modern version of the legendary Mikrograph was resurrected by TAG Heuer, based on the same idea of using a 360,000 vph chronograph mechanism, but this time combined with the ability to indicate the time as well. This represented the first of the 1/100th of second chronographs to use the dual balance movement design which separates the timekeeping regulation (28,8000 vph – 4Hz), power, and transmission – from the chronograph regulation (360,000 vph – 50Hz), mainspring, and transmission. And in 2005, when the Carrera Calibre 360 Concept was launched, it became the first automatic chronograph wristwatch capable of 1/100th of a second precision.

Six years later, in 2011, a new Mikrograph, based on the same dual balance principle, but using a newer in-house developed, integrated 1/100th of a second chronograph, was introduced in rose gold as the Carrera Mikrograph, at a price of $50,000.

The Mikrotimer Flying 1000 boasts incredible 1/1000th of a second precision — thanks to a chronograph regulator that vibrates ten times faster than the Mikrograph or 3,600,000 vph. It was introduced alongside the Mikrograph at a price of $120,000. Not surprisingly, that timepiece was voted the 2011 Swiss Sports Watch of the Year at the Grand Prix de l’Horlogerie de Genève.

The following year, in 2012, TAG Heuer unveiled the astonishingly fast 5/10000th of a second Mikrogirder.

Altogether, there were two Mikrogirder versions shown off, as well as another timepiece called the Mikropendulum Tourbillon, that never made it to market. And maybe they will someday in the future, but for now, 1/100th of a second accuracy, or even 1/1000th of a second is quite enough, especially considering this is a mechanical watch and reading of the display starts to get tricky after 1/100th of a second.

Beginning with the original 1/100th of a second stopwatch in 1916, and then all of the subsequent models – including the insanely fast “Mikro” marvels that were introduced in 2011 and 2012 – the Mikrograph is largely symbolic of what TAG Heuer once was, as well as their evolution along the way, and where they are headed in 2017 and beyond.

Last year, TAG Heuer launched the TAG Heuer Calibre Mikrograph 100th Anniversary Special Edition that pays homage to the original Heuer Mikograph that was built in 1916. The “100 Years of 1916 Mikrograph – Numbered Special Edition” is limited to just 100 pieces, and boasts its predecessors legendary 1/100th of a second accuracy, and it can be worn on the wrist, mounted on a car dashboard, or set as a desk clock. The watch is now in a much smaller package, is self-winding, and features a dual balance system that separates the chronograph (stopwatch function) from the timekeeping (time and date) – whereas the first Mikrograph was a manually wound stopwatch that is can only be used to track elapsed time (there was no timekeeping function).

As I mentioned above, the watch is not just designed for your wrist, it can also be removed from its case and placed in the included dashboard holder or table-top display. The model we reviewed only came with the watch case, and so we did not test the other two included holders. We did, however, get to test the watch both mounted in the wristwatch case and outside of the case.

On the wrist, the 46 mm diameter case is absolutely wearable, although, ergonomically, it would be even nicer in a slightly smaller size. And this is completely feasible if the case is not detachable. Furthermore, removing the watch from its detachable case was fairly easy, but getting it back incorrectly, without scratching the sides, proved to be quite a challenge.

In your hand, the bull-head type top-mounted crown and pushers make sense, especially if you are timing events. Although, when I had the Mikrograph in my detached from the case, and in my hand, I found it too easy to lose a grip when pressing the pushers with the watch in one hand due to its size and shape. The convertible concept is cool, but I would personally prefer a slightly smaller (non-convertible) watch case, with pushers and crown on the right side. That said, the watch is quite attractive on the wrist and will surely appeal to those who like the Carrera style and can accommodate a 46 mm diameter watch.

Basically, one side of the movement keeps the time and date and is powered by its own mainspring power barrel (with a power reserve of 100-hours). The timekeeping side also has its own transmission, balance wheel, balance spring, and escapement operating at a common frequency of 4Hz. The other side, representing the chronograph, has a completely different mainspring (with an approximate runtime of 90 minutes), transmission, and balance system operating at 50Hz.

More importantly, I believe it symbolizes the next generation of the 1/100th of a second chronograph at TAG Heuer.

Both sides of the movement are wound by the same rotor that winds bi-directionally, with each direction winding one barrel. Accordingly, if the watch needs to be hand-wound via the crown, one direction winds the timekeeping mainspring and the other way winds the chronograph mainspring.

Unlike the Calibre 360, which uses a modular movement that combined an ETA 2893 base with a manually wound in-house chronograph module. The new Mikrograph caliber, which was first introduced in 2011, is a fully integrated automatic winding in-house chronograph.

And while the principle of using two completely different balance systems, transmissions, and power barrels did carry over from the Calibre 360 to the Mikrograph, not a single part was re-used for the modern design. It is worth noting, that according to Calibre 11, Atokalper (part of the Sandoz foundation) and Dubois Depraz, helped to design the movement.

It is cool to watch the dedicated balance wheel start and stop through the caseback, which you can see in the (video). This separate balance system, starting and stopping on its own, is after all how the watchmakers are able to achieve such a precise chronograph without affecting the rate of the timekeeping.

The white lacquer of this modern Mikrograph and black printed chronograph scale is reminiscent of the early from 1920s era Heuer stopwatches, including, the 1916 Mikrograph, shown above.

The hour and minute hands are treated in a black gold plating bath (that is not actually gold), resulting in a grayish color. Depending on the light, sometimes the hands would look dark gray or almost black, and other times they would look silver. Regardless of the color, the hands were always easy to see. However, the dial was clearly designed with an emphasis on the 1/100th of a second function, over reading the hours and minutes at a quick glance.

The other hands, including the 30-minute chronograph counter, central chronograph seconds hand, 100-hour power reserve indicator, and 60-second small seconds display are all in blued steel. “MIKORGRAPH” and the old Heuer logo are printed in black at 6 o’clock. There is a date window at 4:30, which I wish was not there as it just adds clutter to a dial that has a lot going on already.

The latest Mikrograph represents more than a just special numbered edition convertible timepiece. The convertible case is an interesting feature. And the white lacquer dial is an attractive throwback to the original that adds collector appeal to the 100-piece numbered edition. However, in the grand scheme of things, I think this 100th Anniversary model may also represent the beginning of a new generation of Mikrographs that are non-limited editions produced at much higher volumes, and priced accessibly.