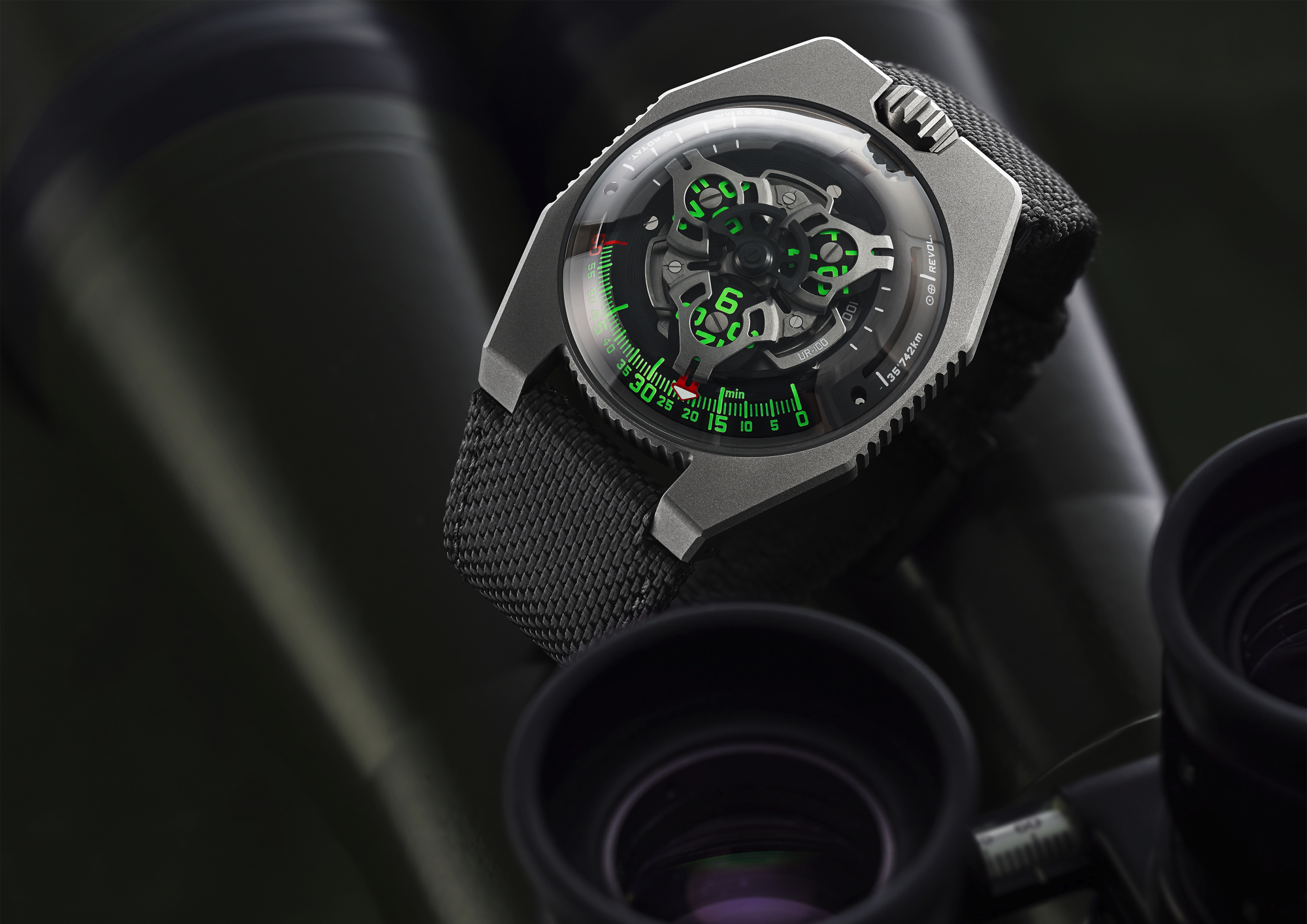 Urwerk debuted the UR-100 SpaceTime in September of last year. Yesterday, the independent Swiss watch company — known for its futuristic designs — announced a new version called the UR-100 GunMetal.

Featuring the same functions and dimensions as the original UR-100, the “GunMetal” moniker replaces “SpaceTime,” really only to denote a change in the material used for the case. This time the 41 mm x 49.7 mm 14 mm case has been crafted from titanium and stainless steel and has a light gray gunmetal PVD finish.

Like with the previous version, the new GunMetal UR-100 displays the (wandering) hours with three rotating orbital satellites. Minutes are indicated by a red hand that goes across a retrograde arc and then back to zero.

However, before going back to zero, the red hand (which is actually another hand entirely) passes underneath and between the subsidiary dials, reappearing to display two new astronomical indications: distance traveled on Earth and distance travel by Earth (around the Sun).

The first indicator at 10 o’clock evaluates the distance in kilometers that we have traveled on the Earth. It’s based on the average speed of the rotation of the Earth on its axis at the equator, covering a distance of 555 km every 20 minutes.

Then, at 2 o’clock, the red hand (a third hand) continues on to show the distance the Earth has traveled in its orbit around the sun, which is 35,740 km every 20 minutes.

The UR-100 GunMetal is powered by caliber 12.01, with an automatic winding rotor that’s regulated by a flat turbine, referred to as a Windfäng (Swiss German for “air trap”) that minimizes shocks to the rotor bearing and reduces over-winding and wear and tear. The rotor, which is partially supported on its periphery by the flat turbine, has a large diameter, resulting in a lower mass and therefore less wear.

The watch beats at a rate of 4Hz, has 39 jewels, and a 48-hour power reserve. The orbital satellite hours turn on Geneva crosses in beryllium bronze, with an open-worked aluminum carousel, and triple baseplates in ARCAP. The components have been finished with circular graining, sanding, brushing, and chamfered screw heads.

As with the UR-100 SpaceTime, quantities remain limited to 25 pieces for this iteration. However, the price of the gunmetal version of UR-100 is $2,000 higher than the original two models. Retail is $51,000.