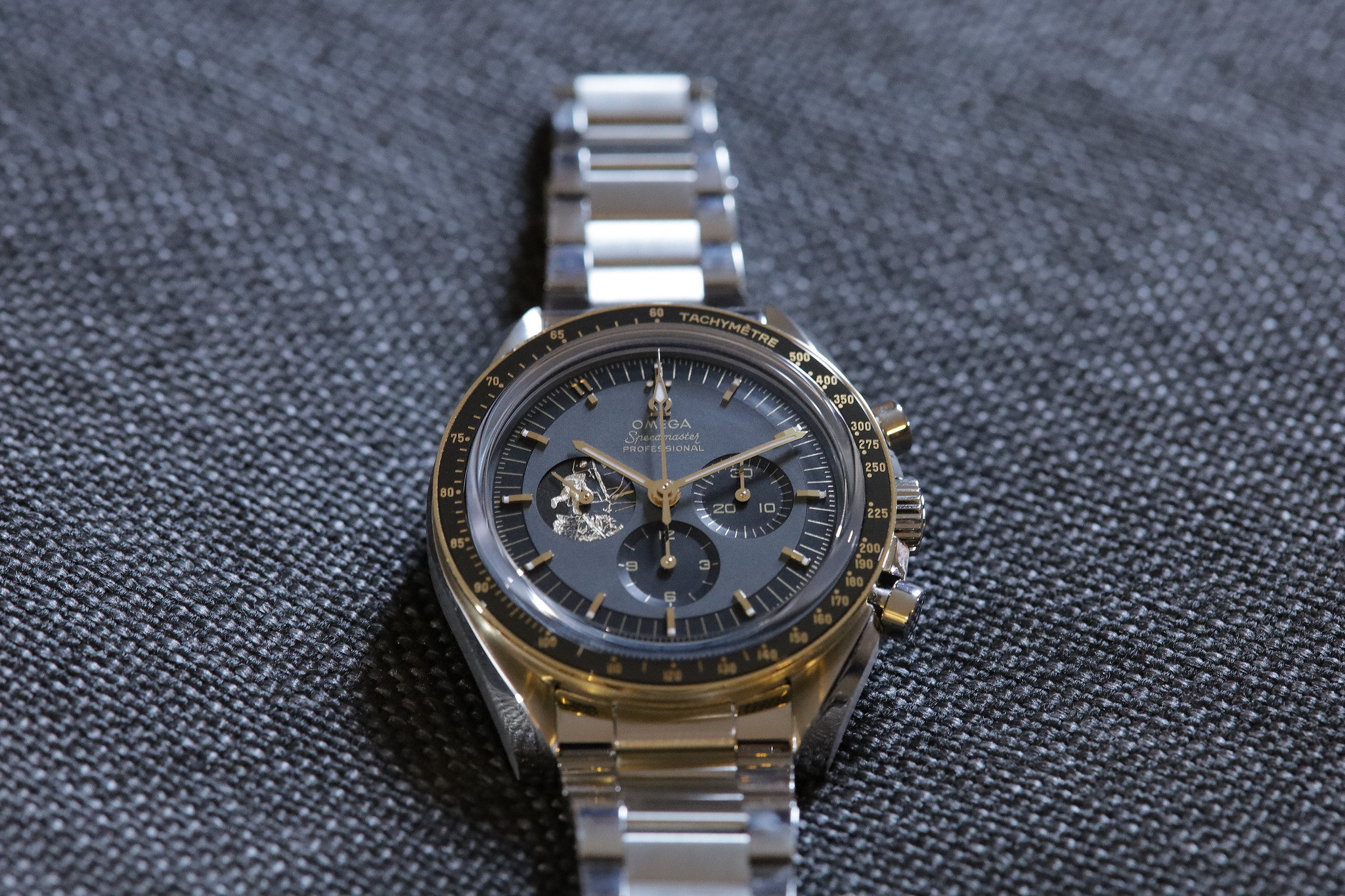 Apollo 11 was the NASA spaceflight that first landed humans on the moon. While Michael Collins flew the Command Module Columbia in lunar orbit, Neil Armstrong and Buzz Aldrin landed the Apollo Lunar Module Eagle on the surface of the moon. That was July 20th, 1969 – making 2019 the 50th Anniversary.

Even though NASA qualification existed on previous space flights, the Omega Speedmaster’s most famous spaceflight was Apollo 11 – something that still to this day helps solidify the Speedmaster Moonwatch is one of the most well-known wristwatches on the planet.

Naturally, Omega has used this, and all NASA spaceflights, to effectively market the Speedmaster Moonwatch from the 1960s until now. Perhaps to the point of overusing the affiliation with NASA, space flight, lunar exploration, Buzz Aldrin, and so forth. Nonetheless, American Optical, Victorinox, Hasselblad, and others use their association with Apollo 11 as a marketing tool as well. Although none as profusely as Omega. That said, when you think about the fact that the crew of Apollo 13 used a flight-qualified Speedmaster Moonwatch to precisely time their re-entry (manually), due to an onboard malfunction, which saved their lives, one could argue that Omega has proven to be the most crucial consumer/professional product ever utilized in spaceflight.

Armstrong was the first to step foot on the moon, followed by Aldrin. And it was Armstrong who photographed Aldrin stepping out of the lunar module, which is depicted in the gold embossed motif on the small seconds counter of the Omega Speedmaster 50th Anniversary Limited Series, located on the dial at 9 o’clock. Being that the image is of Aldrin’s posterior, has been widely mocked online, however, the detail is far more subtle than I would have thought, plus it is after all, historically accurate.

Jokes aside, this is one serious wristwatch – powered by the all-new caliber 3861, fitted with a badass throwback steel bracelet, accented with 18K yellow gold hands, indices, and bezel, along with a black ceramic bezel insert, and a recreation of Armstrong’s famous footprint on the lunar surface in moondust on the Naiad-lock caseback. Further, the dial features a black, gold and moondust gray color scheme, which like the rest of the watch – is quite attractive.

At Omega’s request, I wore this watch for a few weeks, including at the 2019 New York Watch Time and Windup shows in October. During that time I enjoyed wearing it quite a bit, to the point that when I got the call from Omega’s PR agency to return it, I did not want to give it back!

There are many more details of the 50th Anniversary Speedmaster that add value, compared to, for instance, the Limited Edition Speedy Tuesday Speedmasters from 2017 and 2018. Such as the all-new caliber 3861 movement, 18K yellow gold highlights, and a vintage-style steel bracelet which is perhaps the sexiest Omega has ever offered – to name a few. Even compared to the Snoopy LE Professional Speedmaster, I’d prefer this, although so far no modern Speedmaster has the incredibly high resale value of the Snoopy (relative to retail). The Speedmaster 50th Anniversary Limited Editions in Platinum and Gold are pretty cool too, but those, of course, cost many times more than steel, and are much heavier due to their precious metal cases.

Ultimately, if you don’t like Limited Editions and/or want the best value, just get the regular steel Speedmaster Professional Moonwatch. The standard Professional Moonwatch in stainless steel is a phenomenal value at $5,350. So much so that really the only issue with the 50th Anniversary LE – is the premium you pay. It’s $2,300 higher than the Snoppy retailed for, it costs $2,550 more than the Ultraman, and carries a $4,300 premium over a standard Speedmaster. If Omega included the caliber 321 movement instead of the 3861, the price would make a lot more sense. And sure, there’s also the Platinum Speedmaster which comes with the second generation caliber 321, but the problem is that it’s platinum and has a price tag of $55,000.

The retail price is $9,650 (and the watch is sold out at retail). Read our original article here.